Thousands take part in Birkat Kohanim at the Western Wall

Jewish worshipers were undeterred by recent tensions and flocked to the Old City to receive the Priestly Blessing.

Dozens of people - secular, religious and ultra-Orthodox, as well as tourists who are not Jewish - took part in the traditional Birkat Kohanim (Priestly Blessing) at the Western Wall on Thursday morning.

The blessing, a Jewish prayer recited by Kohanim (Jewish priests in direct patrilineal descent from Aaron), is regularly performed during Chol HaMoed Pesach (the intermediate days of Passover) and in Sukkot.

Tens of thousands of Jewish worshipers did not let the recent tensions deter them from flooding the alleyways of the Old City under tight security in order to receive the blessing of the Kohanim, the descendants of the Levi tribe - during both the Shacharit prayer and the Mussaf prayer. 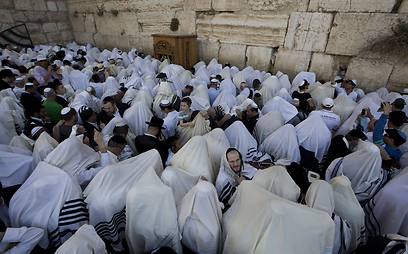 (Photo: EPA)
The blessing is performed every morning every day of the year in any prayer that has at least one Kohen, but the Chol HaMoed period presents a rare opportunity to be blessed by so many Kohanim at the same time. The Priestly Blessing at the Western Wall usually takes place on the second day of Chol HaMoed, to allow those who come from overseas to take part, as they celebrate "Yom tov sheni shel galuyot" (the second festival day in the Diaspora) on the first day of Chol HaMoed and can therefore not arrive at the Western Wall. The Western Wall Rabbi Shmuel Rabinovitch led the prayer, and Israel's Chief Rabbis Yitzhak Yosef and David Lau were also in attendance. At the end of the blessing, the Kohanim also bless the pilgrims who came to Jerusalem. The mass prayer at the Western Wall, which started during the War of Attrition (in 1970) has been taking place for over 40 years - twice a year. The custom was brought back by Jerusalem resident Rabbi Menachem Mendel Gafner. During one of his prayers at the Western Wall, Gafner remembered a midrash (talmudic legend) that describes the unique nature of the priestly blessing, even after the destruction of the Temple - and decided to restore the ritual to its former glory. His grandson, Rabbi Baruch Brandwein, says that ever since the ritual was restored, over 100 mass events of the Priestly Blessing took place in the Western Wall.

פרסום ראשון: 04.17.14, 12:50
commentsend to friendshareshare
See all talkbacks Close all talkbacks
new comment
Next
Previous
Warning:
This will delete your current comment
cancelOk