Revisiting the West Bank a decade after the Intifada
Photo: GPO

Co-existence groups promote tours of West Bank cities and sites to Israelis who are curious about their Palestinian neighbors.

This bustling center of Palestinian life is just a 20-minute drive from Jerusalem, but for Israelis it might as well be on the other side of the world.

Since a major round of Israeli-Palestinian fighting more than a decade ago, Israelis have been kept out of Palestinian cities by the Israeli military and their own fears. But after several years of relative calm, a few have begun trickling back in tours led by Palestinian guides and guarded by plainclothes Palestinian security agents. 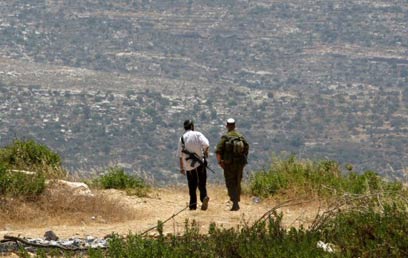 On Wednesday, about two dozen visitors, Israelis and a few foreigners, visited the mausoleum of Palestinian leader Yasser Arafat and a shrine to national poet Mahmoud Darwish – though hopes of talking to local residents went unfulfilled.

The trip fell in the week of the Jewish holiday of Passover, and those observing religious tradition unwrapped matza, or unleavened bread, during lunch at a local restaurant, as Arabic music played in the background.

The tour also came as another US attempt to broker an Israeli-Palestinian peace deal appeared doomed. 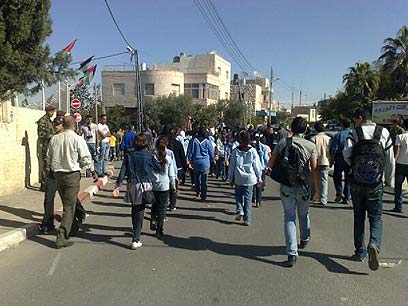 Gershon Baskin, an organizer, said such trips are needed, nonetheless, to foster understanding after years of enforced separation that deepened the divide between the two peoples. "There will never be peace in this land unless the people living on the land talk to each other and... drop these walls of fear, animosity and hatred," he said.

While some Palestinians, especially shopkeepers, would welcome large numbers of Israeli visitors to their towns, others dismiss the possibility of normalizing relations while the Israeli military presence in the West Bank continues. "Normalization is the attempt to deceptively project something abnormal as if it were normal," said Omar Barghouti, co-founder of a Palestinian-led movement of boycott, divestment and sanctions (BDS), aimed at ending occupation and what it considers other violations of international law. "Ethical co-existence can only come as a result of ending oppression and injustice," Barghouti said in an emailed comment. "Israelis who support comprehensive Palestinian rights under international law and 'co-resist' oppression are welcome." 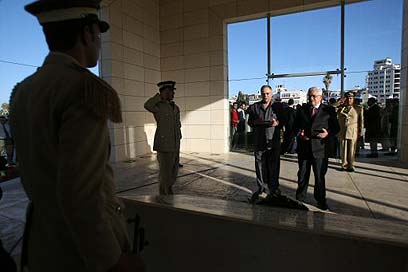 Abbas at Arafat memorial (Photo: AFP)
One of the stops on Wednesday's itinerary, the village of Nabi Saleh, was canceled at short notice because of an internal Palestinian debate over what constitutes acceptable relations with Israelis. Like several other villages, Nabi Saleh has been holding weekly protest marches against Israeli practices in the West Bank, including the confiscation of land. Israeli and foreign activists often join those protests. "Usually, we accept these (visiting Israeli) groups," said Bassem Tamimi, a Nabi Saleh protest leader who has repeatedly been arrested and jailed by Israel. He said Wednesday's visit was called off because there was a sense that Palestinian public opinion is largely against Israeli visits to Ramallah and attempts at normalization. The Israelis came to Ramallah with their own issues, including security concerns, but also a lot of curiosity. "The Palestinians are our neighbors," said Tel Aviv resident Gavin Gross, 52, an immigrant to Israel from New York City. "We are right on top of each other. Jericho, Bethlehem, Ramallah, they are short drives from Jerusalem, and I can't sit here and think that there's something there that I am not allowed to see. That's why I'm here." Gross said he last visited Ramallah in 1999, spending an enjoyable evening at a jazz club. It was a time when the two sides seemed close to a deal on setting up a state of Palestine alongside Israel. However, US-sponsored talks on a partition of the land between the Mediterranean and the Jordan River collapsed in 2000 and were followed by several years of fighting. 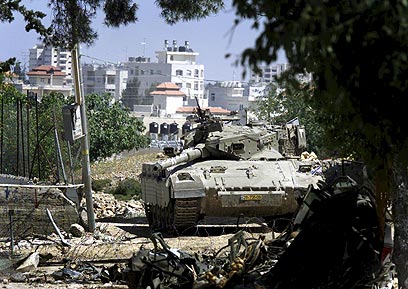 Those years marked the bloodiest period since Israel captured the West Bank, Gaza and east Jerusalem in the 1967 Six Day War. Several thousand Palestinians were killed, including in clashes with the Israeli army, while hundreds of Israelis were killed in bombings and shootings by Palestinian militants.

An event seared into the collective consciousness of Israelis came shortly after the outbreak of fighting. On Oct. 12, 2000, two Israeli reserve soldiers who had made a wrong turn en route to their base were beaten to death by a Palestinian mob that broke into a Ramallah police station where the two were being held. Since 2000, Israel's military has barred Israelis from entering Palestinian towns and cities, with large red road signs in Hebrew warning those ignoring the ban that they break Israeli law and put their lives at risk. At the same time, about 550,000 Israeli settlers live in the West Bank, including about 350,000 in the 60 percent of the West Bank that remains under full Israeli control.

Israel has also erected a physical divider of cement slabs and fences in the West Bank. Israel says the barrier is meant to keep out militants. Palestinians, pointing to stretches of the barrier that jut into the West Bank territory, say it's a land grab.

Despite a sharp drop in violence, partially due to the construction of the security barrier, Israeli army raids still turn deadly from time to time while Israelis in the West Bank occasionally come under attack by militants. Last week, an assailant fired at Israeli cars in the West Bank, killing Baruch Mizrahi, a 25-year veteran of the IDF and a chief superintendent in the Israel Police.

An Israeli permit system, meanwhile, has prevented most Palestinians from entering Israel since the 1990s, further reducing contact. Older Palestinians who used to work on Israeli farms, in restaurants and construction sites in the tens of thousands can converse in Hebrew, while many younger Palestinians don't speak the language. Those joining Wednesday's tour, organized by IPCRI, an Israeli-Palestinian group promoting co-existence, had to apply for special army permits to enter Ramallah. Since 2013, IPCRI has organized several trips for Israelis to the West Bank. With new funding, it now hopes to organize several tours a week, said Baskin. Itai Artzi, a 27-year-old sociology student from Jerusalem, said it was his first chance to visit Ramallah. Artzi said he had hoped to get to know Palestinians better and "go through the psychological barrier that the Israeli government is trying to put between Israelis and Palestinians." Gross said he would have preferred less politics on the trip and more chances to speak to people about plans for the future. In the end, the group didn't get to talk to Ramallah residents. The hosts seemed eager to rush the visitors through the stops to avoid any possible incidents. Even at the local restaurant – where US Secretary of State John Kerry once stopped for lunch during one of his many mediation trips in recent months – they were ushered into a separate room. Palestinian guide Osama Elewat said that despite limitations, he believes the tours can help shape Israeli public opinion. "I believe this is the best way to show... that we can build our state, that we can take responsibility," he said.