Mimouna in Ashdod: 'For men only'

A public invitation to Mimouna, the post-Passover feast, in Ashdod on Monday stated that it would be a male-only event. The invitation was emblazoned with the city hall logo, though representatives claimed that the municipality never agreed to sponser the event and the invitation had been published without their approval.

Along with the municipal symbols, the invitation bore the logos of institutions indentified with the Shas political party. The Sephardi Chief Rabbi of Israel Yitzhak Yosef was listed on the invite as a key participant in the event along with Shas party leader Aryeh Deri and Yehiel Lasri, the mayor of Ashdod. 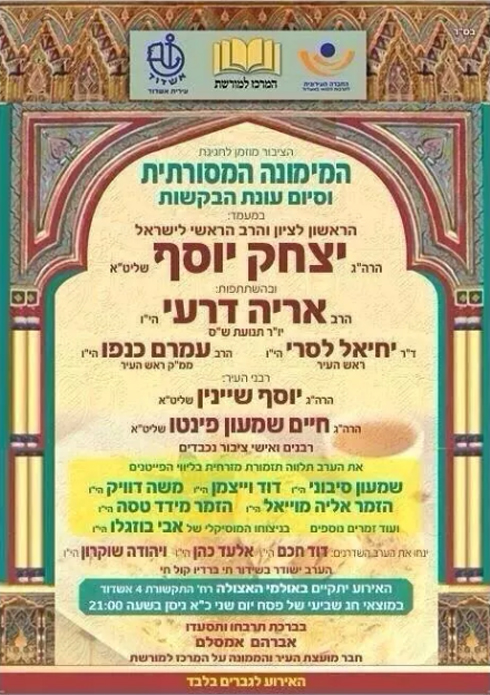 Hebrew invitation to Mimouna in Ashdod that labels the event as 'for men only.'

Mimouna is the traditional Moroccan celebration marking the end of Passover and is held in cities across Israel annually, making it a landmark event on the Israeli culture calendar.

The city's residents seemed unsettled by the news. One Ashdod resident told Ynet, "I can't remember such an event where women weren't allowed to attend. I won't be surprised if women work on preparing food for the event, but won't be let in." "It's hard for me to believe that such events are held in Ashdod in 2014," she said. The resident added that she expects public representatives and especially the mayor to boycott the event which according to her, "sends a very, very clear message that we live in a city that's managed in ways that are identified with the past."

The Ashdod Municipality denied any involvement: "The municipality is not organizing a Mimouna event today, so this is not a municipal event. The use of municipal symbols occured without approval."

"Two events will take place tomorrow organized by the Events Department, including the traditional Mimouna celebration in Ben Gurion Park as well as the eighth Academic Mimouna Conference."