New report says 1/3 of Israel's survivors requested aid, 60% of needy living on only 3,000 shekels a month.

Fifty thousand of the country's 193,000 Holocaust survivors live beneath the poverty line while one-fifth have had to cut back on food and medicine in the last two years due to financial difficulties, a report by the Foundation for the Benefit of the Holocaust Victims in Israel released Wednesday said.

The report, released just days before the Holocaust Memorial Day, said that 36 percent of survivors in Israel live alone and 10,000 are childless.

A survey of 400 survivors included in the report found that 50 percent of them feel isolated and lonely while over one third of Israel's survivors approached the foundation for aid last year. According to the Finance Ministry, most of those seeking help earned low paychecks and were labeled as "needy."

The foundation said that 86 percent of those who approached them for financial aid live on less than 5,000 shekels per month and 60 percent saw an income of just 3,000 shekels each month.

Of the survey's participants, 86 percent expressed pessimism for their finances in the future, and 55 percent said that they are displeased with the way the government treats them. More than 60 percent said that there has been no progress in their treatment over the last year and 43 percent believe that another Holocaust could occur in the future. 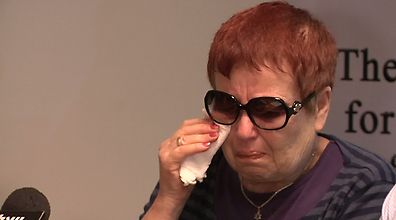 Some Holocaust survivors such as Chaya Kozikaro (above) who applied for financial aid were left in poverty when they didn't meet required criteria. (Photo: Yogev Atias)

However, some will still have difficulties receiving aid like Chaya Kozikaro, age 76, who didn't match the required criteria to receive help.

"Me and my husband who's also a Holocaust survivor, aren't officially recognized as survivors just because of the year that we moved to Israel in 1953," she said behind her tears.

"We live on what we receive from the National Insurance Institute but it's not enough," she said. "We spend thousands of shekels every month on medication. Sometimes we just want to end our lives, how much longer will we live?"

The Finance Ministry said that the budget for the program will be added to the 835 million shekels which was allocated to Lapid when the current government was formed to aid Holocaust survivors for the next five years.

A central clause in the program raises the minimum subsidies paid to 90 thousand survivors from 1,825 to 2,200 shekels per month while the maximum payments will remain at 5,400 shekels. The cost of this clause amounts to 166 million shekels.

The program also includes a clause setting aside 130 million shekels that will allow all survivors to receive their required medications for free. Holocaust survivors are currently paying 50% of the price of certain medications, but the new program will eliminate these costs as well.

The Foundation for the Benefit of the Holocaust Victims in Israel released statics last January saying that more than 1,000 Holocaust survivors pass away each year and that their average age stands at 85.

The foundation noted that as the ageing of Israeli survivor population increases, so do their medical needs. One-third of survivors are already dependant on nursing care and every month the foundation receives an additional 600 requests for help.

The Chairman of the Foundation for the Benefit of the Holocaust Victims in Israel, Avi Dichter, praised the new government program saying, "This is a dramatic decision. It's the first time that the government of Israel has gotten around the bureaucracy and is giving grants to survivors instead of refunds."

Dichter also said, "The government still hasn't identified the population who will receive the additional aid. We can already identify a few thousand survivors who may not get a reply. However, the money that some survivors will receive, instead of nursing services that they were given until now, will help close their overdrafts with the banks."

Chief Executive of the foundation, Rony Kalinsky said, "Starting in 2015, the number of survivors living in Israel will decrease, but the increase in their needs will continue until then. It's a critical period when we expect an increase in requests for help."