The PLO's central council adopted a plan on Sunday to pursue the attempt to join 60 United Nations bodies and international agreements, according to a statement from the governing body of the Palestine Liberation Organisation.

The council, held under the auspices of Palestinian President Mahmoud Abbas, "affirms the need for the Palestinian leadership to continue membership of UN agencies and international conventions, under the Palestinian plan that was adopted," the Palestine People's Party secretary general Bassam al-Salhi said in a statement.

Israel suspended US-sponsored peace talks with the Palestinians on Thursday after Abbas announced a unity pact with the rival Palestinian group Hamas which is viewed by the United States, the European Union and Israel as a terrorist organization.

However, the move came as talks were already on the brinks of collapse. Negotiations began to destabilize after Israel failed to release a group of Palestinian prisoners it had promised to set free as part of peace talks. The move prompted Abbas to sign applications to join 15 international conventions, a move that shocked the US sponsors of troubled Middle East peace talks, and was reaffirmed and even expanded in the Palestinian announcement late Sunday night.

In the press release, in addition to the UN bid, the Palestinian Central Council stated that "for a resumption of negotiations, Israel must agree on the reference to the 1967 borders in accordance with UN resolutions, completely stop settlement construction and move to Palestinians prisoners."

The PLO further said it gives Israel "three months to reach an agreement on the 1967 borders prior to any discussion on any other matter whatsoever, including security, to reach a peace agreement."

The council also said it views Israel as responsible for the failure of peace talks, only two days before their end of April deadline.

Some claimed the Palestinians original bid to join the international organizations was carefully limited to avoid American retaliation.

At the times, Reuters claimed Abbas's action may have been designed more as a symbolic act of defiance to shore up his tenuous standing among Palestinians frustrated at the diplomatic impasse with Israel over their goal of statehood than a knife in the heart of peacemaking. As a non-member state in the United Nations, Palestinians can join 63 international agencies and accords. However, by only signing conventions dealing with social and human rights instead of seeking full membership in UN bodies, the Palestinians' foreign minister said they would not provoke US sanctions. 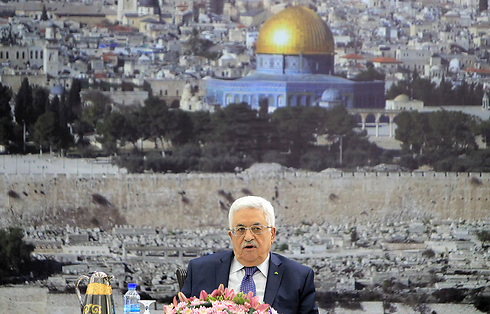 Mahmoud Abbas. Move to sign applications to join international conventions shocked US sponsors peace talks.
"Frankly speaking, I don't expect any consequences coming from the US Congress regarding this step at all," Riad al-Malki told reporters at the beginning of April. "We did not talk about us becoming members of the UN specialized agencies in order for the Congress to activate their decision. We are talking about and we are still talking about letters of submission to protocols and conventions, and that's it." Abbas inked the 15 conventions in search of more leverage against Israel after it refused to free a batch of Palestinian prisoners under terms of a previous agreement. Israel, in turn, said it would not release those detainees without a Palestinian commitment to continue negotiations beyond an initial end-of-April deadline, which now seems unavoidable. US officials criticized what they called "unhelpful, unilateral actions" by both sides. Abbas's limited self-rule administration in the Israeli-occupied West Bank is dependent on US support. Around $500 million in annual aid to the cash-strapped Palestinian Authority helps keep its bloated public sector and security forces afloat. But Congress has repeatedly docked payments as punishment for Palestinian political decisions it disagrees with, including an earlier bid for statehood recognition. A 1990 law also bars US funding to UN bodies which recognize a Palestinian state. The law put the United States in the awkward position of losing its right to vote in the cultural and educational body UNESCO last year after Palestinians acceded to it in 2011. The UN General Assembly voted to recognize Palestine as a non-member state in 2012, entitling them to join the accords which Abbas signed up on Tuesday, including conventions against discrimination against women and for the rights of disabled people as well as the Geneva Conventions. They burden the Palestinians with few binding commitments on their government, which has been accused of corruption and abuses of detainees and journalists. Nor do they court retaliation by immediately empowering them to lodge legal complaints against Israel or rattle US foreign policy, a senior UN official told Reuters at the time. "The nuclear option for Abbas would be to go for the International Criminal Court and International Atomic Energy Agency. Those are the ones that matter," the official said. "(The latest signing is) actually quite a clever move. Abbas is saying that the Palestinians want to be part of the global community and improve its state building mechanisms by signing up to a load of well-meaning conventions. He can turn around and say, 'Why should Israel feel threatened by us signing a convention protecting women's rights?'" Peace moves by Abbas, a veteran negotiator who has chosen diplomacy over the violent militancy espoused by his predecessors and Palestinian rivals such as the Islamist Hamas, which controls Gaza, have not been welcomed by his countrymen. Campaigns for recognition at the United Nations, while mostly symbolic, have been praised by many Palestinians. The 78-year old president - who saw his term expire over five years ago but remains in office because of a stalemate with Hamas over conditions for the next elections - may have been keen to shore up his appeal after Israel over the weekend failed to free a fourth and final group of over two dozen Palestinian prisoners as part of a pledge to restart peace talks last year. "That's when he reached his endpoint and said, 'I've got to do another measure that's going to improve my popularity,' and going to the U.N. has so far been successful in terms of boosting his popularity," said Diana Buttu, a former legal adviser to Palestinian peace negotiators.

"But as a measure, it's a weak one. He didn't go all the way to hold Israel accountable and he didn't abandon negotiations."