The March of Living at Auschwitz (Archive)
Photo: EPA

Remembering Hungary's Jews at March of the Living

Some 12,000 people from dozens of countries worldwide, both Jews and non-Jews, took part Monday afternoon in the March of the Living from Auschwitz to the Birkenau extermination camp, to mark Israel's Holocaust Remembrance Day.


This year, the march marks 70 years since the accelerated extermination of Hungarian Jews in 1944, spearheaded by Adolf Eichmann.

With Israeli flags and dressed in blue rain jackets, the participants were walking a 3-kilometer (2- mile) distance from the gate to a memorial in Birkenau, where Hungary's President Janos Ader is to make a speech to honor the victims.

Participants will be joined by a special train that left from Budapest - following Sunday's March of the Living in Hungary - to Auschwitz. 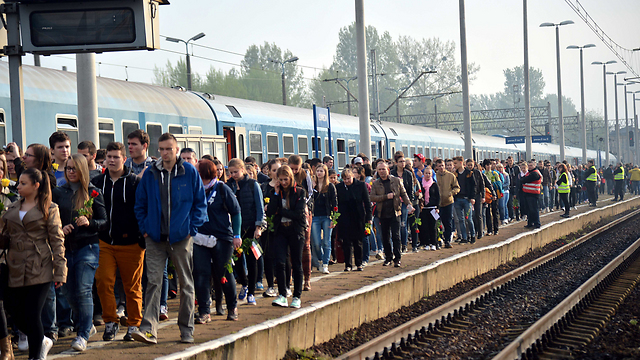 The Train of the Living leaving Budapest (Photo: Yossi Zeliger)
The march began with remembering the genocide in Rwanda, the mass slaughter in the Balkan and the murder of tens of thousands of innocent people in Syria.

"We started the March of the Living 26 years ago to send a message against anti-Semitism and xenophobia. Unfortunately, our efforts have yet to bear fruit," the March's organizers said.

The delegation from Israel includes representatives from Israel Police - including Commissioner Yohanan Danino, a group of Supreme Court judges, Holocaust survivors, director-generals of ministries and many teenagers. 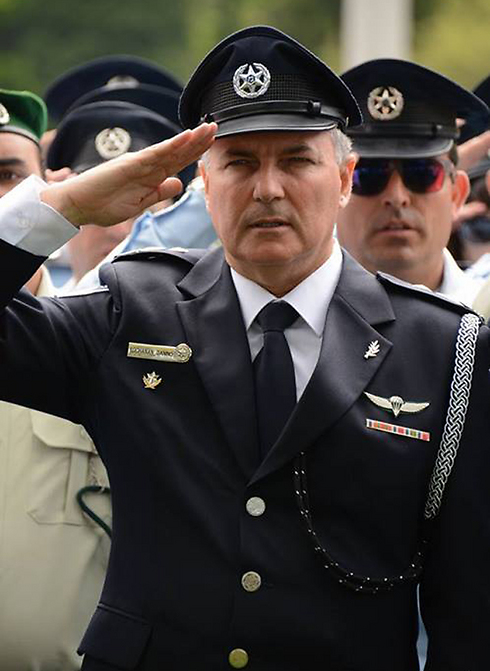 Police Commissioner Yohanan Danino at the March of the Living in Budapest.
The weather may make the walk difficult and cause delays, as it's been pouring rain since the early morning hours.

One of the passengers on the "Train of the Living" from Budapest to Auschwitz was Catherine Zummer, who at the age of 6 was taken with her mother, siblings and hundreds of other Jews by the Hungarist pro-Nazi Arrow Cross Party to one of the mass executions the Hungarian fascists done at the heart of the capital. 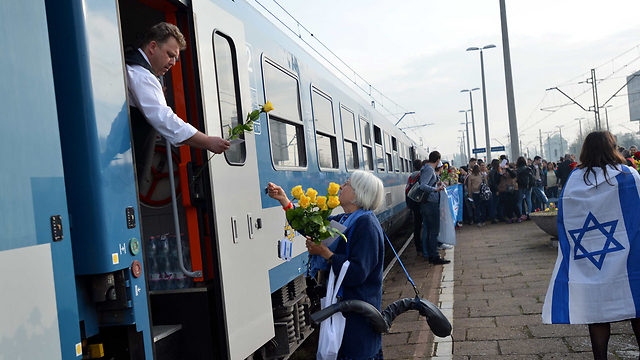 The Train of the Living (Photo: Yossi Zeliger)
Zummer, who is 75 years old today, still remembers the people who stood in long lines along the Danube River waiting for their turn to die.

She was saved thanks to a tall, smiling man who arrived at the scene after one of the nearby houses' residents called the Swedish Embassy. The mysterious man talked to the pro-Nazi party activists and convinced them to free many of the women and children. Later, Zummer's mother told her that the man was Swedish diplomat Raoul Wallenberg, who was later designated as one of the Righteous among the Nations. 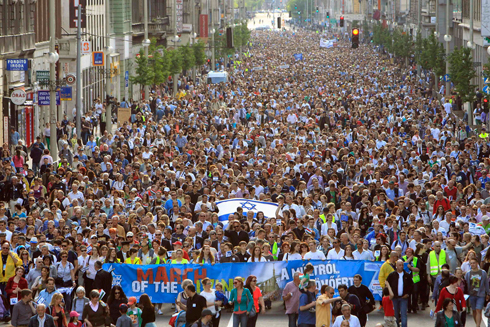 The March of the Living in Budapest (Photo: Reuters)
This summer would mark seven decades to the operation to wipe out the Jews of Hungary near the end of World War II. Miklós Horthy's dictatorship regime may have stopped sending the Jews to extermination camps during the fighting due to international pressure, but after the Nazis took over Hungary in March 1944, aided by local allies, they managed to kill half a million Jews in six months. Before the operation, many of the Jews in Budapest were sent to Poland on trains - transfers that stopped only in July of 1944. After the Arrow Cross Party took power at the end of 1944, the extermination of Hungarian Jews was renewed, this time by killing Jews out on the streets and throwing their bodies to the Danube River.

This year's March of the Living focuses on the Hungarian Jews' Holocaust not just because of the historic significance, but also due to the increasing of anti-Semitism in Europe and the rise of the fascist right.

The Associated Press contribured to this report.