Hamas displays massive show of force in Fatah stronghold Ramallah after years of being confined to Gaza. Hamas official to Ynet: 'Coexistence with Israel is possible.'

Over a thousand supporters of the Islamist group Hamas marched through the streets of a West Bank stronghold of its rival Fatah party on Wednesday, testing a surprise Palestinian unity pact the two signed last week.

The rally in Ramallah, the Palestinians' de facto capital in the Israeli-occupied territory, followed a funeral in the city's main mosque for Hamas militants killed by Israel in 1998. Their bodies were released from Israeli custody this week, the deal was first reported by Ynet. 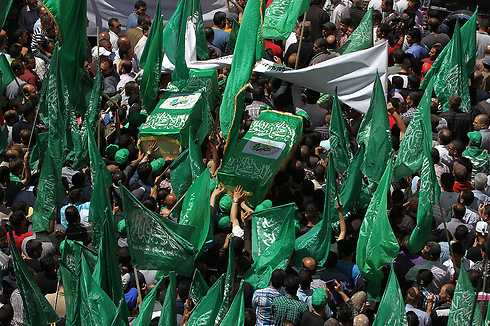 One of Hamas' West Bank leaders and former Palestinian minister for prisoner affairs, Safi Kabaah spoke to Ynet, and said: "Hamas never stopped existing, despite the blows Israel has deal t it and despite the persecution by (Fatah's) Palestinian security forces, Hamas is an idea and ideology that cannot be taken out."

Kabaah said that despite the fanfare the Palestinian unity deal inspired, it is still far from certain it would actualize: "Israel objects to the unity deal, and the PA is under massive pressure, but Palestinian blood is one. "

Kabaah also expressed hope that coexistence with Israel would be possible: "If Israel gives the Palestinian people their rights, then a type of coexistence can take place." 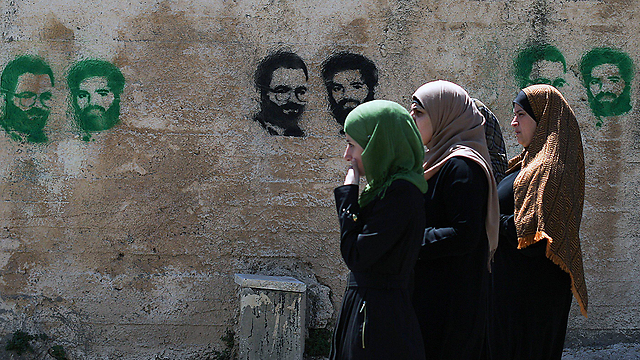 Wednesday's funeral was one of the largest gatherings by Hamas in the West Bank since the two parties came to blows in 2007, when the Islamists seized Gaza. Mutual suspicion between the two groups, and arrests, became commonplace thereafter.

"We've been under pressure and under surveillance for a long time. I hope this is the beginning of something new," said Muhammad, a mourner whose young son bounced in his arms waving Hamas's trademark green flag.

"We just want to live as one people. Peace talks with Israel have failed for decades, and I think we must maintain our option of (armed) resistance. But I support finding a way forward together," he added, wary of giving his full name.

Israel suspended US-backed peace talks it was having with Fatah chief and Palestinian President Mahmoud Abbas in the wake of his deal with Hamas, which is sworn to Israel's destruction. At the United Nations on Tuesday, Israeli and Palestinian envoys traded blame for the talks' collapse.

Hamas and Fatah agreed to form a unity government of independents within five weeks and hold a national election after at least six months, but the rapprochement looked tenuous given the persistence of deep political differences.

While Abbas has promised the new government will back his policy of seeking to revive peace talks to achieve a Palestinian state in Gaza, the West Bank and East Jerusalem alongside Israel, Hamas says it will never recognize the Jewish state.

"I'm guardedly optimistic," Aziz Dweik, the Hamas speaker of the long-defunct Palestinian parliament, told Reuters at the funeral. "But the gap between the two sides remains wide, and their agendas remain different."

Hamas has long accused Fatah of having a hand in the deaths of the two brothers, Adel and Imad Awadullah, buried on Wednesday - something Fatah denies.

Relatives say Imad was in a Fatah-run Palestinian jail while his brother was in hiding from Israeli forces. They say he was allowed to escape in order to lead them to Adel, and the two were killed in a shootout with Israeli forces.

Uniformed and plainclothes Palestinian forces kept a close eye on the marchers, some of them wearing masks, as chants rang out of "Revenge!" and "Strike Tel Aviv!" - Israel's coastal commercial hub.

Fatah supporters passed out leaflets among the crowd, cautioning, "Let there not be any excuse to divide members of the united Palestinian family. We live now in an atmosphere of reconciliation."