'Both parties still indicate that they feel it's important to negotiate and want to find a way to negotiate,' secretary of state says.

ADDIS ABABA - US Secretary of State John Kerry said on Thursday he would pause and reassess what might be possible after failing to meet his April 29 goal for an Israeli-Palestinian peace deal, saying both sides still wanted to try to negotiate.

In his first public comments since the deadline passed, Kerry appeared to push back against descriptions of his talks as fruitless, saying important progress was made during the nine-month effort.

"Both parties still indicate that they feel it's important to negotiate and want to find a way to negotiate," Kerry said during a trip to Ethiopia.

"So we believe the best thing to do right now is pause, take a hard look at these things and find out what is possible and what is not possible in the days ahead."

The failure to reach a deal has given more ammunition to critics of US President Barack Obama's foreign policy, who also accuse him of not reacting forcefully enough to Russia's annexation of Ukraine's Crimean peninsula. 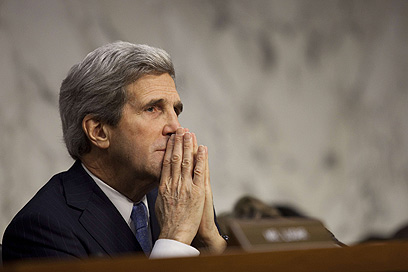 But Kerry, who has invested much of his own time and clout in the Israeli-Palestinian peace effort, strongly suggested he was not about to walk away.

"I personally remain convinced that as each (side) sort of works through the reasons that things began to become more difficult in the final hours, there may be quiet ways within which to begin to work on next steps," Kerry said.

Israel suspended the talks a week ago, even before the deadline passed, in response to a reconciliation pact between Fatah, the Palestinian faction that leads the West Bank, and Hamas, which rules the Gaza Strip and which the United States and Israel regard as a terrorist group.

But before that, Kerry said, "both leaders took serious steps in order to engage in this discussion."

"What has not been laid out publicly and what I will do at some appropriate moment of time is make clear to everybody the progress that was made," Kerry said.

"These eight months - eight months plus - were not without significant progress in certain areas. And I don't think anybody wants to lose that progress."

When Kerry might revisit the peace effort was unclear.

"It's time for a pause. But it's also time to be reflective about the ways in which one might be able to find common ground even out of these difficulties," Kerry said.