Netanyahu: We owe our existence to fallen heroes

Prime minister praises the 23,169 men and women who gave their lives to protect the State of Israel at the opening ceremony for Memorial Day. IDF Chief Gantz: Today we remember those who gave everything for Israel.

Prime Minister Benjamin Netanyahu praised Sunday the men and women who sacrificed their lives for the State of Israel at the opening ceremony of this year's Memorial Day held in Yad Labanim compound in Jerusalem.

"The fallen of Israel's wars are our national heroes. We would not be here today if not for their willingness to lay down their lives so we could be here. Never, not even for a moment, do we forget we are here thanks to them," Netanyahu said. Speaking of his brother Yonatan, the sole casualty of Operation Entebbe, Netanyahu said "it is hard, almost impossible to explain to someone who has not experienced it what sorrow overtook us, the shock that shook us, the feeling of loss that filled us." 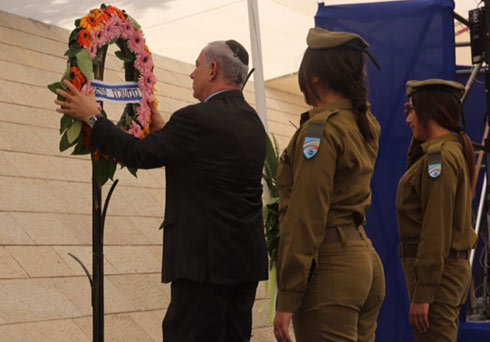 Knesset Speaker Yuli Edelstein also addressed the bereaved families at the ceremony. He said that he "carries with him the pain of silence. No one should remind you how to remember, because you can never forget. Memorial Day is the tombstone of an entire nation, a nation which bows its head in honor of what they (the fallen) have scarificed."

IDF Chief of Staff Lt.-Gen. Benny Gantz published a statement at the beginning of Memorial Day, which was distributed to the entire army.

"In this hour, while we come together at the cemeteries and monuments for ceremonies and memorials, we remember those who gave the country everything there is to give," Gantz wrote.

"The fallen soldiers and those killed by terror activities walk with us in their absence in every step we take. On this day, the siren will cut through the silence, and the citizens of Israel will bow their head and in their mind's eye they will see a figure in uniform: An IDF soldier. The names we remember today create the character of the IDF, the people' s army, to which we enlisted to serve the State of Israel."

Over the next 24 hours, officials will attend traditional ceremonies and the country will observe moments of silence led by wailing of sirens.

At precisely 8 pm on Sunday, sirens will wail throughout the nation of Israel marking Memorial Day, when the country pauses to remember the 23,169 soldiers and security personnel who gave their lives protecting their country.

As the sirens wail, the country will effectively stop for a full minute of silence. Vehicles will pull-over and work will also stop as the entire country will stand in silence for the duration of the siren.

Events honoring Memorial Day will begin four hours before the sirens with the traditional ceremonies at Yad LeBanim in Jerusalem at 4pm. The Prime Minister will attend this event as well as the Speaker of the Knesset and Israel's chief Rabbis.

At the end of sirens in the evening, President Shimon Peres will be joined by Chief of Staff Benny Gantz at the Kotel to light the traditional memorial candle. A special event will be held at the central Synagogue Chen HaTzafon in Petah Tikvah in association with Or Avraham Ohavi. Major General of the Southern Command Sami Turgeman will take part in the ceremony along with a former Shayetet 13 commander and traditional attendees. Two minutes of silence will be observed Monday morning along with more sirens throughout the country at 11am followed by ceremonies at military cemeteries expected to be attended by hundreds of thousands.

The memorial service to be held at Mount Herzl will be attended by Harriet Levin, mother of first-sergeant Michael Levin, an American who was fatally wounded in the Second Lebanon War.