In a majority of 2:18 the government authorized the Israel Broadcasting Authority reform led by Communication Minister Gilad Erdan.

The government has approved a reform led by Communication Minister Gilad Erdan which will see the annual toll levied for Israel's Broadcasting Authority cancelled by March 2015. The vote passed Sunday, at the cabinet meeting, with 18 supporters and only two ministers – Yisrael Katz and Amir Peretz opposing. Prime Minister Benjamin Netanyahu described the Broadcasting Authority reform as "vital"; however, he explained that this reform is not without issues.

Netanyahu said to Erdan: "I appreciate the fact that this reform is led by you, but this is not its final version and it will probably undergo various changes during the legislation phase. Nonetheless, the direction is clear and I believe that so is the outcome. We want a strong and efficient public broadcast – a change which is a long time coming.

"We are finally here to realize the reform whose cruz is that the citizens of Israel will stop paying a NIS 300 television tax per year, which we hoped will be annulled later this year.

"The public broadcast will undergo significant changes that will reinforce it dramatically. The authority's efficient employees, and there are many, will continue to work in the new broadcast authority and those who would choose to retire will receive adequate and reasonable severance packages," said Netanyahu. 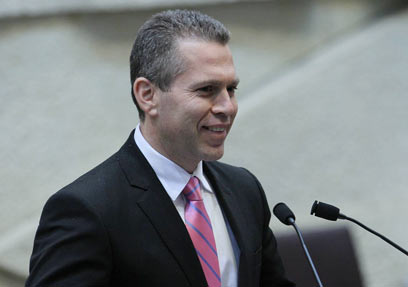 Communication Minister Gilad Erdan (Photo: Gil Yochanan)
Erdan said that "the reform to save the public broadcast is underway; the move will lead to the cancellation of the TV tax and will make the public broadcast relevant again with the foundation of three new TV channels." The bill stipulated that the Broadcast Authority will be shut down only after the new public service will begin its activity. "The Israeli people deserve a better public broadcast and we are on our way to achieve that goal. I am thankful to Prime Minister Benjamin Netanyahu and the ministers for their support," added Erdan. Finance Minister Yair Lapid said "I support the public broadcast because it's an important and worthy cause. The Broadcast Authority has become a governmental authority without demand for what it produces. Another important aspect is the detachment of politicization. Governments change, but a broadcast authority should remain neutral."

During the cabinet meeting a confrontation developed between the Economy Minister Naftali Bennett and Environmental Protection Minister Amir Peretz. "Keep defending the unions instead of the millions we all pay. There are no labor party members here, so save me this speech," said Bennett to Peretz, a former union leader.

Peretz explained that he voted against the reform because "as part of the reform the top executives' failures fall on the shoulders of the workers, thus cancelling agreements that were already signed with them. This is a violation of those agreements and abandoning a large public of workers who is not responsible for the management's failures." "I support the cancellation of the TV fee, but not the cancellation of the convalescence program. The proposed bill authorized today didn't include any commitment regarding the fate of 1,900 workers," added Peretz.