If women pass exams which for decades have only been available to men, they will be able to work as kashrut supervisors on behalf of local rabbinate offices across Israel.

For the first time since the establishment of Israel's Chief Rabbinate, women were permitted Wednesday to take ordination exams which for the past few decades have only been available to men. If these nine women pass the tests, they will be able to work as kashrut supervisors on behalf of local rabbinate offices across Israel.
Women in Judaism
Opposition to female participation culture-based, not halachic
Rabbi Levi Brackman
The concern among many Orthodox Jews regarding women's role has less to do with adherence to Jewish law, and more to do with the fear of changes impacting the religious community's nature.
Opposition to female participation culture-based, not halachic

This breakthrough was made possible thanks to a High Court petition filed by Emunah, a national religious women's organization, demanding that the Rabbinate recognize the movement's kashrut supervision course and allow its graduates to take the ordination exams.

After Ashkenazi Chief Rabbi David Lau took office last year, he was asked by the court to voice his opinion on the issue, as the person responsible for the Rabbinate's kashrut department. He responded that there was no halachic barrier preventing the women from taking the test. 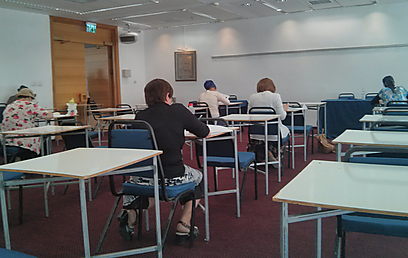 Women take ordination exam (Photo: Chief Rabbinate)
As a result, the Chief Rabbinate Council decided recently to change the criteria for taking the test (such as yeshiva studies), thereby removing the obstacles facing women who sought to be recognized as kashrut supervisors.

Last month, after the change took effect and was even expressed in a memo sent out by the Religious Services Ministry's director-general, the High Court declared that the petition had become redundant and would be erased.

On Wednesday morning, nine women exercised their right for the first time and took the ordination exams. "There is no doubt that our achievement carries a historical meaning," said Emunah Chairwoman Liora Minka. "We opened a window, and through it thousands of observant women will find respectable and important employment in the coming years. This was a required move, and it's a shame that we had to wage a public and legal battle in order to reach this very natural and obvious outcome." About three months ago, women studying Torah demanded that the Chief Rabbinate let them take its ordination exams in order to allow them to prove their proficiency in Jewish law and fill different roles.

The women appealed to Rabbi David Lau, arguing that by only permitting men to take the exams, the Rabbinate was discriminating against women. They stressed that all they were asking for was the right to take the exams, and not to be ordained as rabbis, but their request was denied.