Defense officials prepare for crunch as crisis in military spending means government could be, 'forced to stop the army'.

Chief of Staff Benny Gantz is being careful of voicing the facts publicly, but Defense Minister Moshe Ya'alon has stepped up to the plate and told the truth of reality for him.

"The money is gone. The defense apparatus is in crisis, and we need to loosen up the defense budget now," Ya'alon said.

Military officials have been debating whether or not to go to the media to address the problem. Their fear was not only public confrontation in front of the political leadership, but primarily the possible harm to the IDF's deterrence capability.

There were some who put the pressure on Gantz in the hope that he wouldn't come to his senses too late, just like when the career officers were laid off or when Israelis demanded that he implement the Haredi draft law.

Gantz would rather hold these discussions behind closed doors and approval rating show that he may have gained a few points with the public, but the army lost. 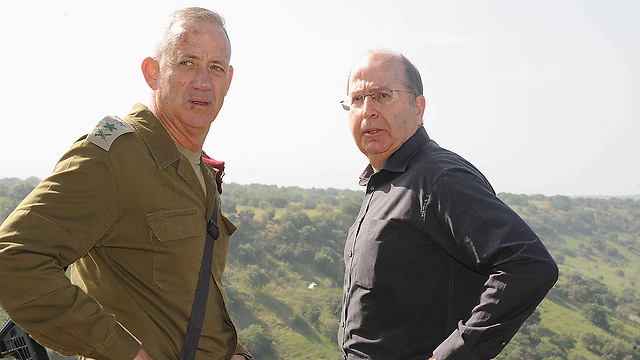 Ya'alon and Gantz face an extreme budget crisis (Photo: Avihu Shapira)
Until a few years ago, the IDF had a four year defense budget plan, but during his tenure Gantz hasn't managed to approve even one, while the organization that is supposed to be capable of looking a whole decade ahead has been forced to work one year at a time. That isn't the end of the farce. In the last year NIS 4.5 billion was cut from the budget and the IDF set a new record: they created a 6-month plan and in the middle of the year were forced to plan the next. To his credit, Gantz said that he warned of the deceptive peace while Hezbollah and other factions in Gaza armed themselves. The gloomy situation can be felt very clearly in the field. The Paratrooper Division for example, finished a seven-month-long operational deployment just two weeks ago. They will soon be headed off to a training exercise that will last just a few months before they go to the West Bank for nine months. In a normal situation a battalion trains for four months after four months of operational service, and that's for a division that's supposed to be sent to the most important arenas. If this reminds some people of the situation before the summer of 2006, they wouldn't be wrong. "We're not trying to scare people," said Brigadier General Agay Yechezkel and commander of the division in charge of the military plans at a committee meeting. "We will be forced to stop the army." Ya'alon added criticism for the managers of the defense budget. "From this month on we've entered a difficult period. A lot of harm has been done to training and we're going to decrease in our level of readiness." "The discussion over the defense budget is managed like a Turkish bazaar. Also, we do we have to pay a nonsensical tax on fuel for tanks and planes when public transportation is exempt from it?" said Ya'alon. Treasury officials responded quickly saying that the defense bureaucracy is once again choosing the easy road instead of cutting back of excess military spending and bloated pensions. In response to Ya'alon's remarks about a "Turkish bazaar", they asked to remind the defense minister that just a few months ago three billion shekels were added to the defense budget.

The best proof the situation could be seen through the separation of commander of the West Bank, Brigadier General Tamir Yadai from reservists who came for operational deployment.

"Remember my face well," he said, "because you won't be seeing me next year and not even the year after that." Anyone still in the reserves knows that this isn't just a spin. The IDF is in crisis.