Far-right activists had tried to block access to outpost, the first of three tapped for demolition; IDF bracing for 'price tag' attacks in retaliation.

Security forces completed Wednesday the evacuation and demolition of eight illegal structures at Maale Rehavam in Gush Etzion, the first of three tapped for evacuation in the near future, encountering a small amount opposition.

The operation is the army's largest settlement evacuation in recent years, and follows a High Court of Justice ruling that the outposts had been erected on Palestinian-owned land. Five people were arrested.

A few far-right activists and Ma'aleh Rehavam residents had climbed onto the roofs of several structures tapped for demolition, shouting: "This is our home." They were removed and the demolition went ahead using tractors and engineering equipment. IDF troops leading the operation were also backed up by Border Police officers.

The security forces demolished seven structures, including four that were inhabited. Dozens of far-right activists had arrived at the site in the early hours of Wednesday morning, in order to block the access road to the outpost with tires, barbed wire and rocks. 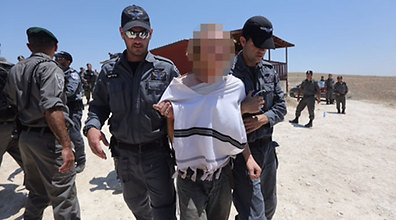 The evacuation Wednesday was delayed for approximately one hour to allow the settlers a last-ditch appeal to the courts. The residents of the outpost had presented the court with documentation showing ownership of the land, but a local settler leader Davidi Pearl said that the court had rejected their bid to halt the evacuation.

"Every evacuation of homes is an expression of weakness and lessens our hold on the State of Israel," said Pearl. "But we will not flinch and we will not be silenced, and we will keep building and expanding our roots in Gush Etzion and everywhere else." 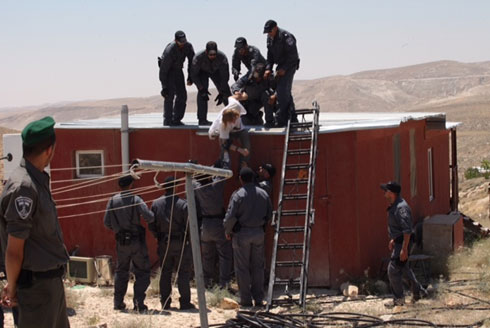 Senior officials in the Defense Ministry, including Defense Minister Moshe Ya'alon, had been in regular contact with settler representatives from Samaria, Gush Etzion, and Binyamin in an attempt to convince them to voluntarily vacate 28 illegal structures, 16 of which were inhabited. Discussions had been ongoing for six months after the High Court ordered the state to evacuate structures built on private Palestinian land.

While most of the settler outposts addressed the court order, either by patching up the structures or vacating them, the three outposts tapped for demolition refused to comply.

The deadline for vacating the structures, which include a synagogue and a mikveh, is May 18. As the IDF does not evacuate settlers on Friday or Saturday, the operation was expected to be completed by Thursday night, although there were concerns that the settlers may use violent resistance to the move.

Hundreds of soldiers, police officers, Border Guard personnel, and representatives of the Coordinator for Government Activities in the Territories (COGAT) have been preparing for the operation. They were to secure court orders declaring the surrounding area a closed military zone, and place blockades and roadblocks near the outposts.

The defense establishment was bracing for a wave of "price tag" attacks against IDF personnel and Palestinians in the wake of the operation. The evacuation also raised concerns of reprisal attacks before, during, and after the operation.

There were further fears that right-wing extremists would attempt to vandalize and destroy Christian institutions in revenge, causing embarrassment for Israel in run-up to the arrival of Pope Francis.

"For six months, the settler representatives wasted the opportunity to arrive at an agreeable evacuation, choosing instead to show contempt for the law despite the defense establishment's many attempts to come to an arrangement," said a government source.

"Since some of the outposts reached a positive arrangement in which their structures were certified as legal, there is no reason we cannot reach an agreement on the evacuation before the final hour."