Netanyahu not surprised by UN report on Iran's activities

Prime Minister Benjamin Netanyahu said on Friday that Israel was not surprised by a confidential UN report on the Iranian ballistic missile program, before a meeting with US Secretary of Defense Chuck Hagel for talks on Iran.

The report claimed that despite a reduction illicit purchases that breach UN sanctions, Iran's development of ballistic missiles posed an acute challenge to six powers negotiating with Tehran to rein in its nuclear program.

At a press conference before the meeting with Hagel, Netanyahu stressed that the Islamic republic was deceiving the international community. 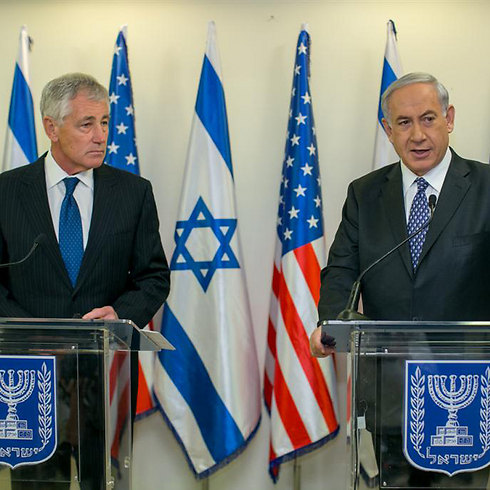 "I believe that while the talks with Iran are on-going, one thought must guide the international community: The Ayatollahs must not be allowed to win.

"We cannot allow Iran, leading sponsor of terrorism in these times, to develop the capability to manufacture nuclear weapons," he said.

Netanyahu also raised the failed US-led talks between Israel and the Palestinians, citing incitement and anti-Zionist propaganda as a major detriment to the success of any negotiations. But the prime minister reserved much of the blame on Palestinian President Mahmoud Abbas' decision to seek a unity government with Hamas.

"Our Palestinian partners are advancing their unity agreement with Hamas, which the US has rightfully designated as a terrorist organization.

"It is clear the Palestinians cannot have a pact with Hamas and peace with Israel," he said.

During his remarks before the meeting, Secretary Hagel emphasized that "American support for Israel is at an all-time high" and that "America's commitment to Israel's security is resolute."

Hagel also reiterated President Barack Obama's "continued commitment to ensuring that Iran does not get a nuclear weapon."