Significant Israeli investment in India is only going to grow under leadership of newly-elected prime minister Narendra Modi, who boasts long-time support of Israel.

Israel may have a staunch new ally in South Asia with India's election of Narendra Modi to the position of Prime Minister, reported the New York-based International Business Times on Saturday.

Prime Minister Benjamin Netanyahu wasted no time on Friday, calling Modi to congratulate him for his victory. In their phone conversation, the two had agreed to work to deepen cooperation between the two countries.

Modi is a Hindu nationalist and considered to be right-wing in Indian politics. Born into a poor family where he sold tea with his father as a child, he rose to prominence as the Chief Minister of Gujarat, a Western province in India.

There he gained recognition as a charismatic leader as he reversed economic trends in the province to make it one of India's most important Industrial and financial centers.

Part of his success was due to a public relations campaign and financial incentives to encourage investment in development within Gujarat. Israel was reportedly one of Modi's greatest allies in economic progress according to the International Business Times. He has visited Israel in the past and has publicly supported it.

Modi came to power as leader of the Bharatiya Janata Party (BJP) which has supported his close political and financial ties with Israel, who invested billions of dollars in Gujarat during Modi's time as its leader. 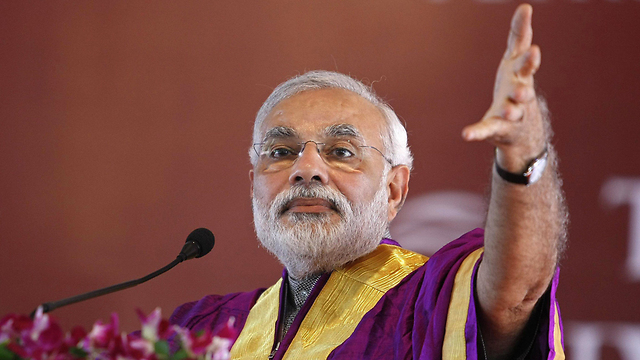 Modi During the his campaign in India (Photo: Reuters)
In the latter half of 2013, agreements were signed with Israeli company Tower Semiconductor and a Swiss company to open two semiconductor fabrication plants (one of which would be in Gujarat) at a cost of $10.4 billion. The two plants are projected to create 22,000 jobs. Indian consumption of the semiconductor products for electronic chips to be made at the plants is due to rise from $7 billion in 2014 to $55 billion in 2020, paving the way for investment in additional plants. "Gujarat is a business-oriented state and this (memorandum of understanding) will help both Israeli and Gujarat-based companies in developing and strengthening the industrial relationship," said Israel's Consul General in Mumbai, Jonathan Miller, to Israel National News. "Our focus is on increasing research ties with Gujarat. Israel is keen to increase research and development and cultural ties with Gujarat," said Miller who also added that a free-trade agreement may be on the horizon for the two countries. Miller also spoke on Indian TV to discuss Israeli involvement in agricultural projects. "Israel is a world leader in advanced agriculture technologies. Israel's success lies in the determination and ingenuity of farmers and scientists and in the close cooperation between R&D and industry," said Miller. "These characteristics have created a flourishing agriculture sector amidst a difficult environment with limited ground and water resources. Amongst the many fields in which Israel and India collaborate, agriculture has always been front and center," he concluded. Though popular throughout much of the nation for his charisma and economic success, Modi is a highly controversial political figure since riots in 2002 in Gujarat when 1,200 people were killed in violence between Hindus and Muslims.

Modi was accused of complicity in the violence and though he was absolved of all accusations by India's Supreme Court, the US and European countries rejected visas for Modi in sanctions meant to punish the leader for not doing enough to end the violence.

Israel gained Modi as a business partner and political supporter when he saw that attempting to find financial investment from the US and Europe wasn't politically viable.

Yet, it isn't only for financial gain that Israel finds itself naturally partnered with Modi's BJP. Anti-Pakistan and anti-Islamic rhetoric from BJP officials over the years has drawn India closer to Israel politically and ideologically as they also search for ways to cooperate in fighting terrorism.

The National security adviser from a previous BJP government said in Washington that India, Israel, and the US must, "jointly face the same ugly face of modern-day terrorism." The comments came in the wake of the September 11 terrorist attacks in New York City and preceded the first state visit from an Israeli Prime Minister to India.

While any positive relationship between the two countries creates a complicated situation between the Indian State and the Islamic world, financial cooperation has been significant no matter who was in power. Israel is India's largest provider of military equipment for example, amounting to $10 billion.