Residents of Dheisheh refugee camp, near Bethlehem, complaining of having 'no real life, no space, no jobs, no services, no economy', cast hopes that Pope's visit on Sunday will call attention to struggles.

DHEISHEH REFUGEE CAMP, West Bank – Pope Francis will spend less than half an hour in this Palestinian refugee camp during a jam-packed Holy Land tour this weekend, but residents hope even a brief visit will shine a light on what they say is their forgotten plight.

Some 190,000 of the West Bank's 2.4 million Palestinians live in refugee camps and face tougher conditions – including higher unemployment and overcrowding – than their neighbors in towns and villages.

Many feel increasingly neglected by the Palestinian self-rule government and the United Nations agency responsible for their welfare. Resentment can be seen in the rise in stone-throwing protests by camp youths and a recent two-month strike of thousands of local employees of the UN aid agency demanding higher wages.

Underlying the discontent is fear of open-ended limbo. Israelis and Palestinians remain far apart on a solution for the refugees who were forced or driven out in the war over Israel's 1948 creation and today, along with their descendants, make up more than 5 million people scattered across the West Bank, Gaza, Jordan, Syria and Lebanon.

Last month, another round of Israeli-Palestinian peace talks ended in failure. "Through time, the suffering in the camps has grown," said Ishaq al-Natteti, 66, who was only a few days old when his family was uprooted from what is now Israel and has spent his life in Dheisheh, a camp of 13,000 people near Bethlehem. "There no return to our homes and land, no real life, no space, no jobs, no services, no economy." The pope will visit a Dheisheh community center for about 20 minutes on Sunday and will meet dozens of children from three camps.

Francis said Wednesday that his visit to Jordan, Israel and the West Bank is "strictly religious," tempering expectations that he might take sides in the Mideast conflict. Israelis and Palestinians have being trying to harness the pilgrimage to highlight rival narratives. 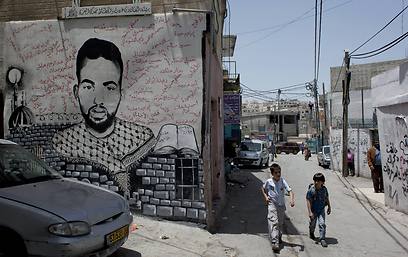 Dheisheh refugee camp (Photo: AP)
Some argued that Christianity cannot ignore one of the world's most entrenched refugee problems. "Truly, the Palestinian refugees are the dispossessed of the earth, a people languishing in exile," said Chris Gunness of the UN Relief and Works Agency for Palestinian refugees. "There cannot be peace in the Holy Land until they are delivered from their dispossession and exile". The pontiff will meet the refugee children at Dheisheh's Phoenix Center, which hosts workshops and weddings and also offers a library and a computer center. A meeting hall has been decorated with large posters illustrating Dheisheh's history, including dusty streets with donkey carts in the 1950s and a tall chain-link fence that blocked off the camp in the 1980s to prevent stone-throwers from striking Israeli cars. "The children will tell the pope about the tough reality they have grown up in in the camp and their dreams of returning to the villages and cities of their families in Israel," said Ahed Eid, manager of the center.

In Palestinian public discourse, a large-scale return is seen as the main goal. Israel vehemently objects, saying this would dilute its Jewish majority. Palestinian leaders say each refugee has the right to choose where to live, including in a future Palestinian state. The Palestinians want to set up such a state in the West Bank, Gaza and east Jerusalem, lands Israel captured in the 1967 war. 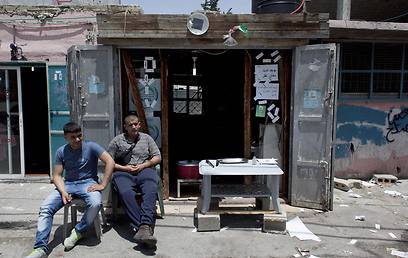 Dheisheh refugee camp (Photo: AP)
Restive refugees with little to lose have been at the forefront of confrontations with Israeli forces since the first uprising against Israeli occupation in the 1980s. Teens routinely throw stones at Israeli troops or at cars with Israeli license plates passing near the camps, though during an armed uprising that started in 2000 some also resorted to guns and bombs. Israeli forces respond with tear gas, rubber-coated steel pellets – and at times live fire. Violence dropped in recent years, though UNRWA said this week that there has been a sharp rise in the number of Palestinian refugees killed and wounded by Israeli troops, attributing this to an increase in the use of force by Israel. Seventeen refugees were killed and 486 injured in 2013, compared to no deaths and 38 injuries in 2012, the agency said, adding that the upward trend continued into 2014. But the resentment in the camps isn't just directed at Israel. Some say they feel looked down upon by their better-off urban neighbors and ignored by the self-rule government of Palestinian President Mahmoud Abbas. Others complain about a cutback in services by UNRWA, which has run schools, clinics and food centers in 58 camps across the region since 1950.

Faced with a growing budget deficit and Syria's civil war, the agency has, among other things, eliminated free meals in schools. UNRWA says it has protected its core services in health, education and relief. 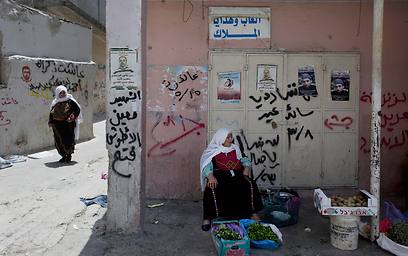 Dheisheh refugee camp (Photo: AP)
One of the biggest problems in the camps is unemployment, which exceeds the overall figure of 26 percent for the West Bank and Gaza. In Dheisheh, young men loiter all day in alleys, the walls decorated with graffiti tributes to those killed by Israel. Tariq Afandi, 33, said he worked as a laborer in Israel for several years, but was later denied an entry permit. Such permits are often revoked at times of Israeli-Palestinian tensions. Afandi hasn't worked in more than a year and blames it in part on what he said is rampant nepotism in Palestinian society. "The jobs are for the Palestinian Authority officials and their families," he said. "Their sons and daughters get the government jobs. They leave us jobless. People are ... willing to explode at any moment." He shrugged off the pope visit, saying he believes ordinary people won't have access. "The officials who are in good positions, who have jobs and money are the ones to talk to the Pope, not us the poor people who are deprived of everything," he said.