Almost 70 years after Nazi Germany crumbled, a radical right-wing party that critics say shows an affinity for Hitler's National Socialist movement looks set to enter the European Parliament for the first time due to a change in electoral law.

The National Democratic Party (NPD), described by German intelligence as "racist, anti-Semitic and revisionist", has put stopping mass immigration at the core of its election program for this week's vote.

Abolition of a German law allowing only parties with three percent of the vote to claim seats will almost certainly open the door to the NPD, which has been campaigning under slogans including "Money for granny instead of Sinti and Roma" and "the boat is full".

Roma and Sinti were targeted by the Nazis and many died in concentration camps. The NPD says immigrants from Romania and Bulgaria are coming to Germany to use its social services.

"We say Europe is the continent of white people and it should remain that way," Udo Voigt, the lead candidate for the NPD, told Reuters in a rare interview.

"We want to make sure that even in 50 years' time an Italian, a Frenchman, an Englishman, an Irishman and a German are still recognisable as European and cannot be mistaken for Ghanaians or Chinese," the 62-year-old said in an office adorned with the German and party flags at NPD headquarters in Berlin.

Voigt denies such views amount to racism and says his party rests on a democratic foundation. 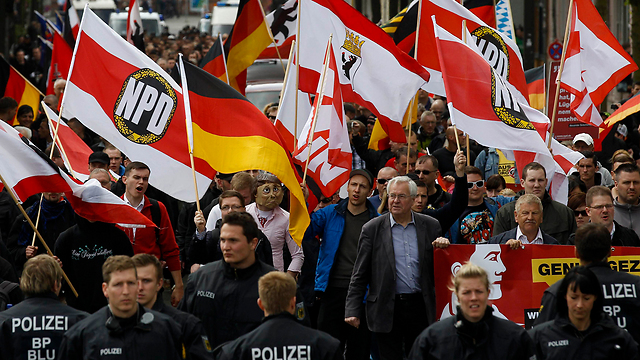 Last year Germany's 16 states launched a bid to ban the NPD for its "degrading racism" and "recognizable affinity" for the Nazis. A similar attempt by the federal government failed in 2003.

The NPD is not represented in the federal parliament but has cleared the national five percent threshold to win seats in two state assemblies and Voigt says it has about 400 representatives in local councils. But its radical views mean it will likely struggle to find partners at a European level.

Political scientist Hajo Funke, an expert on the far right, said the NPD copied many ideas from National Socialism; but while the Nazis said in their early years they wanted to expel the Jews from Germany, the NPD sought expulsion of Turks, Muslims and immigrants in general.

"In their programme of sending back the around 12 million people in Germany that they don't see as racially pure, they are more radical than Hitler's NSDAP party was at its founding congress in 1920," he said.

The NPD, founded in 1964, is campaigning to get rid of Europe's passport-free Schengen zone, stop the free movement of workers, abolish the euro and transform the EU into a "united Europe of Fatherlands" of independent sovereign states.

"I'll throw a spanner in the works by foiling plans to create a multicultural society in Europe and thwarting billions of spending on bank bailouts rather than on unemployed people in Europe and we want to talk about renegotiating the Schengen agreement," Voigt said.

A Catholic who enjoys sailing and skiing, Voigt trained as an aerospace metalworker before joining the army. Prevented from becoming an officer by his NPD membership, he studied politics and became a teacher at an NPD training centre in Italy.

He had joined the party in 1968 after attending an NPD event where, for the first time, he said, he heard a politician express pride in German history. When leftists tried to cut cables and knock over the loudspeakers, a fight broke out.

Martin Schulz, the centre-left's candidate, has called on Europeans to use their votes to prevent the NPD getting in.

"Seventy-five years after the start of World War Two, we Germans are running the risk that proponents of Adolf Hitler's ideology could win a seat in the next European Parliament."

Manfred Guellner, head of the Forsa polling institute, said around 11 percent of the German electorate could be potential voters for the extreme right, though he believed not much more than 1 percent would actually vote for the NPD.

The traditionally low turnout for European elections – in 2009 it was 43 percent – favours radical parties like the NPD whose supporters are more likely to go and cast their ballots.

Voigt said the NPD could win between 1 and 3 seats.

But the party is so far to the right it may have trouble finding partners in the assembly, especially because of moves to have it banned and sensitivities about Germany's Nazi past.

"Even Jobbik (in Hungary) has avoided working with the NPD where at all possible because it always looks bad for parties if they work with the NPD," Lazaros Miliopoulos, a political scientist at the University of Bonn, said.

Voigt, who has been given a prison sentence subject to appeal for incitement, says the NPD would like to work with like-minded nationalists in Jobbik, Greece's Golden Dawn, the British National Party and Bulgaria's Attack.

But he acknowledged that the Dutch right-wing populist Party for Freedom (PVV), France's National Front, the UK Independence Party (UKIP) and Alternative for Germany (AfD), which may steal some NPD votes, were unlikely to work with the more radical NPD.

Analysts say a breakthrough into the Euroepan parliament would conceal the party's weaknesses, such as its financial problems, infighting and the likelihood that it could fall out of the state assembly in Saxony after a September vote.

"Their likely entry into the European Parliament belies the fact the NPD is actually very weak at the moment," Miliopoulos said. "Though they will get in, they haven't gained in support and are actually losing voters if anything."