"slander and lies against the State of Israel continue to be heard on European"
Photo: AP

With three dead, one in custody, and another hanging between life and death after shooter opens fire in Brussels Jewish museum, prime minister and foreign minister slam attack as result of 'anti-Israeli incitement.'

Prime Minister Benjamin Netanyahu commented on the shooting at Brussels Jewish Museum Saturday which left three people dead, saying it was the result of "of endless incitement against Jews and their state." Similar claims were made by Foreign Minister Avigdor Lieberman.

Two women and a man were killed and one person seriously injured during a shooting at the Jewish Museum in central Brussels on Saturday, with Belgian officials saying anti-Semitic motives could not be ruled out.

Netanyahu said "slander and lies against the State of Israel continue to be heard on European soil even as the crimes against humanity and acts of murder being perpetrated in our region are systematically ignored. Our response to this hypocrisy is to constantly state the truth, continue a relentless fight against terrorism and build up our strength." 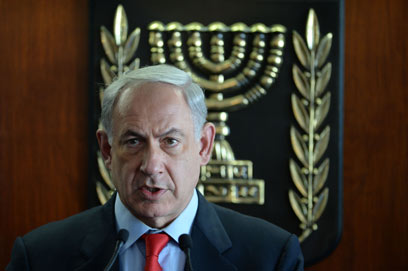 Foreign Minister Avigdor Lieberman slammed what was assumed to be an anti-Semitic attack, saying that "this act of terror is the result of anti-Israeli incitement. 'Pro-Palestinian' activities which like in darker times call to boycott 'Jewish products' are anti-Semitic activities, and nothing more."

Lieberman further noted that "the recent events are a massive reminded for all those cooperating with this incitement and comparing construction to murderous terror activity." The latter comment seemed to allude to criticism of Israel's West Bank settlement construction.

A spokeswoman for Brussels prosecutors office said there was no clear information about the perpetrator, although a fire brigade official said earlier that the shooter had driven up to the museum, gone inside and fired shots. 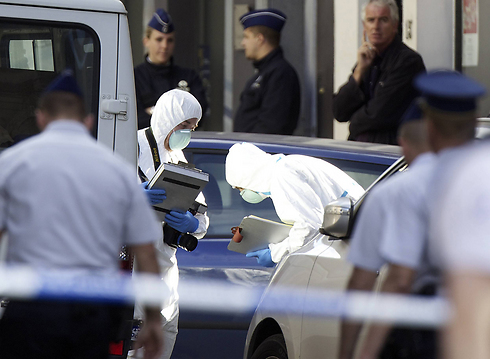 Security forces outside the Jewish Museum in Brussels after the deadly attack (Photo: AFP)

"Regarding the motive, we have little information. Everything is possible," Ine Van Wymersch told a news conference.

"We know that the location, the Jewish Museum in Brussels, makes one think of it being an anti-Semitic attack, but we do not have enough to confirm this is the case."

Belgium's interior minister, Joelle Milquet, was quoted by the RTBF Belgian television station, saying: "It's a shooting ... at the Jewish Museum ... All of this can lead to suspicions of an act of anti-Semitism."

Police cordoned off the area around the museum in central Brussels, a busy tourist district packed with cafes, restaurants and antique furniture shops. An annual outdoor jazz concert due to be held in a popular square near the museum was called off.

A man seen by witnesses driving away from the scene was questioned in connection with the shooting, but officials were not certain if there had been one or more perpetrators, or whether the man had been involved.

"The link between this person and the incident is not clear. The person does admit being present," Van Wymersch said.

No information was released about the nationality of the victims or whether they were tourists or museum staff. They had been shot in the face and neck, and the injured person's condition was life-threatening, the spokeswoman said.

Officials said earlier the victims were two men and one woman.

Security around all Jewish institutions in the country has been raised to the highest level, and Prime Minister Elio Di Rupo met with police and senior officials to discuss the situation.

About half of Belgium's 42,000-strong Jewish community lives in Brussels.

Jewish community officials drew parallels between the shooting and the 2012 killing of four Jews in a school in France by an al Qaeda-inspired gunman, Mohamed Merah.

"This really reminds of what you experienced in France with Mr. Merah attacking a Jewish school," Maurice Sosnowski, president of the Coordinating Committee of Belgian Jewish Organizations, was quoted saying by BFM TV.

"This is appalling. I would never have imagined something like that happening in Brussels."

He said no threats have been issued to the Jewish community.

"Two years after Toulouse...this despicable attack is yet another terrible reminder of the kind of threats Europe's Jews are currently facing."

On Sunday, Belgium holds a general election and throughout Europe, voters will choose the next European Parliament.

Foreign Minister Didier Reynders, who was in the area at the time of the shooting, said witnesses had told him the suspected shooter was carrying bags when he entered the museum.

"I was in the neighbourhood. I saw two people on the ground and with other people, we called the emergency services," he told French BFM TV.

"Witnesses told me that the suspected shooter was carrying bags when he entered the museum so it was urgent for the police to check that nothing had been left inside the museum."