Vatican leader arrives in Bethlehem calls on both sides to make sacrificies needed for two-state solution.

Francis said: "The time has come to put an end to this situation which has become increasingly unacceptable." He said both sides needed to make sacrifices to create two states, with internationally recognized borders, for the good of their own people. 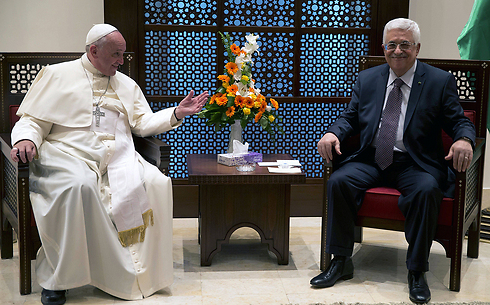 In his remarks, Abbas voiced his concerns about the recent breakdown in US-backed peace efforts and lamented the difficult conditions facing the Palestinians. He also expressed hope for peace.

"Your visit is loaded with symbolic meaning as a defender of the poor and the marginalized," he said.

Abbas listed a series of complaints against Israel, including continued settlement construction, the plight of thousands of Palestinian prisoners, Israel's control of east Jerusalem, the Palestinians' would-be capital and Israel's construction of the "ugly wall" that encircles Bethlehem.

"We welcome any initiative from you to make peace a reality in the Holy Land," Abbas said. "I am addressing our neighbors - the Israelis. We are looking for the same thing that you are looking for, which is safety, security and stability." 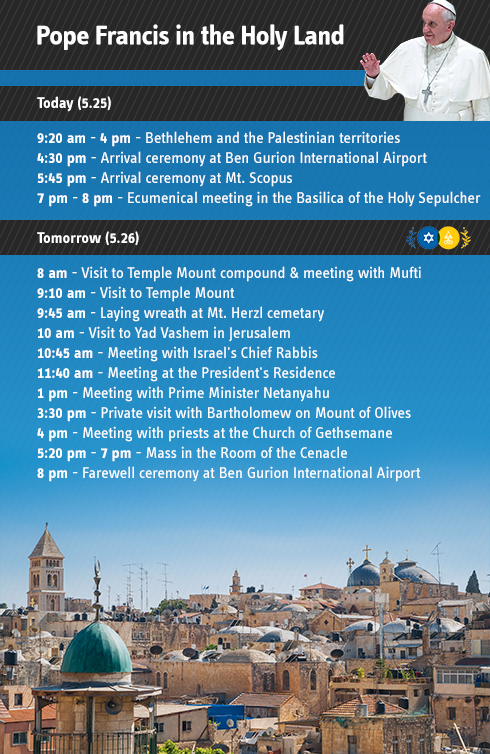 Bethlehem is surrounded on three sides by Israel's separation barrier. Israel says the barrier is a necessary security measure. But the Palestinians say it has engulfed land across the West Bank and stifled life in Bethlehem. After meeting Abbas, Francis' stepped out of his open-air vehicle to inspect the massive concrete structure.

Francis spent a few minutes at the wall, surrounded by Palestinians waving Vatican flags and taking pictures with their cell-phones, and then boarded his open-topped car the rest of the ride to Manger Square.

At the Mass in Manger Square, Pope Francis invited the Israeli and Palestinian presidents to come to the Vatican to pray for peace a month after US-backed talks aimed at ending the Middle East conflict collapsed. 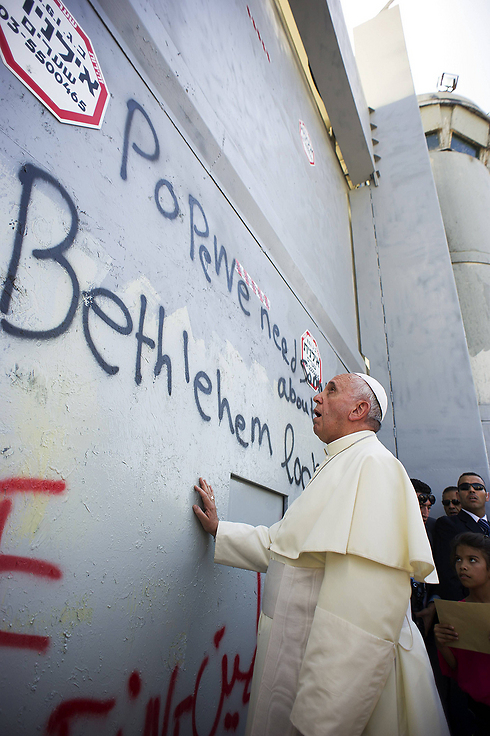 "In this, the birthplace of the Prince of Peace, I wish to invite you, President Mahmoud Abbas, together with President Shimon Peres, to join me in heartfelt prayer to God for the gift of peace," the Pope said at a Mass in Bethlehem.

"I offer my home in the Vatican as a place for this encounter of prayer," Francis said.

Asked about the invitation, a spokeswoman for Peres said in Jerusalem that he "always accepts any kind of initiative to promote peace."

Pope Francis arrived in the West Bank on Sunday to start the most delicate part of his stay in the Middle East, with visits to the Palestinian Territories and Israel, where his every word will be scrutinized.

Church officials say his three-day tour of the region, which started on Saturday in Jordan, is purely focused on religious issues. However, the dividing lines of the generations-old Middle East conflict will be impossible to ignore. Francis flew straight by helicopter to Bethlehem, becoming the first pontiff to travel directly to the West Bank rather than enter via Israel - a decision hailed by Palestinian officials as a recognition of their push for full statehood.

X
Pope Francis lands in West Bank.
The Pope is due to celebrate an open-air Mass in Bethlehem's Manger Square, close to where Christians believe Jesus was born. Underlining the power of symbolism, a mural has been erected there showing Jesus swaddled in a Palestinian keffiyeh, with his father, Joseph, also wearing the black and white headdress, made famous by the late Palestinian leader Yasser Arafat.

Authorities have likewise plastered images around the city comparing the experience of Palestinians to the suffering of Jesus, and officials have made sure the Pope will see the Israeli separation barrier that divides Bethlehem from Israel as he visits Palestinians at a nearby refugee camp. Israel says the wall is needed to prevent attacks by militants. 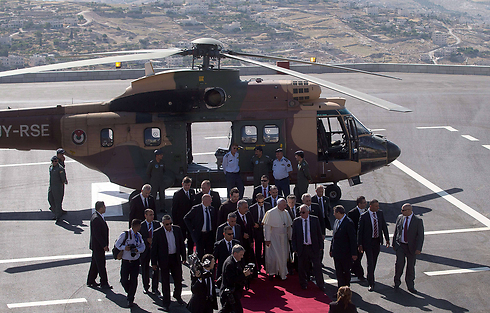 Pope France landing in Bethlehem (Photo: AFP)
His trip comes at a time of renewed uncertainty, with the latest in a long line of US-backed peace talks collapsing last month amid mutual recrimination and no clear ideas emerging over how to end decades of bloodshed and deadlock. The Vatican supports the vision of an independent Palestine living in peace alongside Israel, and Francis on Saturday called for a "just solution" to the conflict - the sort of neutral, anodyne language he is expected to adhere to during the stay. 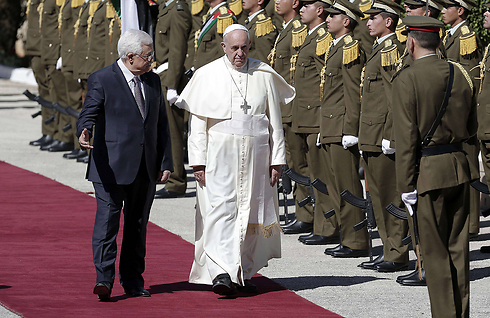 Pope Francis and President Abbas (Photo: AFP)
Francis also appealed in Jordan for an end to Syria's civil war, and in an unscripted message, called for arms makers to be converted to become "constructors or peace."

After barely six hours in Bethlehem, Francis will head to Israel, but to avoid a diplomatic tangle, he has to get back in his helicopter and fly to Tel Aviv for a welcoming reception, rather than drive the short distance to Jerusalem. Israel calls Jerusalem its eternal and undivided capital, having annexed Arab neighbourhoods seized in the 1967 war, including the Old City, the site of the main religious shrines. From there, he will get back in his helicopter and fly to Jerusalem for what he has said is the purpose of the whole trip - to commemorate the 50th anniversary of a historic meeting of Catholic and Orthodox Christian leaders, who moved to end centuries of bitter divisions between the two churches.

The Vatican's yellow and white flags flutter from lampposts across the city, and posters of a smiling Francis have been strung up from numerous buildings, but that might be as much as many locals get to see of him.

His decision not to use a bullet-proof car means Israeli security officials are clearing the roads and creating numerous "sterile areas" ahead of his 24-hour stay in the city.

"He is a guest here and we would like to assure that he goes back home safe and sound," said Oded Ben-Hur, a former Israeli ambassador to Holy See.

Reuters and the Associated Press constributed to this report.