After a day of prayers in Bethlehem, pope lands in Israel, urges mutual recognition and peace; Peres: You bring with you great tidings and hope for all'; Netanyahu: Israel is an island of tolerance for Christians in region.

Pope Francis arrived in Israel to much fanfare Sunday after his visit to Jordan and the Palestinian territories. The Roman Catholic pontiff landed at Ben Gurion Airport and was greeted with a state ceremony during which he urged peace and condemned the deadly shootings in Brussels as anti-Semitism.

Peres welcomed Pope Francis, saying "On behalf of the Jewish people and in the name of all the people of Israel, I welcome you with the age old words from the Book of Psalms: 'Welcome in the name of the Lord.' Welcome at the gates of Jerusalem."

Speaking after Peres and Prime Minister Netanyahu, the pope urged "all those responsible not to stop searching for fair solutions to allow Israelis and Palestinians to live in peace."

The pope thanked his hosts and said that Israel's right to exist, as well as internationally recognized borders, must be recognized, much like those of the Palestinians to a nation and freedom of movement.

Francis expressed hope for peace, lamenting that the holy city of Jerusalem "remains deeply troubled as a result of longstanding conflicts."

He called for a "just and lasting solution" so that Israelis and Palestinians may live in peace. He said Israel deserves peace and security "within internationally recognized borders," while the Palestinians have a "right to live with dignity and with freedom of movement" in their own homeland. 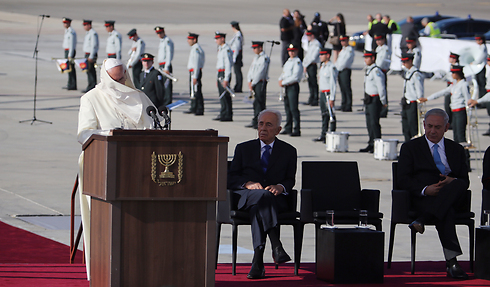 He also condemned the Holocaust as the "enduring symbol of the depths to which human evil can sink." Francis is to visit Israel's national Holocaust memorial, Yad Vashem, on Monday.

Veering off a prepared text, Francis deplored "this criminal act of anti-Semitic hatred" in Brussels, where three people, including two Israelis, were killed in Saturday's museum shooting.

"With a deeply pained heart, I think of those who have lost their lives in the cruel attack that occurred yesterday in Brussels," he said. "I entrust the victims to God's mercy and invoke recovery for the injured."

Peres praised the pope, who invited him and the Palestinian President Abbas to come to the Vatican and pray for peace earlier Sunday, and said "Even if peace calls for sacrifices, the sacrifices of peace are preferable to the threat of war... You bring with you great tidings and hope for all. You carry a message of brotherhood among peoples, and friendship for all. Nothing enriches more than love of humanity."

Peres attempted to draw a parallels between the pontiff's work and the values of Judaism: "Indeed, our Sages taught us that only love will build Jerusalem. You bring inspiration (and) a profound sense that the task of man is to mend the world – Tikkun Olam – and engage in scientific activities for which the sanctity of life are their supreme value.

"These values were voiced by the Prophets Isaiah and Amos in Jerusalem, and who represented a beacon to Jesus, the Nazarene, and to Saint Francis of Assisi, whose name and spirit you embraced, as Pope and Head of the Catholic Church."

Peres also commented on Saturday's events in Belgium, which saw four people killed in a shooting in the Jewish Museum, and praised the Pope for working to combat anti-Semitism. "We are grateful to you for assuming your sensitive and resolute stand against all expressions of anti-Semitism. Against all manifestations of racism. Only yesterday, criminals shot innocent people in the Jewish Museum in Brussels only because they thought they were Jewish. This is a manifestation that poisons wells and cannot be accepted."

Prime Minister Netanyahu welcomed the pope, telling him that his "visit is an important chapter in the history of the relations between Christians and Jews, a bond which has lasted for 2,000 years.

"Your Holiness, in the heart of the Middle East, the turbulent and violent Middle East, where Christians are often persecuted, Israel is an island of tolerance. We safeguard the rights of all faiths. We guarantee freedom of worship for all and we are committed to maintaining the status quo at the Holy sites of Christians, Muslims and Jews."

He further praised the Pope for his unique relations with Argentina's Jewish community. 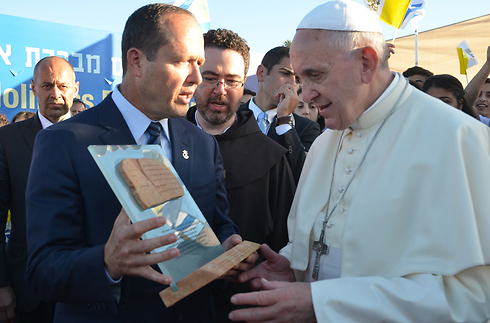 Before his arrival in Israel, Francis met with Palestinians at the Deheisheh Refugee Camp, where he listened to their grievances and hardships in the face of Israeli administration of the West Bank.

The Pope also held Mass at Manger Square in Bethlehem. At the service, Francis called on Israeli Peres and Abbas to come pray for peace at the Vatican next month. The offices of both presidents confirmed they would join the pontiff in Rome.

During his trip to the cradle of Christianity, France plunged into Mideast politics, calling the current stalemate in peace efforts "unacceptable."

In another unscripted moment, he prayed at the Israeli separation barrier surrounding the biblical West Bank town and briefly donned the checkered black and white headscarf that is a symbol of the Palestinian cause.