Pope: Christians, Jews, Muslims will work together to end conflict

Francis expresses 'hope pain of those afflicted by conflict in mideast will soon be eased,' tells Peres 'you are a man of peace, I admire the path you have taken.'

The overarching message of Pope Francis's speech in his meeting with President Shimon Peres in Jerusalem on Monday was the urgent need for peace.

Francis praised Peres, a Nobel Peace Prize laureate, for his efforts to solve the conflict.

"You are known as a man of peace and a maker of peace, and I express my admiration and thankfulness for your attitude," the pope told Peres.

Urging both sides to work together to find a resolution, the pope expressed "hope pain of those afflicted by conflict in Mideast will soon be eased."

"The holy places are not museums or monuments for tourists, but places where communities of believers live their faith, their culture, their charitable efforts. Thus, one must constantly protect their sacredness, thus protecting not only the legacy of the past but also the people who worship there today and those who will worship there in the future," Francis said. 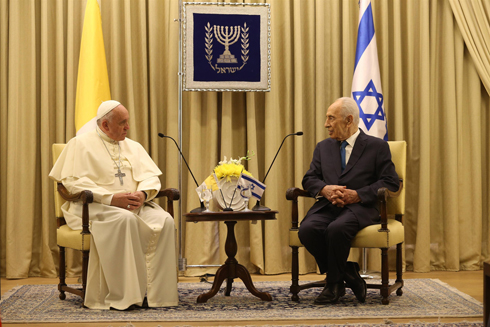 Reiterating his condemnation of "anti-Semitism in all its possible forms," ​​the pope also criticized the vandalism and "manifestations of intolerance against persons or places of worship for Jews, Christians and Muslims," after a recent spate of vandalism committed by Jewish nationalists against Muslim and Christian sites.

Peres returned in kind, saying he believed Francis' visit would contribute to revitalizing the peace process with the Palestinians, "based on two states living in peace, a Jewish state, Israel, and an Arab state, Palestine."

The president praised the humility in the pope's nature, noting that "the power in your spirit raised a spiritual elation and a thirst for peace. The values which you stand for enrich us and bring righteousness between people." 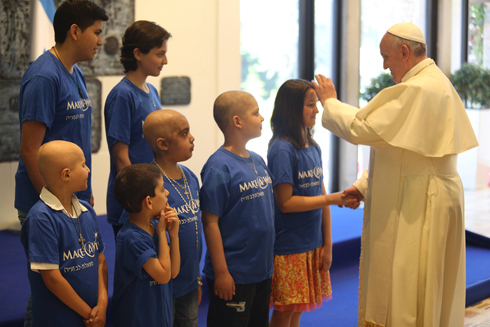 "Those who plant the seeds of evil today are the terror organizations. They have no pity and spread destruction. They kill without judgment, without distinction, without pity without logic," he said. "We must stand together to prevent the menace on the lives of people and on world peace."

Turning to religious leaders of all faiths, Peres asked to "show moral responsibility in the face of moral corruption."

"It is our duty that our children, the children of the world, regardless of religion or nationality, may live without fear and grow up in a world free of slaughter, a world which allows each person to live as a human being," he added. 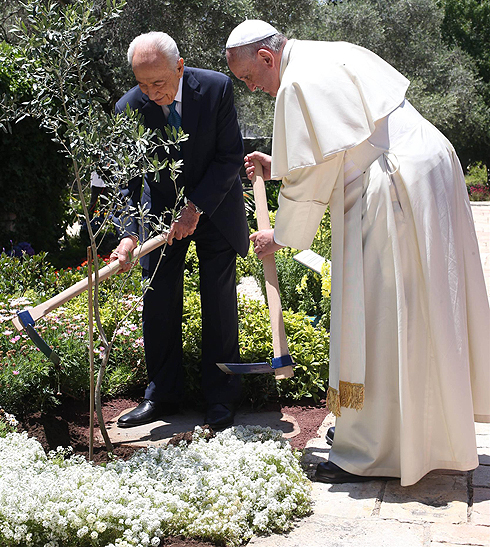 The president also stressed the importance of meetings between religious and political leaders. These encounters, he said, have the "ability to enhance political aspirations with the religious authority necessary to enable the compromises needed to achieve peace."

"I believe that your visit and call for peace will echo through the region and contribute to revitalizing the efforts to complete the peace process between us and the Palestinians, based on two states living in peace. A Jewish state – Israel. And an Arab state - Palestine," Peres told the pope.

"The threats of war will not bring peace. The dead will offer no praise. Only constructive perseverance can achieve peace. Only peace has the power to uproot poverty, overcome despair. Only peace can free people from tyranny," the president stressed.

"To the skeptics we shall say that we achieved peace with Egypt and Jordan, despite the fact that many saw this as a distant dream," he added.

Concluding his speech, Peres insisted the dream of peace is not yet dead, and can still be reached.

"I was young and now I am old. I learnt that dreams do not age and I recommend to all act accordingly."

Following their public comments, Francis and Peres planted an olive tree - a sign of peace - in the garden of the President's Residence, and then held a private meeting.

AFP and Attila Somfalvi contributed to this report.