They received the award in a special ceremony and in recognition of their contribution to the application of the Halacha in modern Jewish life. 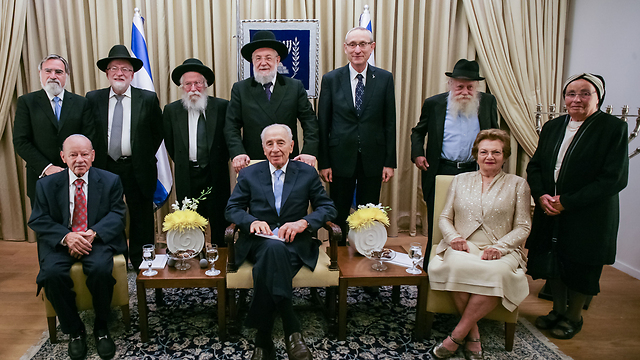 At the event, Rabbi Lau said of the recipients that "our discussions weren't difficult, there was unanimous agreement. This evening four of the great rabbis of our generation received the recognition they deserve on the eve of Jerusalem Day."

"This evening is our way of showing our appreciation to them for strengthening the role of Halacha in the modern world." Lord Rabbi Sacks, who spoke on behalf of the four recipients, said, "On behalf of my fellow prize winners I want to thank first of all these extraordinary individuals, Marcos and Adina Katz and the remarkable work they have done for the people of Israel for so long and with such distinction. Happy is the people which contains people like these. "The power of Torah is to make the most ancient text of religious history, eternally new. Throughout the ages Torah united Jews across space and time." The Katz Award was established in 1975 by Marcos and Adina Katz and is bestowed upon individual and enterprises engaged in the application of Halacha in the creation of written works and practical endeavors.