Senior Duma member says 'there are no sanctions nowadays,' adds only US can interfere with positive relations between Israel, Russia.

MOSCOW - While Israel is taking heat from the US for its refusal to take a public stand regarding the crisis in the Ukraine, Russia is sending messages of support. "Nothing can interfere with the strong relationship between Russia and Israel - unless a third party intervenes," said vice chairman of the committee on international affairs in the Duma, Alexander Romanovich, in a briefing for Israeli journalists and academics last week.

"I won’t name that party" he noted with a smile, while pointing at the western side of the world map behind him, referring to the US. But the decision to act on this threat won’t be made at the committee on international affairs. According to the Russian constitution, the president is the one who decides on the foreign policy, and the body managed by Romanovich is required only to find ways to execute the dictated policy. 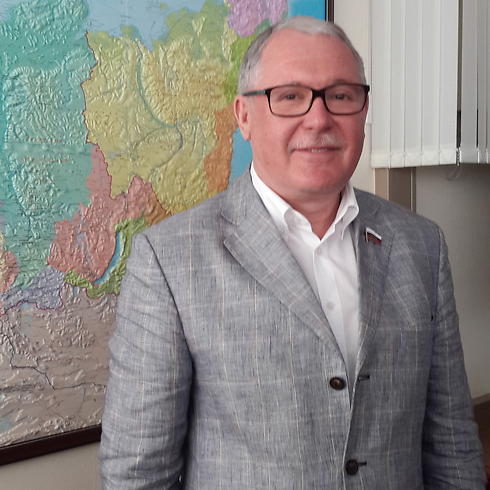 Vice chairman of the committee on international affairs in the Duma, Alexander Romanovich. (Photo: Polina Garaev)

The Russian politician, a member of an opposition party, emphasized that any decision of the president is then reviewed by the parties in the Parliament - "unlike in France," he added - but even he had trouble imaging a scenario in which the president’s decision would be overturned, at least in the case of the current President Vladimir Putin.

"Nowadays the political elite is rallying around the president, because we feel the decisions he makes are for the good of the country," explained Romanovich. "We argue on other issues."

One of the issues in dispute is the direction the Russian economy should turn to, but even in this regard there is an agreement that the annexation of Crimea will only attribute to economic development, in one way or another. "We need to turn Crimea into a model for other areas of Russia," noted Romanovich. "It will allow us to develop our industry and to create new opportunities all over the country." 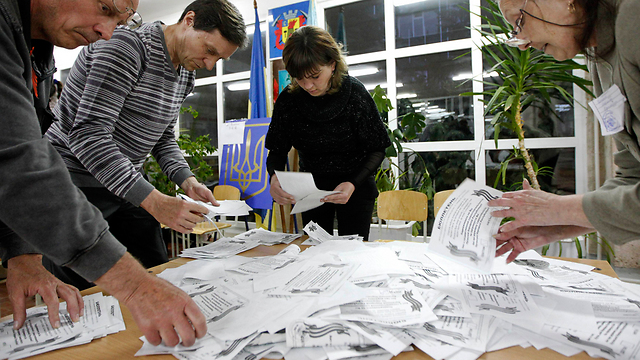 Counting referendum votes in Luhansk. (Photo: Reuters)
"The problem of Crimea is unlike any other territorial dispute in the world, it’s one of a kind," added Romanovich, when asked about the similarities between the Russian claim to the Peninsula - which ignores the Muslim minority who ruled Crimea before the Russians - and the Israeli-Palestinian dispute. "The Problem of Israel and the Palestinians is completely different," he stated. "If, to take Turkey as an example - before the Turks, the Greeks resided there and there is still a Greek minority, but the majority there lives in peace and speaks Turkish, and that would be silly to try and rebuild the Greek rule there. The affair in Crimea is entirely different." The attempt to establish Ukrainian control of the Peninsula was less successful, in his view, than in the Turkish case. As evidence, Crimea still hosts a majority of Russian speakers, and many of them voiced support of the Russian invention in the beginning of the crisis and later ruled in favor of annexation as part of a referendum. Since then two more referendums were held in eastern Ukraine and both ended with a pro-Russian decision, but Romanovich insured that they won’t be met with the same response from Moscow. "The referendum in Crimea was held in particular circumstances and with much degree of reliability," testified Romanovich. "People came and said, 'yes, we want to be a part of Russia.' But the other referendums were held under different conditions, and with all due respect, I can’t say they were reliable. That’s why we said we are monitoring the situation." Nevertheless, he added, "We emphasized that these referendums should be taken into account as part of the deliberations between Kiev and the regions." Moscow’s reluctance to annex more territories is not a result of fear of further sanctions from the west. "Sanctions? There are no sanctions nowadays," claimed Romanovich. "The chairman of our party, for example, is barred from traveling to Europe and the US and his assets there were frozen, but the west knows he and the other officials have no assets there."

"Moreover, if he needs to go visit a body like UNESCO, there are international treaties that forbid stopping him," he continued. "Some people under sanctions have already visited Europe like this. Therefore, the sanctions are a dead end. They are a weapon, and that leads to a use of counter weapons. There is no other way."

But Russia’s arsenal of responses does not include military action in Ukraine at the moment. "I’m appalled by the shortsightedness of western politicians who don’t understand the president’s words. He had said twice that there won’t be a military action in southeast Ukraine and still the world cries out. Nobody is planning to cross the border."