Earlier this month, the worst floods in some 120 years swept through Serbia, Bosnia and Croatia, killing at least 50 people and leaving some two million homeless or trying to repair damage to their homes. Now, two weeks after the floods, rotting animal carcasses are a health risk, and hundreds of thousands are still homeless.

An Israeli delegation of volunteers has spent the past week in Serbia, coordinating the volunteer efforts, after a request from the Serbian government.

"Many times volunteers want to help in crisis situations but since authorities are occupied, volunteers can become a liability rather than an asset,” Zeev Elizur, the director of Lev Echad (One Heart), an Israeli volunteer organization told The Media Line. “We’ve developed a doctrine of operations and we are quite efficient.” 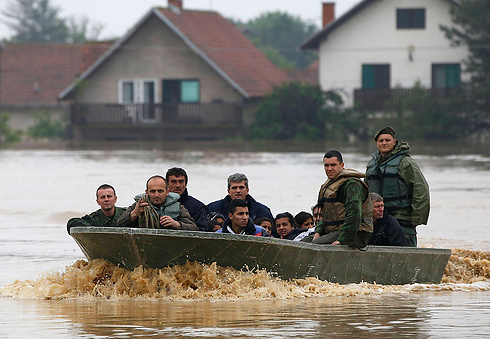 He said the request for help came from the Serbian government. The Israelis went to Krupanj, an area of 20,000 people from several villages that had been especially hard-hit by the flooding. Elizur said two people were killed in this area, and dozens of homes washed away by the landslide and the flooding.

“We did a preliminary mapping of the different needs and the different people working there,” he said. “There were various challenges. For example, a lot of the aid was just pumped in without any coordination.”

It is an all-volunteer organization, which needs to raise funds each time it tries to help. In this case, several of the group’s volunteers are students at the Shalem College in Jerusalem, which mandates that students do volunteer work. Shalem helped the students raise the money for the effort.

“It is heartwarming to see the network of volunteers we helped set up,” Alon Tuval, a student at Shalem told The Media Line from Serbia. “Young Israelis are making a connection with some of the elderly who live here, and helping determine exactly what their needs are and how we can help.”

In one case he said, an elderly man brought them a bottle of rakia, the local liquor, as a thank-you gift, and told them about the Jewish doctor who used to take care of him before the Holocaust. In another case, says Elizur, residents said the village used to shelter Jews during the Nazi era.

In some cases, the Israelis are the first foreigners they have ever met. Krupanj is a rural area, with pastoral villages.

“I was surprised by the contrast between these beautiful villages and the dimensions of the tragedy,” Tuval said. “I was also pleasantly surprised by how warmly we were received here.”

Recovery in Serbia will take years and will cost at least several hundred million dollars.