British intelligence gave the young IDF some 30 Nazi Enigma encryption machines, possibly in the hopes of spying on the newly established IDF.

Today's world of cyber technology reveals somewhat disturbing possiblities for its use in warfare. Former NSA agent Edward Snowden's leak of secret documents displays the frightening potential of modern day espionage and high-tech warfare, but Israel faced the dangers of the cyber world early in its existence when a Nazi built machine would have allowed Britain to spy on Israel's every move.

But how did such a Nazi relic of technology reach Israel?

The German made Enigma Machine was one of the main reasons Britain's intelligence service failed to adequately respond to the Nazi war machine during World War II. Their inability to interpret intercepted German communications hindered their ability to thwart aerial and maritime attacks on the isle as well as ongoing submarine attacks on supply boats.

Only towards the middle of the war did a team of British mathematicians and cryptologist led by philosopher and mathematician Prof. Alan Turing managed to finally break the machine's key codes. Polish intelligence managed to decipher the machine as early as 1932, but could not find the correct key codes to make their deciphered messages relevant and operational.

The success of Turing and his team was a pivotal movement in the war, and allowed the British to turn the tides in fighting on both the continent and in the Atlantic. 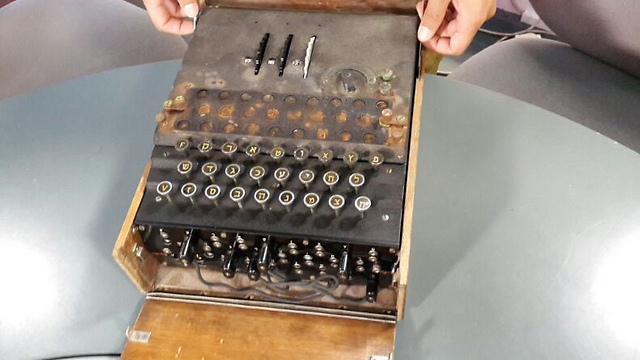 The Enigma machine was converted into Hebrew for use in the IDF. (Photo: Einat Alfasa)

British forces managed to get their hands on an enigma machine after downing a German submarine and sending three divers to extract it from the submerged ruins – only one returned from the deadly mission and he carried with him the coveted encryption device.

The device functions according to mathematic principles which translate into electronic pulses and rotors which alter alphabetical characters to produce a ciphered text. With the help of the key-code cracked by Turing, and identical operation procedures, a person at the receiving end of the machine can decipher an incoming message.

At the end of the war, when Britain began withdrawing from its colonies, among them Mandatory Palestine, they offered Enigma machines to their former subjects, of course they neglected to inform them that they already broke the code and could thus use the skill to decipher any additional messages sent by the machines. 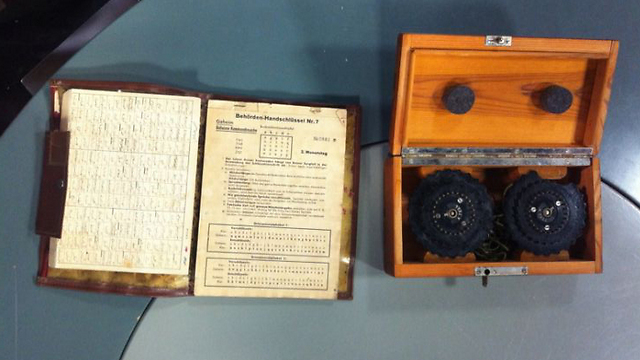 The Enigma machine and its instructions. (Photo: Einat Alfasa)

One such machine was offered to the newly established IDF, probably in an attempt to give the Brits the ability to keep track of their former colony's military, at the time in the middle of the War of Independence.

The IDF were more than happy to take 30 such machines, and immediately began the task of converting them into Hebrew and increasing their encryption complexity. The machines were all set and ready to go into operational use until something surprising happened: A British-Jewish mathematician who was on Turing’s team immigrated to Israel after the war and began working as a math professor.

One of the professor’s students told him in secrecy that the IDF received the machines from the British. At the time it was still unknown that the British had successfully broken the Enigma, and its code was still considered unbreakable in Israel.

The British mathematician was well aware of Britain's ability to decipher messages from the machine, and searched for a way to warn the IDF of the true price of the Brit’s generosity which would allow Her Majesty’s intelligence to spy on the IDF unhindered.

However, the man did not want to betray his homeland, and found a unique way to pass on the information. “Have you ever heard of the Trojan horse?” he asked his student, who immediately took the hint.

The message was passed onto the IDF and Ben Gurion himself took the Enigma out of operational use, before the IDF even got a chance to try it out.

Effectively, this was the first case of cyber warfare, and it took place in a time when computers were still rudimentary. Today we have ‘worms’ and ‘Trojan horses’ of a new and digital type, but its roots can be found some 60 years ago, much before the time of Edward Snowden.