TEHRAN - A commander from Iran's Revolutionary Guards has been killed in Syria, media said Saturday, a disclosure that runs counter to Tehran's insistence it is not fighting alongside President Bashar al-Assad's forces.

Reports that Abdollah Eskandari died while "defending" a Shiite shrine emerged earlier this week but neither the elite military unit nor Iran's foreign ministry have passed comment.

However, the Fars news agency reported that a funeral service would be held for the commander Sunday in the city of Shiraz.

Eskandari was formerly a commander of the Guards' ground forces and also headed a state-run charity in southern Iran that helps war veterans and families of fallen soldiers.

Neither the circumstances of his killing nor details about his role in the Syrian civil war - where Iran has staunchly backed the Assad regime - have been officially confirmed. 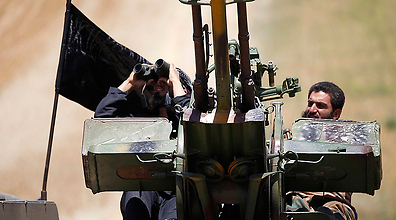 Syrian rebels reportedly killed a senior Iranian commander. (Photo: Reuters)
Since the conflict's outbreak in March 2011, Iran has provided Damascus with intelligence, material and military advisers. But Iran insists it has never sent combat troops to Syria, rejecting such claims made by mostly Sunni rebels fighting to overthrow Assad. Despite the denials, Iranian media occasionally reports the deaths of Iranian volunteer fighters killed in Syria. Among them was Guards commander Mohammad Jamali Paqale who was killed in November while "defending" the Shiite holy site of Zeinab shrine in Damascus. Iran is backing Assad to win a third seven-year term in a Tuesday election that rebels, their Western and Arab backers and critics are dismissing as a farce. The poll will only be held in government-controlled areas inside Syria and not in large swathes of territory that are in rebel hands.

"His people have realised (Assad) has prevented Syria from disintegrating or falling to occupation," Velayati added. The Syrian conflict has killed more than 160,000 people.