In visit to Israel, delegation of Hong Kong businessmen seek for collaborative opportunities with country's start-up hub; 'We would love to have something like Teva in Hong Kong,' visitor says.

For a group of 34 Hong Kong businessmen, investors and entrepreneurs, a visit to Israel last week (May 18-22) proved to be an eye-opening experience. The group was on a mission led by Invest Hong Kong (InvestHK), a department of the Hong Kong Special Administrative Region Government that seeks foreign direct investment and expansion in Hong Kong. “In Hong Kong, many know Israel for its holy sites, and not always for its technology,” said Teresa Poon, manager of innovation and technology at InvestHK.

“The idea is to showcase Hong Kong to Israeli companies. Hong Kong is a launching pad for businesses and start-ups with its well-established financial system and close connections with Mainland China,” said Charles Ng, the Associate Director of Investment Promotion for InvestHK. “We’ll roll out the red carpet and welcome new investors.”

“Young Israelis are very passionate and we want our young generation in Hong Kong to learn from this passion.”

“It’s the first time that Invest Hong Kong has brought such a large business delegation to Israel,” added Simon Galpin, the Director-General of investment promotion at InvestHK in an interview with Tazpit News Agency. 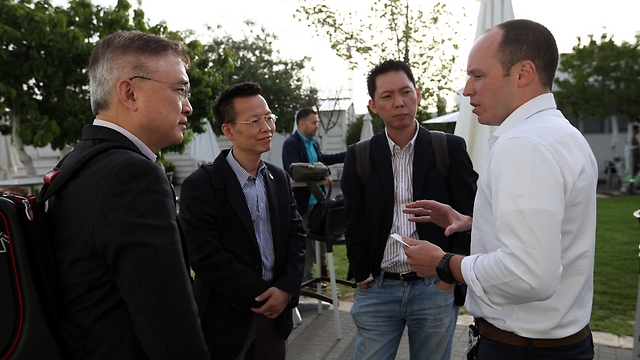 Hong Kong delegation in Jerusalem on May 19, meeting with Israeli startup innovators (Photo: Inbal Rose)
“We have been gradually building up in Israel, and we believe that there is a lot more room for Israeli companies in Hong Kong, especially in high-tech and start-up. We are looking for collaborative opportunities as well,” Galpin stated.

“The Israeli tech companies are very impressive,” Poon told Tazpit. “We would love to have something like Teva in Hong Kong for example.”

Israeli companies also supply Hong Kong with a variety of semiconductors, electronic valves and tubes, parts and accessories for office machines and computers.

This was Poon’s second visit to Israel, following a visit with her church group last year. But for most of the members in the Hong Kong delegation, it was their first trip to the Jewish state. Daniel Lee, a professor at the University of Hong Kong University and the head of the biotechnology department in Hong Kong Science Park was greatly impressed by his first trip to Israel including his visit to the Haifa Technion. “The best hidden treasures are here,” Lee told Tazpit. “Israelis have amazing innovative minds. You have 12 Nobel laureates!” “The mentality in Israel is different than in China – Israelis are more rebellious. There is creativity here. Another thing that stood out to me was the way Israelis cherish this small piece of land. They show great appreciation for it,” pointed out Lee.