The Palestinian unity government has been sworn in at the PLO headquarters in Ramallah, with the Palestinian President Mahmoud Abbas present at the event.

The brief ceremony at Abbas' West Bank headquarters was preceded by last-minute haggling over the makeup of the 17-member Cabinet of technocrats, signaling the continued tensions between the long-time rivals.

Hamas' threatened Monday to backtrack from its commitment to form a unity government with Abbas' Fatah because of the latter's move to dissolve the Palestinian Ministry of Prisoner Affairs. The group called the idea a "stab in the back" of Palestinian prisoners. 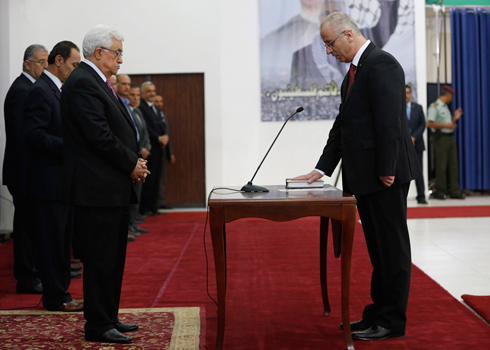 However, the government actualized after an agreement regarding the ministry was reached, according to which the ministry's responsibilities would pass to Palestinian Prime Minister Rami Hamdallah until a final solution to the issue will be found.

Abbas spoke at the event, and said it "marked an end to Palestinian division." Hamas in Gaza welcomed the coalition government of "all Palestinians".

Hamas's exiting prime minister Ismail Haniyeh said that the event was a "historical day which we forged together for the sake of the Palestinian people and the Palestinian cause."

Haniyeh further said that "today there is an army in the figure of the Izz ad-Din al-Qassam Brigades (Hamas' military wing). We are leaving the government, but the resistance is in excellent shape and can deter and protect that the Palestinian people." Haniyeh also praised the Palestinian prisoners hunger striking in Israel.

During the new government's first meeting, which was chaired by Abbas, the president said that the government is committed to the two-state solution along the 1967 border lines, recognizing Israel, renouncing violence and respecting past agreements.

"We are committed to what we said. Cooperation with Israel regarding security matters will continue so as to preserve the Palestinian interest," Abbas said. 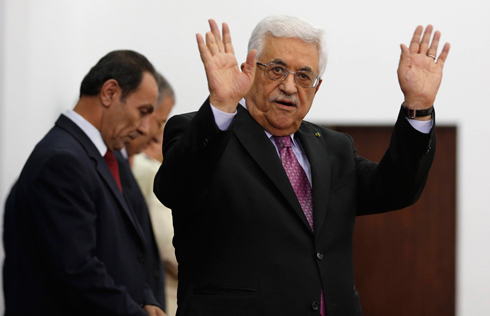 Muhammad Mustafa will retain his position as deputy prime minister for economic affairs, and Shukri Bishara will stay on as minister of finance, Ma'an reported.

Before the ceremony, Hamas' Gaza spokesperson Sami Abu Zuhri said that any unilateral move on part of Fatah to ratify the government would devoid it of legitimacy.

According to the spokesperson, Hamas has taken issue with Abbas' plan to dissolve the Palestinian Ministry of Prisoner Affairs in favor of forming a prisoner affair administration that would be under the PLO's control.

The prisoners' minister deals with Palestinians held in Israeli jails. Palestinians view the detainees as freedom fighters while Israel denounces them as terrorists.

"No, and a thousand times no. How could we possibly abandon those who have spent most of their life (in prison) for the sake of God?" Hamas Interior Minister Fathy Hammad told a gathering in Gaza that had been expected to celebrate the new government.

Senior Hamas official Khalil al-Hayya took things one step further and told Palestinian news agency Ma'an that Hamas would not join a unity government which does not include such a ministry. Dissolving prisoner affairs ministry is a "stab in the back of hunger striking Palestinian prisoners," he added. "We have made concessions in all stages and we agreed that the premier of the unity government be affiliated to Fatah, and we agreed that some of the ministers be affiliated to Fatah and the left wing Palestinian factions. However, some sides misunderstood our lenience and flexibility." However, senior Fatah official Azzam al-Ahmad said that the unity government would be announced and sworn-in at 1 pm, as scheduled, regardless of Hamas' threats, Ma'an reported. "Those who want to join the government are welcome, and those who want to evade and thus put obstacles in the way just as Israel does, let them take responsibility for their behavior," al-Ahmad told the Gaza-based al-Quds radio station, Ma'an reported. When asked by the Palestinian news agency to comment on Hamas' decision not to join a government which does include a prisoners' minister, the Fatah official said he "no longer knows who to converse with within Hamas." He further stress that the PLO has been nothing but committed to the causing of Palestinian prisoners, citing the last round of now defunct peace talks which he claimed Abbas ended after Israel refused to free a group of Palestinian prisoners.

Over the past seven years, repeated reconciliation attempts have failed, with neither side willing to make significant concessions, even though the split is unpopular among Palestinians.

But both Palestinian factions now have incentives to repair ties.

Hamas is in the midst of a major financial crisis due to a border blockade imposed by Israel and Egypt, while Abbas is in need of a political accomplishment following the collapse of peace talks with Israel in late April.

Roi Kais, Associated Press and Reuters contributed to this report