New rules come after Facebook campaign for 'David the Nahalawi'; social media infringements to include posts and 'likes' on posts that go against IDF values.

Officials recently announced that new rules will be introduced to govern the manner soldiers can express their views on Facebook and other social media platforms, and now even hitting "Like" can get you into trouble.

The rules are meant to prevent soldiers from using social media to express views that go against official IDF values. The crackdown on social media comes in response to a Facebook campaign in which soldiers uploaded pictures anonymously voicing solidarity with "David the Nahalawi".

David Admov, better known as David the Nahalawi (or David from the Nahal), was removed from his position as a combat soldier in the Nahal brigade after a video surfaced in which he was shown cocking his rifle at several Palestinian teenagers who appeared to be purposefully agitating him at his post.

It was later revealed that Admov had been removed and taken to military jail for several occurrences that had no connection to the video whatsoever. But before the public learned of his former infractions, such as throwing rocks at his officer, Admov found himself enveloped in support from his fellow soldiers as well as Israeli civilians who believed that he acted well within his rights and duties when he cocked his weapon. 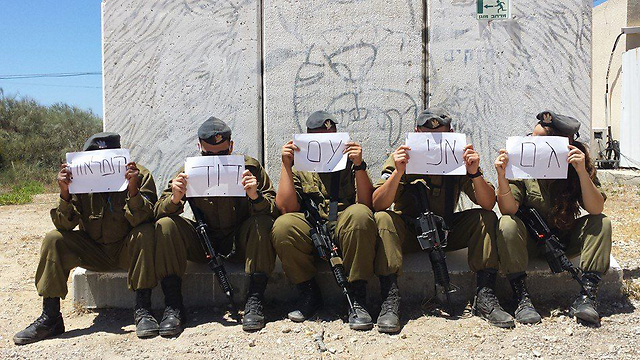 In light of this and other recent events on social media, such as pictures of nude female soldiers that spread on Facebook, Whatsapp and Twitter, the IDF announced the new rules to moderate what soldiers post, say, or even "Like" online.

The new rules will be introduced to soldiers upon their being drafted into the IDF, in order to explain "The dangers of using social media relate to privacy infringement and threatening addiction as well as the blurring of boundaries between private and public and military and civilian, together with the lack of control on the borders of the distribution and use of information for business purposes."

Commanders will reportedly stress to their soldiers that they will be allowed to use social media during their military service, but before they post they will need to ask whether content will harm individual security, intelligence security, or the IDF's promoted values. The plan also calls for soldiers to inform commanders if they witness such infractions on social media, while clicking "Like" on such a post would make that soldier responsible for the infraction as well.

Soldiers will no longer be allowed to post a "check-in" status while on base, or to upload forbidden content, particularly of sexual nature, including nude photos and pornography.

The chat application Whatsapp is also targeted in the new rules and commanders won't be able to message orders to their soldiers using the application.

Commanders will also be forbidden to request friendship from their soldiers on social networks.