Reuven Rivlin - from Beitar to the President's Residence

During his tumultuous 20 years in the Knesset, Rivlin spent two years as the minister of communications and two terms as the Speaker of the Knesset.

Likud MK Reuven Rivlin was elected the tenth president of the State of Israel on Tuesday, after winning the support of 63 of the Knesset members.

A member of Knesset for nearly 20 years, Rivlin served as the minister of communications and the Knesset Speaker. He was also the deputy mayor of Jerusalem and one of the managers of soccer team Beitar Jerusalem. 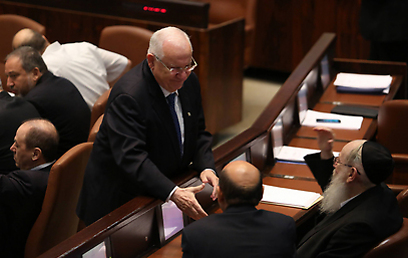 Rivlin was born in September 1939 and grew up in Jerusalem's upscale Rehavia neighborhood, where he attended the Gymnasia high school.

He was an intelligence officer in the IDF, and served under Mordechai "Motta" Gur during the 1967 Six Days War in the division that freed the Western Wall.

After his release from the army, Rivlin studied law at the Hebrew University in Jerusalem. 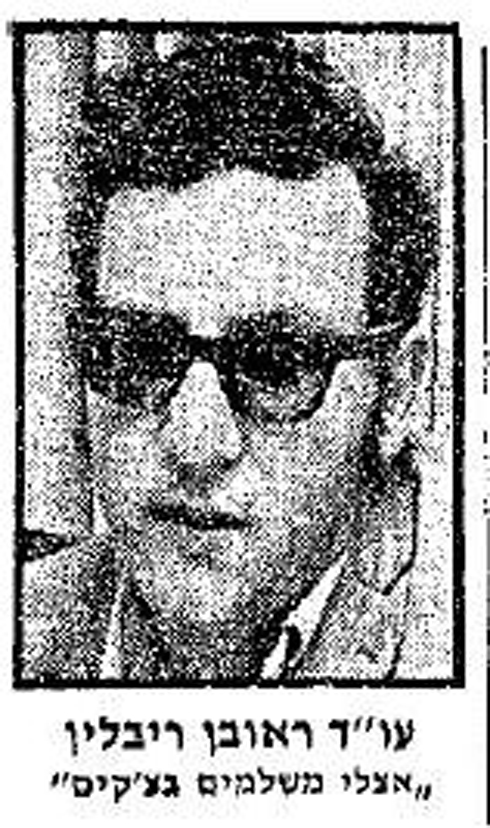 In the mid-60s, he became a central figure in soccer team Beitar Jerusalem, along with his brother Eliezer. He held several positions in the team's management, including serving as the team's manager. 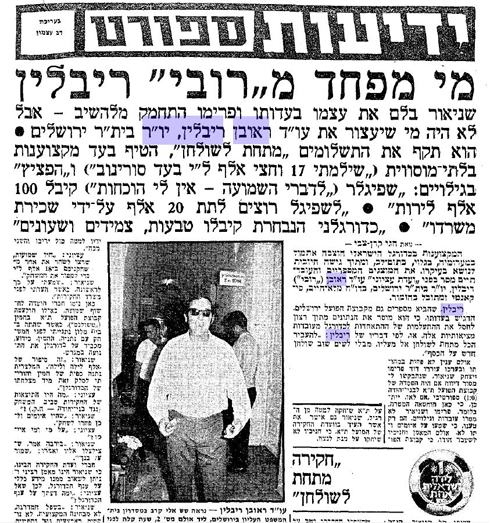 Rivlin during his time as Beitar Jerusalem manager (Photo: Yedioth Ahronoth Archive)
Rivlin was first elected to the Jerusalem city council in 1978, where served for 10 years. During that period, he also served as a member of the El Al board of directors, and as the chairman of the Israel Institute for Occupational Safety and Hygiene. In 1984, Rivlin ran for Knesset with the Likud party, and was placed in the 51st spot on the party's list.

From 1986-1993, he served as the head of the Herut party in the Jerusalem city council. 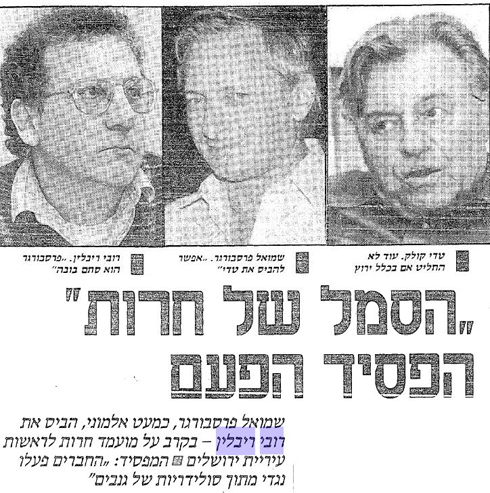 It wasn't until November of 1988 that Rivlin was first elected as an MK from the Likud party. In the Knesset, Rivlin served as the chairman of the Committee on Drug and Alcohol Abuse and a member of the Foreign Affairs and Defense Committee.

Due to his ties to former Likud MK David Levy, Rivlin lost the race for the head of the Likud party in the 1989 Jerusalem municipal elections, and was pushed out of the Likud Knesset list in 1992. 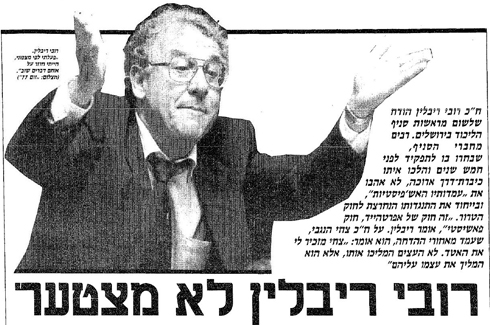 Rivlin 'not sorry' after being pushed out of Likud list (Photo: Yedioth Ahronoth Archive)

Rivlin against lost the race against Ehud Olmert to head the Likud party in the 1993 Jerusalem municipal elections. Olmert later went on to win the mayoral elections. 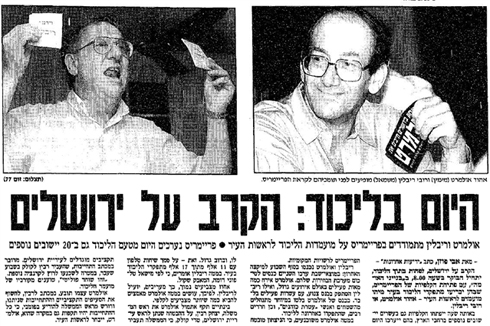 Despite his close ties to David Levy, when the latter left the Likud party to form the Gesher movement, Rivlin chose to stay faithful to the Likud. His loyalty paid off and he landed in the 33rd spot of the Likud Knesset list, but the party only won 32 seats. 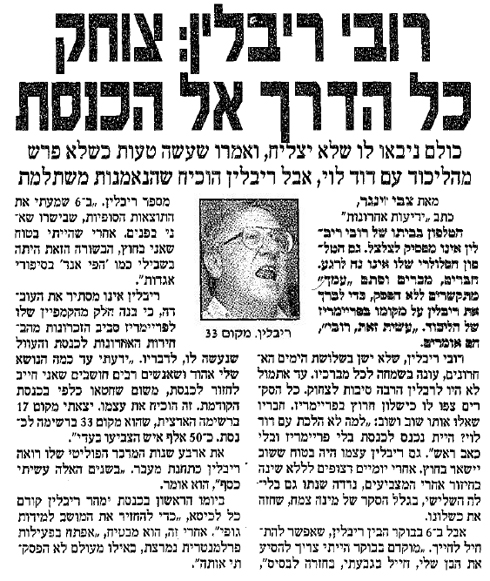 Rivlin did get to rejoin the Knesset in 1996, when MK Eliyahu Ben-Elissar was appointed Israel's ambassador to Washington. 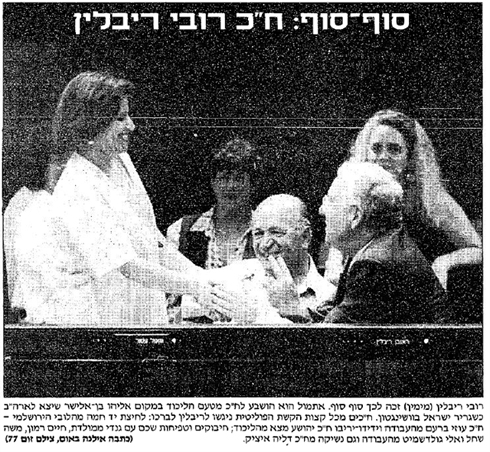 Rivlin being appointed Knesset member instead of MK Eliyahu Ben-Elissar (Photo: Yedioth Ahronoth Archive)
In 1999, despite public rows with fellow Likud MKs, Rivlin leapt to the 10th spot in the party's Knesset list. But he found himself in the opposition when Benjamin Netanyahu lost the election to Ehud Barak. In 2001, after Ariel Sharon defeated Barak in the elections for the premiership, Rivlin was appointed the communications minister, a position he filled for almost two years. During his time in the Communications Ministry, Rivlin promoted broadband internet services and initiated a reform in the postal service. On the other hand, Rivlin was unsuccessful in his attempts to privatize communications company Bezeq and to fully open the domestic communications market to competition.

In February 2003, when Sharon was re-elected, Rivlin was appointed as the Knesset Speaker in the 16th Knesset. He was moved to tears when 104 MKs voted for him, and promised to be "everyone's Knesset Speaker." 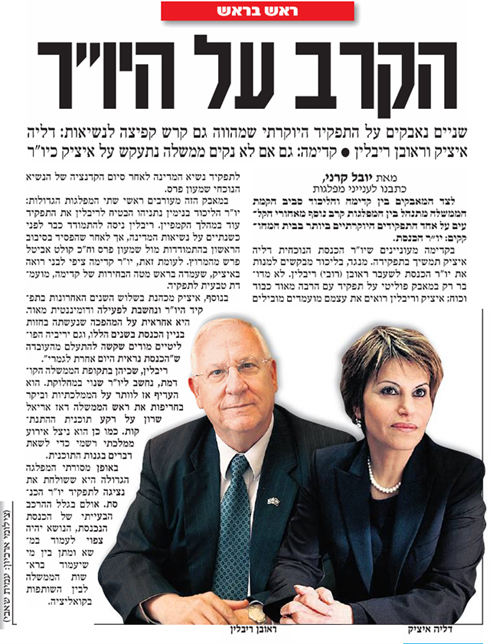 Rivlin faces off against Dalia Itzik in the race for Knesset Speaker (Photo: Yedioth Ahronoth Archive)

"We were elected to serve, we weren't elected to win. This House is a glass house. We stand public trial every day," he said in his first speech as Speaker of the Knesset. 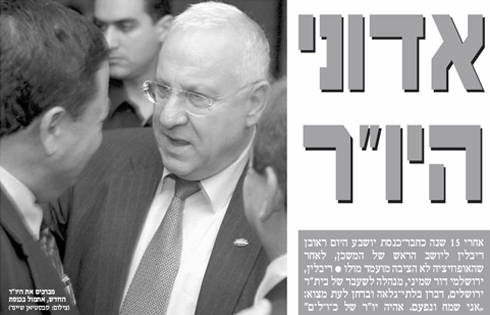 Rivlin wins vote for Knesset Speaker (Photo: Yedioth Ahronoth Archive)
After Ariel Sharon left the Likud party to form Kadima, Rivlin, who remained loyal to the Likud, tried to bring down Sharon's government, but failed. Rivlin ran for the president of the state of Israel for the first time in 2007. He won the support of 37 MKs and dropped out of the race before the second round of voting, in which Shimon Peres was elected Israel's ninth president. In 2009, when Netanyahu regained the premiership, Rivlin returned to the Knesset Speaker's seat.

During his second term as Knesset Speaker, Rivlin made several decisions that harmed the coalition. Among these, Rivlin decided not to allow deputy ministers to vote at Knesset committees, and objected to the "Mofaz Law." 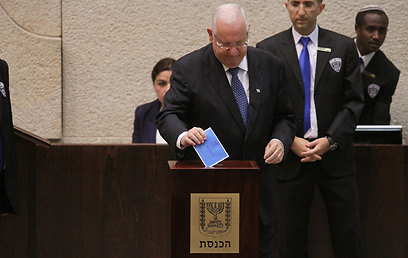 Voting for himself (Photo: Gil Yohanan)
He also had a fall out with Netanyahu early in his second term, but the two soon overcame their differences. A year later, Rivlin and Netanyahu's relationship, that saw many ups and downs, hit another low point. Slamming the prime minister, Rivlin said that "at least my wife doesn't appoint people." This fall out cost Rivlin his job as Knesset Speaker. In the current Knesset, Rivlin serves as a member of the Foreign Affairs and Defense Committee as well as a member of the Finance Committee. Netanyahu only reluctantly granted his backing to Rivlin, after his attempts to convince David Levy and Nobel laureate Elie Wiesel to run failed.