Rocket exploded in an open area near one of the communities in the Eshkol Regional Council
Photo: Roee Idan

A rocket fired from the Gaza Strip slammed into southern Israel Wednesday morning, causing damage but no injuries.

It is unclear whether Hamas, who relinquished control of the Gaza Strip as part of a Palestinian unity government with rival Fatah movement, was behind the attack.

In the past, Israel held Hamas responsible for any rocket fired from the Gaza Strip, treating it as the sovereign in the enclave. However, with the Palestinian unity government, the Palestinian Authority's technocratic government is now in charge.

After the Palestinian unity government was announced, Prime Minister Benjamin Netanayhu said "The agreement with Hamas makes Abbas directly responsible for any terrorist activity from Gaza." 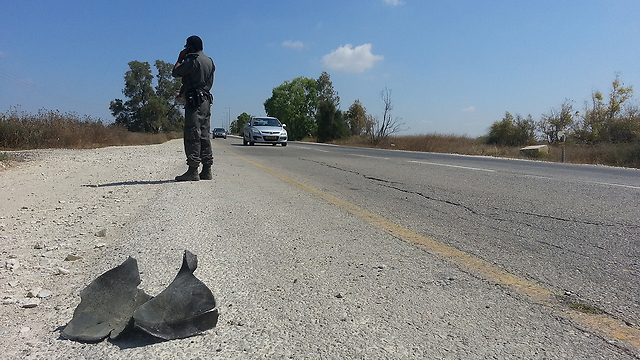 The rocket exploded in an open area near one of the area's main roads - Road 232 - near a community in the Eshkol Regional Council after a Color Red siren was sounded in the morning hours. Security forces are currently investigating the incident.

A senior Israeli security official said "the rocket fire proves the Palestinians have a pseudo-government, not something real. This is proof that (Palestinian President Abbas) does not control the strip.

"Hamas has already said - after the unity government was announced - that it would not lay down its arms and would continue its struggle against Israel. The sovereign in Gaza is still Hamas... Abbas had the chance to show he control the Gaza Strip, he should prove it."

The rocket hit a local business, causing light damage. The owner of the business, Hezi, spoke with Ynet, and said "We are still a little shaky, it was on the kibbutz's outer perimeter and there is no fortification here, so it's scary.

"We heard it whistle as it flew by and then heard a massive boom some 300 meters from us and the a mushroom of smoke. Now it continues, I return to my caravan, which even a bullet could penetrate, but still, we won't leave."

This is not the first time a rocket has been fired from the strip since the establishment of a Palestinian unity government. At the beginning of last week, the IAF attacked a number of terror targets in the Gaza Strip in response to rocket fire at the Sha'ar Hanegev Regional Council.

Last Sunday also saw a rocket explode on the Palestinian side of the Gaza border with Israel, after the projectile failed to make it out of the strip.

Since the start of 2014, some 140 rockets fired from Gaza Strip have hit Israel.

Yoav Zitun and Roi Kais contributed to this report