More than half of Palestinians oppose new talks with Israel, poll finds

Survey by Palestinian Center for Public Opinion also finds that 59% of respondents believe Hamas-Fatah unity will last this time.

More than half of Palestinians are against renewing negotiations with Israel, while less than one third think they should be restarted, according to a new poll conducted by a West Bank research center.

The survey, conducted earlier this month by the Palestinian Center for Public Opinion found that 56.3 percent of Palestinian adults believe the negotiations should not be restarted due to Israeli intransigence on prisoner releases and halting settlement construction, and just 30.3 percent say the talks should resume.

Nine months of US-brokered talks between Israel and the Palestinians ended in April, without results and with American officials blaming both sides for causing the negotiations to fail. An unnamed high-ranking US official told Ynet that the the settlements were major factor in the collapse of the talks. 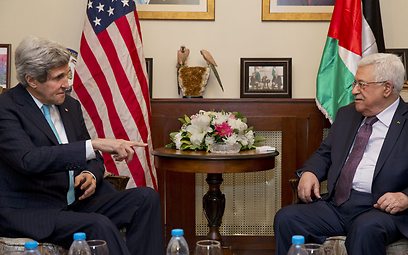 The respondents were, however, hopeful about the reconciliation between rival factions Hamas and Fatah, with 59 percent saying that they believed the agreement signed between the two sides in April "would succeed this time."

Just 30 percent said that they did not believe the reconciliation would last. Furthermore, when asked to rank the success of the newly installed "government of national consensus", Palestinians awarded it an average score of 6.24 out of 10. However, almost half of Palestinians (48.5 percent) said that they believed the decision to reconcile had come about due to "external pressures", while only a little over one third (36.4 percent) said that the move was down to "internal conviction". The poll was prepared by PCOP chief Nabil Kukali between June 2-9, and included a random sample of 1,000 Palestinians over the age of 18 living in the West Bank, East Jerusalem, and the Gaza Strip.