Palestinian Professor who took students to Auschwitz resigns over fallout

University officials dissapointed by resignation after giving support for Professor's trip including personal bodyguards upon his return.

AL-QUDS UNIVERSITY - The Palestinian professor who touched off a maelstrom of controversy by taking a group of students to visit the Auschwitz-Birkenau death camps in Poland is now at odds with his former employer after the school accepted his resignation.

Dr. Mohammed S. Dajani Daoudi, who headed the American studies department and served as chief librarian at Al-Quds University, stirred-up a hornets’ nest among Palestinians who felt that the visit was not appropriate when he led the March trip.

Daoudi told The Media Line that although the participants were students at Al-Quds, the trip itself was under the aegis of Wasatia, the NGO that he heads whose goal is to “promote a culture of moderation and reconciliation between the Israeli people and the Palestinian people.” But when the trip became a public issue, criticism was leveled at both the school and the professor.

Daoudi received threats and the employees union and students union, of which Daoudi was not even a member, formally banned him from membership.

On May 18, Dr. Dajani Daoudi submitted his resignation from Al-Quds University; a move incoming President Imad Abukishek says he was shocked by given the lengths the school went to on behalf of Daoudi, both personally and professionally.

“We thought he noticed what we did for him and that he would respect what we did for him,” Abukishek told The Media Line citing the assignment of two security guards to protect Daoudi and the confronting of the employees and students unions to demand the rescinding of the ban issued against the professor. But Daoudi saw the university’s response in a different light. In his letter of resignation addressed to outgoing President Sari Nusseibeh, Dr. Dajani Daoudi charged that as a result of the fallout from the Auschwitz trip, “The educational environment on this campus for teaching and learning is not available at your university which makes it difficult to practice my mission to educate and practice academic freedom.” In a statement to The Media Line, the administration strongly disagreed. Citing the school’s efforts to “act promptly and effectively to deal with the actions” of the two unions; and the assignment of two bodyguards, the administration insisted that although it “was being made to deal with ‘an external activity carried out by Professor Dajani in his private capacity as the CEO of an independent NGO which he runs (that)…had nothing to do with the University,’” Al-Quds nevertheless did all it could do “to deal with the repercussions of his visit.” The administration declared that it did “all that it could do to ensure that individuals, including Professor Dajani, had the right to express their views freely, and to act freely within the confines of the law, without fear of intimidations or threats.”

But Dr. Dajani Daoudi suggested that “the statement the administration issued in response to the trip sparked the incitement on campus, distancing themselves from the trip and me as if we are doing something wrong.” The assignment of security guards, according to Daoudi, exacerbated the problem rather than solving it. 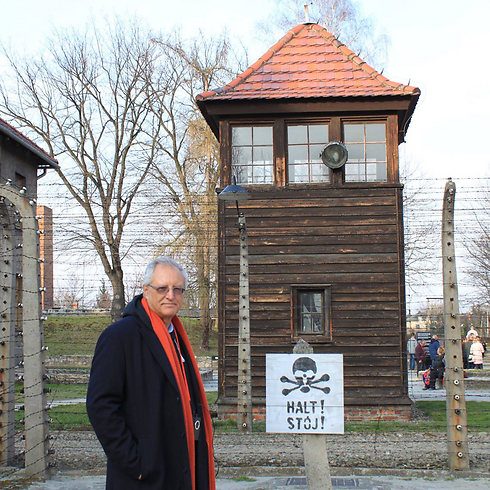 Dr. Dajani Daoudi at Auschwitz concentration camp.
“The high-pitched incitement against me made the university decide to have security guards escorting me on campus. How can I perform my duties under such circumstances?” he asked The Media Line. Dajani Daoudi, who has taught for more than 40 years, realized that the trip to Auschwitz-Birkenau would be controversial at best. He explained to The Media Line that, “The Holocaust has been a taboo topic in Palestinian memory and I believe for the sake of peace and reconciliation we need to deal with this taboo among others.” Students who traveled with Daoudi were exuberant and uniform in praise of their professor. Issa Jameel, the student coordinator for the trip, said he expects Daoudi to win the Nobel Peace Prize. “Over the ages there was a stage when the scholars were attacked by some because of what they taught. Dr. Dajani wanted to teach us students to think out of the box, far from politics, just for educational purposes and unfortunately what happened with him is the opposite because they viewed him taking us to Auschwitz politically and not from the educational level.” Speaking on the condition of anonymity due to the sensitivity and controversy, a female Al Quds University student who went on the Auschwitz trip expressed her surprise at word of Dajani Daoudi’s resignation and said she is “sad because he really enlightened us and made us think beyond the horizon.” In confronting the unions, outgoing Al-Quds President Dr. Sari Nusseibeh and successor Abukishek stressed “the values and principles we have at Al Quds University…that every member should have freedom of choice and freedom of expression and the diversity of it all.” The administrators admonished Daoudi that, “From our side, we will make sure that you will be safe, have the freedom of expression, freedom of choice, freedom to do whatever you want in our environment despite the fact that (going to Auschwitz) is not our (Al-Quds University’s) project. This is your project, your choice. But we will protect you and we nominate two security guards from Al Quds University to be with (you) all the time if (you) feel that (you) are not safe.” Despite the differing interpretations of the university’s actions, Abukishek said, “We thought he will take it (the resignation) back.” He said the personnel department “was waiting for Dr. Dajani to cancel the letter, but he refused to cancel the resignation.”

The trip and reaction to the trip has been carefully watched by international media because of the sensitivity of the Holocaust. Al Quds University historically recognizes the Holocaust. Incoming President Imad Abukishek suggested the trip would have stirred less of a row if what happened to the Jewish people in Poland was compared to the Palestinian experience.

“If you connect it this way, you will remove the sensitivity,” he suggested. But pragmatically, he urges that “Instead of digging into history, it’s important for both of us (Palestinians and Israelis) to look at the future generations, how they can live together and build the future together.”