IDF continues combing the West Bank in search for the missing teens; among those arrested is senior Hamas activist Hassan Yousef, other members of the Palestinian Parliament.

As Israel continued its the hunt for three Israeli teenagers missing since Thursday night, IDF soldiers arrested 80 Palestinians in the West Bank overnight Saturday, including senior Hamas members and Palestinian lawmakers, and placed a closure on Hebron and Bethlehem.

Among those arrested was senior Hamas activist Hassan Yousef, a former spokesperson for Hamas who is considered one of the organization's spiritual leaders, and members of the Palestinian Parliament Fathi Muhammad Ali Qar'awi, Hassan al-Bourini, Abdel-Rahman Zidan and Khaled Abu Arafa.

IDF searching for the missing teens

According to a senior military official, the arrests took place throughout the West Bank, including in Hebron, Ramallah and Tubas. A closure was imposed on southern Judea and Bethlehem, following a closure on Hebron that tookl effect at midnight.

It is still unclear who is behind the kidnapping of 19-year-old Eyal Yifrach and 16-year-olds Gil-Ad Shaer, and Naftali Frenkel. who disappeared apparently while hitchhiking home. There has been no sign of the three since, despite extensive searches of the West Bank by massive numbers of IDF troops and police.

"We are very careful about determining which organization is behind the attack. The purpose of the closure is to strengthen intelligence activities in the area of Hebron," the military official said.

IDF sources reiterated statements made by Defense Minister Moshe Ya'alon and said that "As long as we don't know differently, our working assumption is that they are alive."

The senior military official said that "There was a pipe bomb in Kalandia and several people who hurled stones, but that happens every night. All those who were arrested are Hamas members, including members of the Palestinian Parliament, and that is considered unusual. This is not to say that Hamas intends to carry out an attack and we are not saying that the attack came from Hamas, but the attack is severe and we are responding accordingly. We are also expanding collection actions in the area." 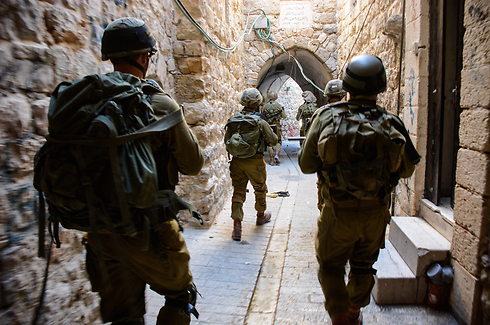 Prime Minister Benjamin Netanyahu declared Saturday night that "our boys were kidnapped by a terror group, undoubtedly." Netanyahu outlined his instructions to security forces at the end of a press conference at the Defense Ministry headquarters "to implement all the tools we have to find them (and) prevent their transfer to Gaza or another place (and) prepare all of our forces for any possible scenario."

More than 2,000 IDF troops have been dispatched to the West Bank to search for the boys. IDF Spokesman Brig.-Gen. Motti Almoz said the current mission was to return the boys home safely. “We are concentrating all of our intelligence efforts on trying to track down the missing individuals,” he said.

Police received a preliminary report about the disappearance of the three teens in the West Bank at around the time of the assumed kidnapping on Thursday night, it emerged Saturday. However, the police did not begin searching for the teens or inform the IDF and Shin Bet until the father of one of the boys went to the police in the early hours of Friday morning.