Hamas denies accusations made by PM, calls them 'foolish'; in afternoon briefing to foreign press, Netanyahu says Hamas denials won't change fact they were behind kidnapping.

Prime Minister Benjamin Netanyahu and Hamas were engaged in a war of words on Sunday as the prime minister accused the Islamist organization of perpetrating the kidnapping of three Israeli teens, while the Palestinian movement denied and dismissed Netanyahu's claims as "foolish."

"This morning I can say what I was unable to say yesterday, before the extensive wave of arrests of Hamas members in Judea and Samaria," Netanyahu said at a special cabinet meeting. "Those who perpetrated the abduction of our youths were members of Hamas – the same Hamas that Abu Mazen (Palestinian President Mahmoud Abbas) made a unity government with; this has severe repercussions."

Hamas denied the accusations, terming Netanyahu's statements as "foolish". Sami Abu Zohari, the Hamas spokesman in the Gaza Strip, noted that while the arrests carried out by IDF troops of Hamas people intend to break them, Israel will not succeed in doing so.

In a statement to foreign press on Sunday afternoon, the prime minister insisted that "these teenagers were kidnapped and the kidnapping was carried out by Hamas members. Hamas' denials do not change this fact."

"This attack should surprise no one, because Hamas makes no secret of its agenda," Netanyahu told members of the foreign press. "Hamas is committed to the destruction of Israel and to carrying out terrorist attacks against Israeli civilians, including children."

"Israel will act against the kidnappers and their terrorist sponsors and comrades. We will do whatever needs to be done to protect our people, our citizens, our children and our teenagers, from the scourge of terrorism," he said.

He also had harsh words of criticism for Palestinian Authority President Mahmoud Abbas. "Instead of abiding by his international obligation to disarm Hamas, President Abbas has chosen to make Hamas his partner," he said.

IDF soldiers arrested 80 Palestinians in the West Bank overnight Saturday, including senior Hamas members and Palestinian lawmakers, and placed a closure on Hebron and Bethlehem.

Among those arrested was senior Hamas activist Hassan Yousef, a former spokesperson for Hamas who is considered one of the organization's spiritual leaders, and members of the Palestinian Parliament Fathi Muhammad Ali Qar'awi, Hassan al-Bourini, Abdel-Rahman Zidan and Khaled Abu Arafa. According to a senior military official, the arrests took place throughout the West Bank, including in Hebron, Ramallah and Tubas. 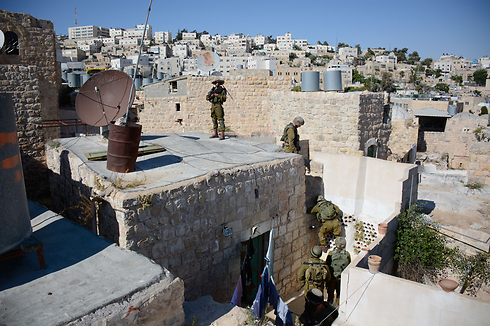 A closure was imposed on southern Judea and Bethlehem, following a closure made from midnight on Hebron.

Israel has reportedly enlisted the aid of Egypt in the search for the three missing Israeli teens – Eyal Yifrah, Gil-Ad Shaer, and Naftali Frenkel – that have been missing since Thursday evening, Egyptian newspaper Ash-Shuruk reported Sunday morning. According to sources, which the paper described as "credible", Egypt approached senior members of Hamas and Islamic Jihad to discuss the implications of the incident and to attempt to understand if the hostages are still alive or not. In addition, Egyptian authorities put military forces in Rafah, on the Sinai-Gaza border, in high alert.

Egyptian media further reported that Israel is taking steps, including the use of helicopters and patrols, in the Sinai border in an attempt to prevent the possible transfer of the hostages to the Sinai Peninsula and from there to the Gaza Strip.

On Saturday, it was revealed that police received a preliminary report about the disappearance of the three teens in the West Bank at around the time of the assumed kidnapping on Thursday night. However, the police did not begin searching for the teens or inform the IDF and Shin Bet until the father of one of the boys went to the police in the early hours of Friday morning.