Hundreds of fighters from the Shimshon Battalion of the Kfir Brigade stop training session in Golan; soldiers expected to participate in closure procedures on Hebron.

Following the IDF's situation evaluation, the military has decided to deploy an additional infantry battalion to the Hebron area, and has simultaneously started a limited recruitment of reserve soldiers.

IDF's operation to return the three missing teenagers has been named "Operation Bring Back Our Brothers."

IDF combs the West Bank in search for the missing teens

Security forces gathering combat intelligence, including a unit that uses surveillance blimps, have been deployed near Hebron, as part of IDF's efforts to collect intelligence in the field.

Meanwhile, following the rocket fire on southern Israel on Saturday and the Israel Air Force's retaliatory strikes, the Iron Dome missile-defense system was deployed to the Ashdod area on Sunday.

Hundreds of fighters from the Shimshon Battalion of the Kfir Brigade have already stopped their training session in the Golan Heights, and are making their way to the Judea region. The fighters are expected to impose closures on various cities, towns and villages in the West Bank. Altogether, the forces that have been deployed to the area of Hebron amount to more than 2,500 soldiers.

IDF forces, including fighters from the Kfir, Paratroopers and Nahal brigades, continued with both regular and clandestine operations in Palestinian areas Sunday, mostly in villages located north-west of Hebron, including Tarqumiyah, Hulhul and Beit Kahil. 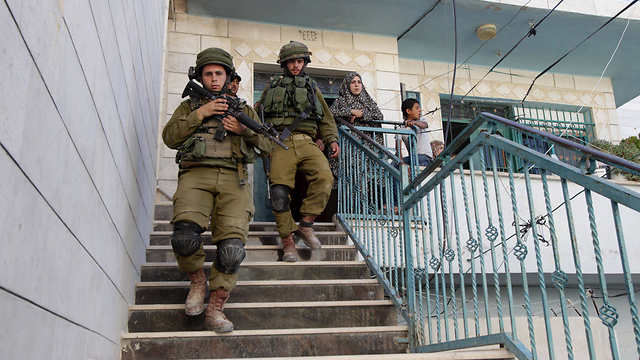 IDF forces in the West Bank (Photo: AFP)
The IDF is imposing a partial closure in these villages, setting up checkpoints in the entrances to the villages and checking incoming and outgoing vehicles. The burnt Hyundai car, that might be linked to the kidnapping, was found by the Palestinian police in that area on Friday. According to officials in the defense system, the focus of the investigation was in trying to find leads coming out of this area. In other areas of the West Bank, including the city of Hebron, life continues as normal. The entrances to the city remain open to Palestinian movement - both by vehicle and on foot - but those with work permits in Israel from the Hebron area and not allowed to cross the Green Line.

The objective of these steps is to increase the intelligence pressure in the field in the hope that the increased military activity causes the abductors to make a move or make a mistake, and with that lead to finding the teens.

Prime Minister Benjamin Netanyahu said Sunday that "Hamas people" are those who carried out the kidnapping of the three Israeli teens on Thursday evening. "This has severe repercussions," Netanyahu clarified.

"This morning I can say what I was unable to say yesterday, before the extensive wave of arrests of Hamas members in Judea and Samaria," Netanyahu said at a special cabinet meeting. "Those who perpetrated the abduction of our youths were members of Hamas – the same Hamas that Abu Mazen (Palestinian President Mahmoud Abbas) made a unity government with; this has severe repercussions."

Hamas denied the accusations made by Prime Minister Netanyahu, calling them "foolish". Sami Abu Zohari, the Hamas spokesman in the Gaza Strip, noted that while the arrests carried out by IDF troops of Hamas people intend to break them, Israel will not succeed in doing so.

Sixteen-year-olds Gil-Ad Shaer from Talmon and Naftali Frenkel from Nof Ayalon disappeared on Thursday night along with Eyal Yifrach, 19, from Elad, apparently while hitchhiking home. There has been no sign of the three since, despite extensive searches of the West Bank by massive numbers of IDF troops and police.