Dozens of Hamas operatives nabbed overnight, including head of Palestinian parliament; Palestinians report one man killed in clashes with IDF.

"We have one objective - find the three teens, bring them home, crack down on Hamas as hard as possible and move forward," Gantz told senior officers at the Central Command.

The IDF arrested dozens of Hamas operatives in the West Bank in the early morning hours of Monday, among them former speaker of the Palestinian Legislative Council (PLC) Aziz Duwaik.

In overnight clashes with the IDF forces in Jenin and Jalazone, one Palestinian was reportedly killed.

A senior army official said that by 6:30 am, the IDF had arrested about 40 people, and the number is expected to rise to around 50. In total, some 150 Palestinians have been arrested since the beginning of the operation to find the missing teens.

In addition to the activity on the field, the government is looking into increasing the pressure on Hamas, the Islamic organization that, according to Prime Minister Benjamin Netanyahu, kidnapped the three teens on Thursday.

The cabinet was set to meet Monday to discuss the possibility of exiling several Hamas leaders in the West Bank to the Gaza Strip.

A senior government official said Monday morning that "this option is being examined by the Attorney General. We want to deport a few officials to Gaza, including those in administrative detention on hunger strike."

Duwaik, 66, was arrested in his home in Hebron. He was elected speaker of the PLC in 2006, but the legislative council has been inactive for a few years, ever since Hamas took over the Gaza Strip in 2007.

Several months later, after the abduction of IDF soldier Gilad Shalit, Duwaik was arrested and spent three years in Israeli jail. He was arrested again at least once after his release. 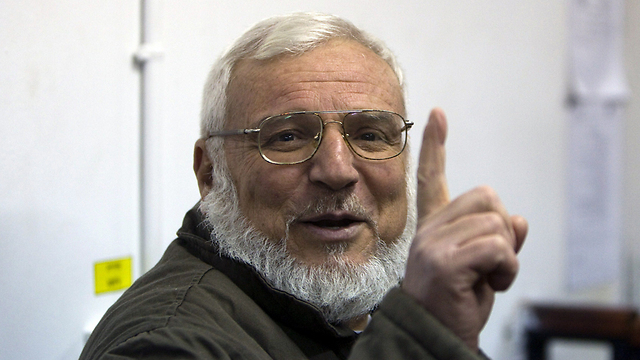 Aziz Duwaik (Photo: AFP)
According to the Palestinian constitution, the head of the legislative council is the stand-in for PA President Mahmoud Abbas if necessary. According to the recently signed Palestinian reconciliation deal, general elections were scheduled to take place in the Palestinian Authority early next year. The arrests in recent days could hurt Hamas' ability to continue its political rehabilitation in an attempt to take over the West Bank as well. Other Hamas parliamentarians and senior operatives in the Hebron area were arrested along with Duwaik.

Raids and arrests of senior Hamas figures were also done in Nablus. 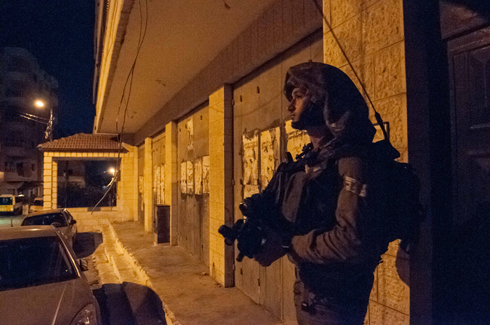 IDF activity in the West Bank overnight (Photo: IDF Spokesman's Office)
"We are looking ahead at increasing the activity against Hamas, with an emphasis on the Hebron area, but this activity begins in the northern Samaria. The closure in the southern West Bank continues," a senior military official said.

Among other things, Israel plans to shut down different institutions linked to Hamas, and prevent the transfer of funds.

In a leaflet distributed overnight, the al-Aqsa Martyrs' Brigades, a Palestinian militant group in the West Bank, claimed responsibility for the kidnapping. It is unclear whether the document is credible.

The leaflet's authors wrote that the three teens were in safe hands, but were outside the Hebron area.  The leaflet went on to say the teens will only be freed in return for the release of thousands of Palestinian prisoners.

Even so, the organization, which was affiliated with Fatah in the past, has been inactive for several years, and Israel views Hamas as the one behind the abduction.

Three Palestinians were wounded in the raid of the house, which was likely done by shooting a missile at the door.

"We fired at the house and the two immediately turned themselves in," the IDF said, "A baby was lightly wounded and treated."

Overnight, Palestinians in the Jalazone refugee camp near Ramallah clashed with IDF forces. Violent clashes were registered near Jenin as well.

According to Palestinian reports, 20-year-old Ahmad Sabarin was shot in the chest and died upon his arrival to the hospital with two other wounded. The IDF said it was looking into the claims.

"We found relatively simple weapons in the two raids," the IDF said.

Israel's Coordinator of Government Activities in the Territories, Yoav Mordechai, gave a rare interview to Palestinian news agency Ma'an on Sunday, saying the IDF had several leads on the abduction of the three teens, but refused to elaborate. He added that the investigation is made in complete secrecy and denied Israeli coordination with the Palestinian Authority or Egypt in the search for the three.