With almost chilling timing, the Knesset has in recent days been dealing with a new bill to limit the government's authority to decide freely on releasing security prisoners. The bill could hamper any prisoner swap for the three Israeli teenagers believed kidnapped by Hamas operatives in the West Bank on Thursday night.

Past experience shows that despite the fact that the kidnappers have not yet made any demands, they will probably expect the release of Palestinians murderers jailed in Israel in exchange for the boys.

A few days before the abduction of Eyal Yifrach, 19, Gil-Ad Shaer, 16, and Naftali Frenkel,16, the Knesset saw the advancement of several bills to limit terrorist releases during negotiations. The first, approved by the government a week ago (after it was held up in the Ministerial Committee on Legislation) and it allows a judge to sentence a convicted murderer to life in jail with no parole. The bill, drafted by MK Ayelet Shaked (Bayit Yehudi) and Hatnua's David Tzur, and sponsored by Coalition Chairman Yariv Levin of Likud, passed its preliminary reading in the Knesset plenum.

The bill is essentially an amendment to the Basic Law: The President of the State, which allows judges to consider at sentencing the severity of the murder and decide in special cases to prevent future clemency.

The bill basically takes away from the government the option of freeing terrorists – an issue that drew harsh criticism during the four-stage release that Israel approved last year as part of diplomatic negotiations with the Palestinians.

"The entire Israeli people are praying today for the return of the boys," said Shaked on Monday. "Releasing terrorists is like spilling more fuel onto the terrorist bonfire, and would encourage more and more abductions. It's time to shift direction.

"Vile murderers should die in prison and never be released, and terror organizations should be aware of this. The bill would prevent mass murderers from being released in future deals. This bill is moral and worthy."

'No swaps for dead bodies'

Meanwhile, MK Elazar Stern of Hatnua is also promoting his own bill, which he submitted to the Knesset last week. Stern proposes a regulation of government principles for prisoner exchange negotiations with terror organizations, and points out that the conclusions of 2008 Shamgar Commission on prisoner releases have not been adopted. 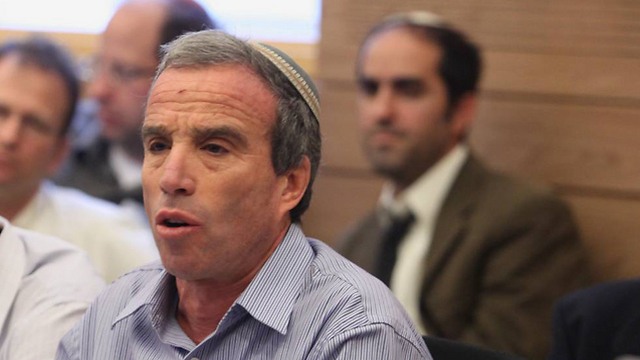 Stern proposes that Israel release one terrorist in exchange for one soldier; that no living terrorists are released in exchange for bodies of IDF soldiers; that the terror organization with which Israel is negotiating chooses the terrorists it wants freed from a closed list determined by Israel. Furthermore, Stern's bill suggests, should the government see fit to release prisoners in order to advance negotiations with a terror organization, it would have the option of only freeing up to 10 terrorists without receiving any prisoners in return.

The bill also determines that living conditions of prisoners linked to terror organizations that have abducted a soldier would be reduced to the bare minimum, but in accordance with binding international conventions signed by Israel. This would take effect within 72 hours from the moment of any abduction.

"Israel is known for its willingness to pay a heavy price to free its captive soldiers, as well as for the bodies of soldiers who died during battle," wrote Stern, a former IDF general, in the bill he submitted to the Knesset even before the recent kidnapping. He also highlighted prominent examples of massive prisoner releases in return for a handful of soldiers:

"All in all, the Israeli government has released 7,500 terrorists, some with blood on their hands, for just 14 living soldiers and civilians, and the bodies of six soldiers," said Stern.

Stern maintains that the principles of his bill are "based on the recognition that the release of many terrorists for a small number of soldiers, or their bodies, creates an incentive to continue abducting soldiers for bargaining needs and returns these dangerous terrorists to the ranks of the terror organizations.

"In addition, the release of terrorists harms deterrence of potential terrorists as they realize their family would receive financial aid and they would win fame and release in the next deal."