Abducted Israeli teen has strong ties to US

The family of an Israeli-American teen believed to have been abducted in the West Bank says it has received an outpouring of support from friends and family back in the US.

Naftali Frenkel is believed to have been abducted late Thursday with two other teens, Gil-Ad Shaer, 16, and Eyal Yifrach, 19, as they were hitchhiking home from a school in the West Bank. Since then, Israel has been on a furious search for the boys, arresting dozens of members of the militant group Hamas, which Israel's prime minister says is behind the kidnapping. The teens have not been heard from. 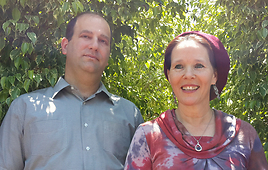 Frenkel's grandparents moved to Israel from the Flatbush neighborhood of Brooklyn in 1956. Although Frenkel, 16, was born and raised in Israel, he paid brief visits to the US while growing up, said his aunt, Ittael Frenkel.

She said most of his cousins, aunts and uncles live in the US, mostly in the Flatbush area of Brooklyn, the New York suburb of Monsey and other parts of the state.

She said her brother's synagogue and other synagogues in Brooklyn have been organizing prayer vigils for the teen. A prayer vigil was scheduled for later Monday outside the Israeli consulate in New York.

Frenkel's family affirmed its trust in Israel's rescue efforts and expressed gratitude for the nationwide support. The story has generated round-the-clock news coverage, and more than 10,000 people gathered at the Western Wall in Jerusalem late Sunday to pray for the teens' safety.

"He is a kid full of happiness and smiles," said Ittael Frenkel. "We are optimistic; we really hope to see him home soon."

As the search entered its fourth day, the ordeal continued to capture national attention with nearly nonstop updates by Israeli media.

Naftali Frenkel and his six siblings are American citizens. His aunt confirmed the family has been in contact with the US Ambassador to Israel.

US Secretary of State John Kerry on Sunday condemned the kidnapping, stopping short of assigning blame to Hamas. "We are still seeking details on the parties responsible for this despicable terrorist act," Kerry said.

Israeli Prime Minister Benjamin Netanyahu has blamed the disappearance of the teens on Hamas, which is labeled a terrorist group by Israel and the West. Hamas denies any role in the kidnappings and called the accusations "stupid."

"We are of course very, very worried, we really, really want to see him home fast," said Ittael Frenkel.