Operation Bring Back Our Brothers is entering its fifth day Tuesday, with over 200 Palestinians arrested, 41 of which overnight, as the search for Eyal Yifrach, Gil-Ad Shaer and Naftali Frenkel continues.

The three teens were apparently kidnapped Thursday night and no group or organization has made any accepted claims of responsibility for the abduction. The working conclusion is that Hamas operatives kidnapped the teens though it is unclear if the organization's leadership sanctioned the attack. A senior IDF source said forces were now focusing their efforts on "cleaning house" in the West Bank city of Nablus, which they described "the terror capital."

According to the senior official, roughly a thousand Nahal Brigade soldiers were operating at the Balata refugee camp and town of Awarta, and weapons, explosives, guns and ammunition were found. 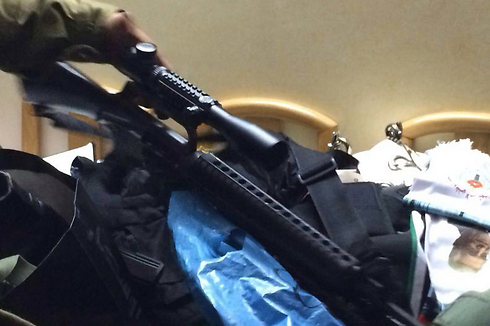 Weapons found in overnight operation (Photo: IDF Spokesman)
"The IDF does not feel as if the hourglass is running out of time," the source said, stressing that the IDF would "continue to deliver a strong blow to Hamas and strike down anything that is related to Hamas." They further noted that cooperation with the Palestinian Authority was "very professional."

Civil Administration forces also raided several Hamas-affiliated institutions in the Hebron area. The aim of the raid was to collect documents and additional materials that could incriminate and link the institutions to terror activities in the area of the West Bank, namely in regard to the kidnapping. 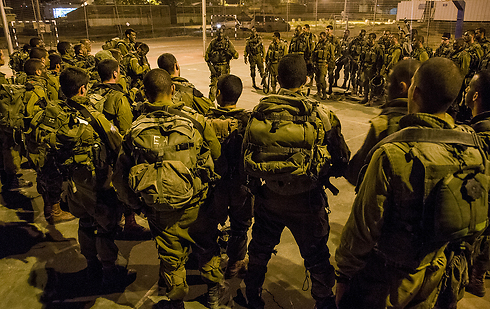 Security officials estimate that these institutions engage in laundering money that funds Hamas' terror activities under the guise of civilian activity. The Civil Administration further noted that Hamas uses these institutions to consolidate support by taking advantage of weak populations.

IDF forces also arrested the manager of the Hamas-run television channel Al-Aqsa TV in the West Bank. Before moving to focus on Nablus, the flashpoint town of Hebron was at the center of rescue efforts. The kidnapping of Gil-Ad Shaer, Naftali Frenkel and Eyal Yifrach last Thursday was likely undertaken by a Hebron based terror group, army officials says, and thus highlights security forces' inability to deal with terror in the increasingly hostile city.

"Unlike other cities in the West Bank, like Ramallah or Bethlehem which are affiliated with Fatah and undergoing massive developments, Hebron is Hamas' capital in the West Bank," an officer who served in the region in the past year told Ynet.

According to them, the Hebron area has been scene to many planned attacks and kidnappings which security forces have worked to nip in the bud in overnight arrest raids. "These are things which do not happen Nablus or Jenin, where the epicenter of violence is the refugee camps surrounding the town, and not so much within the towns themselves."

Prime Minister Benjamin Netanyahu appeared before Israeli media Monday alongside Defense Minister Moshe Ya'alon and IDF Chief of Staff Lt.-Gen. Benny Gantz and said "Anyone trying to harm Israeli civilians will be harmed in return." At the moment we are focusing on one mission: returning the teens who were abducted and we are acting against Hamas," said Netanyahu. "We've arrested more than 100 Hamas operatives. We are taking additional actions (that can't be elaborated on)."

The comments from all three leaders made it clear that current operations in the West Bank are meant to exact a high price on Hamas for any actions taken against Israel. "We've begun an effort in which Hamas is paying a heavy price," said Ya'alon.

Netanyahu spoke with Palestinian President Abbas Monday, and a statement from Abbas' office stressed the need "for neither side to use violence, especially when Abbas' stance is that the Palestinians must continue working incessantly to bring to the release of Palestinian prisoners, whose release was agreed upon in every signing of a permanent accord with Israel."