US Jews rally in support of kidnapped teens

Hundreds of Israelis, pro-Israel supporters gather outside DC embassy to call for immediate release of Naftali, Gil-Ad, and Eyal.

WASHINGTON – Hundreds of Jews, Israelis, and pro-Israel supporters gathered Wednesday outside the Israeli Embassy in Washington, D.C. to demonstrate their support for the three teens abducted in the West Bank.

The Israeli Ambassador to the US Ron Dermer participated in the protest, as did Democratic House members Ted Deutch and Eliot Engel. 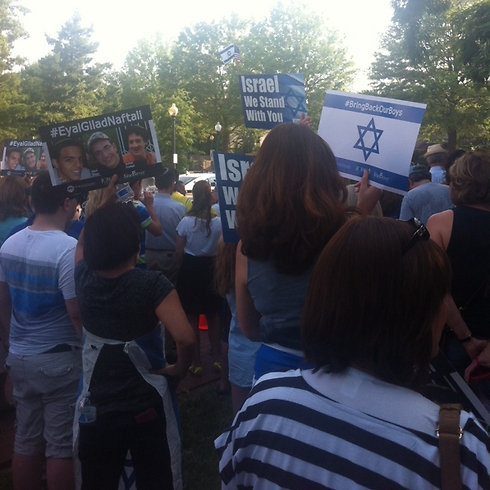 The participants tied yellow ribbons around a tree to mark the absence of Naftali Frenkel, Gil-Ad Shaer, and Eyal Yifrach, calling for their immediate release. The local Jewish community of Los Angeles is expected to hold a similar demonstration on Thursday.

Ambassador Dermer emphasized that Palestinian President Mahmoud Abbas' condemnation of the kidnapping must be followed up action. The Israeli diplomat said the right way for Abbas to condemn the act was to break his alliance with those responsible for the abduction.

Engel, the House representative from New York's 16th district, told the assembled protesters that he would not allow the US to fund the Fatah-Hamas unity government. His colleague from Florida's 21st district stressed that "these are out boys" and that unity was needed to end terrorism.

The American Jewish community has come together in recent days, gathering and praying for the safety of the three abducted Israelis: The Jewish Federations of North American released a statement expressing solidarity with Israeli security forces; the Union for Reform Judaism post a prayer for the three teens on its website; and the Orthodox Union organized prayer vigils around the clock.

Earlier in the week, some 250 Jews gathered outside the Israeli consulate in Manhattan to pray for the safety of the kidnapped boys. The crowd, composed mainly of local high school students, held pictures of the abducted with the hashtag #BringBackOurBoys and waved Israeli flags. Others carried signs saying "Palestinians are terrorists."