After tense vote passes by razor-thin margin, BDS makes headway in US; move slammed by US Jews as 'driven by hatred of Israel.'

WASHINGTON - The Presbyterian Church (USA) on Friday became the most prominent religious group in the United States to endorse divestment as a protest against Israel's West Bank policies and practices.

The nearly 1.9 million members the Church USA voted Friday after a contentious debate to divest from three companies that provide supplies to Israeli forces and settlers in the occupied West Bank. 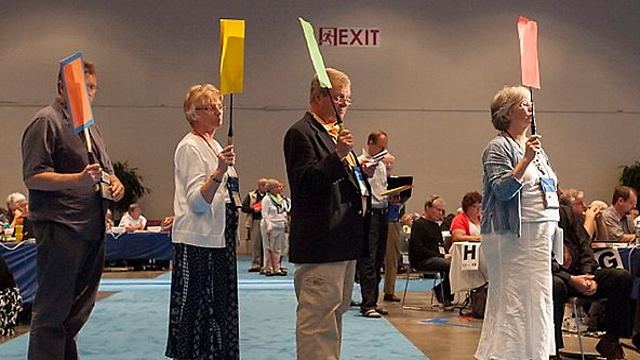 "We as a church cannot profit from the destruction of homes and lives," said Reverend Gradye Parsons in a statement about the decision at its meeting in Detroit. "We continue to invest in many businesses involved in peaceful pursuits in Israel."

Assembly moderator Heath Rada emphasized the decision "in no way reflects anything but love for both the Jewish and Palestinian people," the news service said. But the American Jewish Committee said the vote was "driven by hatred of Israel."

The measure also included a reaffirmation of Israel's right to exist, an endorsement of a two-state solution and encouraged interfaith dialogue, The New York Times reported.

It also included a provision to encourage "positive investment" to improve the lives of Israelis and Palestinians, the Times said.

The close vote came after a week of intense lobbying and "most contentious debate of this assembly," the church's news service said, noting that divestment has historically been seen as a "last resort" after "other engagement tools have failed."

"We are greatly disappointed by the vote in favor of divesting from companies doing business with Israel, a move that is out of step with the views of the majority of Presbyterians in the pews at the community level," said Rabbi David Sandmel, ADL Director of Interfaith Affairs, who attended the conference and was present during the deliberations.

"The claim by the PC(USA) that it does not support the boycott, divestment and sanctions movement is simply not reflected in this resolution and the overall tone of the discussions.

The decision is expected to reverberate well beyond the church. It comes amid discouragement over failed peace talks that have left activists desperate for some way to affect change and as the broader movement known as BDS - or boycott, divestment and sanctions against Israel - has gained some momentum in the US. 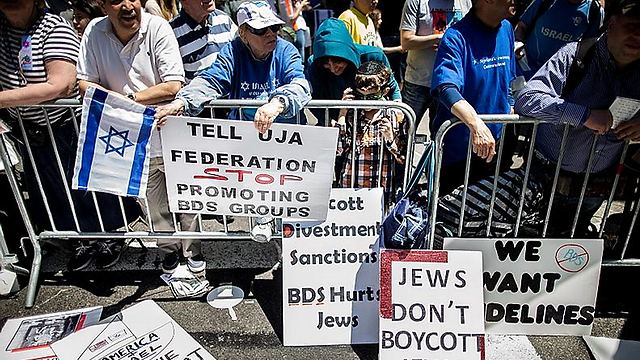 'Move driven by hatred of Israel'

Presbyterians who advocated for divestment insisted their action was not part of the broader boycott movement.

Israeli officials, along with many American Jewish groups and their supporters, have denounced the campaign as an attempt to delegitimize the Jewish state. In a separate vote, the assembly also voted to re-examine its historic support for a two-state solution.

The top Presbyterian legislative body has been considering divestment for a decade. Representatives of the Presbyterian socially responsible investment arm told the national meeting in Detroit that their efforts to lobby the three companies for change had failed.

Carol Hylkema of the Israel/Palestine Mission Network, a Presbyterian group that advocates for Palestinians and spearheaded the drive for divestment, said their action was modeled on the divestment movement to end apartheid in South Africa.

The vote was the subject of intense lobbying both from within and outside the church. Rabbis and other members of Jewish Voice for Peace, which advocates for Palestinians, lined the halls of the meeting and prayed in vigils outside the convention center wearing T-shirts that read, "Another Jew Supporting Divestment." Other rabbis and their Presbyterian supporters held panel discussions and sent letters to delegates urging them to vote no.

Rabbi Rick Jacobs, head of the liberal Union for Reform Judaism, which is the largest branch of American Judaism, addressed the delegates twice, urging them to vote against divestment.

He offered to arrange a meeting for the two top Presbyterian executives next week in Jerusalem with Prime Minister Benjamin Netanyahu to discuss church concerns, if Presbyterians rejected the divestment proposal. After the vote, Jacobs said the denomination as a whole is no longer "a partner for joint work on Israel-Palestine peace issues."

In leading an effort to strike down the proposal, Frank Allen of the Central Florida Presbytery told delegates, "Divestment will not end the conflict and bring peace. Divestment will create dissension. Dialogue and relationship building will lay the groundwork for true peace." Bill Ward of the Presbytery of the Inland Northwest, based in Spokane, Washington, argued the proposal was not an attack on Israel. The measure adopted Friday reaffirms Israel's right to exist. "It is motivated by stewardship integrity, not partisan political advocacy. It is not anti-Israel nor is it pro-Palestinian beyond the matter of human rights," Ward said.

Two smaller US religious groups have divested in protest of Israeli policies: the Friends Fiduciary Corp., which manages assets for US Quakers, and the Mennonite Central Committee.

Motorola Solutions said in a statement that the company follows the law and its own policies that address human rights.

Hewlett-Packard said its checkpoints for Palestinians were developed to expedite passage "in a secure environment, enabling people to get to their place of work or to carry out their business in a faster and safer way." Caterpillar has said it does not sell equipment to Israel, just to the US government.

A church spokeswoman estimated the value of the Presbyterian holdings in the companies at $21 million.

Associated Press, AFP and Reuters contributed to this report.