Ya'alon's comments came as IAF jets carried out a number of airstrikes in Syria after an anti-tank missile that originated in the war-torn country killed a 13-year-old boy and wounded four others, including the boy's father Sunday morning. 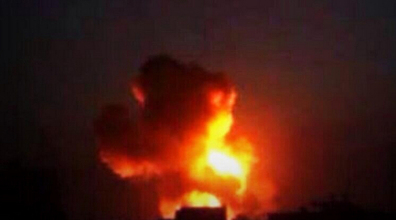 Ya'alon expressed his condolences for the death of Mohammad Karakara, who will be laid to rest noon Monday in his town of Aarabe, and vowed Israel would "react firmly and aggressively to any provocation or attack on our sovereignty".

The burst of violence in the north has added to an already tense situation in Israel, where forces have spent the past week and half in a broad ground operation in the West Bank in search of three teenage boys believed to have been abducted by Hamas militants.

Israel has carefully monitored the fighting in Syria, but has generally kept its distance and avoided taking sides.

On several occasions, mortar shells and other types of fire have landed on the Israeli side of the de facto border, drawing limited Israeli reprisals. Israel is also believed to have carried out several airstrikes on arms shipments it believed to be headed from Syria to Hezbollah militants in neighboring Lebanon.

Residents of northern Israel reported hearing explosions from across the border with Syria.

The strikes were launched shortly after midnight, when IAF jets fired missiles on Syrian army positions on the Syrian-controlled Golan Heights.

Syrian opposition sources claimed that there were 3 attacks on Syrian army positions. They said the headquarters of Syria's 90th Division, which is stationed in Quneitra, was also attacked.

The IDF Spokesperson's Unit said Sunday's cross-border missile attack on Israeli vehicles was a "continuation of a number of attacks in recent months against IDF forces near the border in general and this area specifically. The IDF will act with determination at any time and in any way it sees fit to protest the citizens of the State of Israel."

Earlier in the day, the IDF responded to the killing of Israeli teen Karakara by firing artillery rounds into outposts on Syrian territory, but later discussions raised the possibility of attacking other targets on the Syrian Golan.

Investigations conducted Sunday night in GOC Northern Command raised the possibility that the advanced Kornet anti-tank missile was fired from an area contested by the Syrian army and rebel forces.

The IDF believes the attack on the Syrian border had no connection to recent developments in the Gaza Strip or the West Bank. The full investigation will also examine why IDF outposts in the area failed to spot the terror cell.