Naftali Frenkel's mother flies to Geneva to speak in front of top UN rights group in bid to influence involvement of international community, against government's wishes.

Rachel Frenkel, mother of abducted teen Naftali Frenkel, has flown to Geneva to appear before the UN Human Rights Council, Ynet learned. Tomorrow, she will be joined by the families of the two other teens, Gil-Ad Shaer and Eyal Yifrach, kidnapped by Hamas.

The initiative to send the families to the UN belongs to Israel's Young Ambassadors, who are visiting Switzerland. The high school students raised the possibility of inviting the teens' parents during talks they held in Geneva.

UN Watch executive director Hillel Neuer is organizing the visit along with the UN council. Up until Monday afternoon, the parents were still considering their participation, with the Ministry of Foreign Affairs recommending that they refuse.

Eventually, it was decided that Ministry of Foreign Affairs employee David Meron will accompany the mothers and coordinate their meetings upon their arrival.

Frenkel is expected to speak before the Council and call on the international community to intervene in order to help in the teens' rapid release. In addition, the parents will most likely hold a press conference and conduct meetings both with UN Council sources and Red Cross representatives.

The parents of the teens gathered Monday morning at the Shaer family home in Talmon. "We sat together and came up with different ideas regarding possible ways of actions," Ofir Shaer, the father of Gil-Ad, told the media at the end of the meeting. 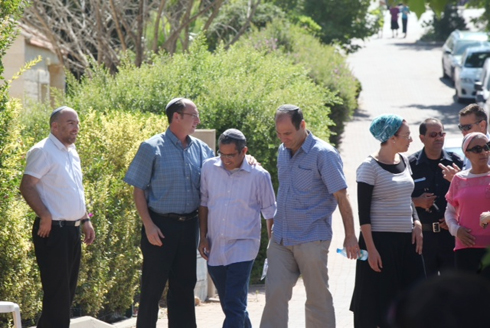 "We met Rabbis of Nof Ayalon, Talmon and Elad, and it was agreed to increase the cooperation between the communities. Each family is determined in their desire to see the children at home as soon as possible."

Earlier Monday, Minister of Science, Technology and Space Yaakov Peri visited Talmon. On Friday, Prime Minister Benjamin Netanyahu paid a visit to the families of the kidnapped boys, after which Bat Galim Shaer, mother to Gil-Ad's said: "We believe that in the hands of the government, more pressure could hasten the return of the boys and we requested from the prime minister to act accordingly."

Speaking at the conclusion of the two hour meeting with Netanyahu, Bat Galim added, "The passing days set difficult challenges before us, but we are a strong nation, a nation that wins. What I'm doing in these complicated days is to try to think positive and think good thoughts."

As search efforts to find Eyal Yifrach, Gil-Ad Shaer and Naftali Frenkel enter their 14th day, a senior IDF official said: "The IDF will have exhausted search operation in Hebron area within two or three days." According to the official, in the coming days IDF will decide where to shift the focus of Operation Brother's Keeper.

According to the IDF, the army detained 37 Palestinians overnight Sunday as the arrest campaign entered its 11th day, with no sign of three teenagers thought kidnapped by Hamas. 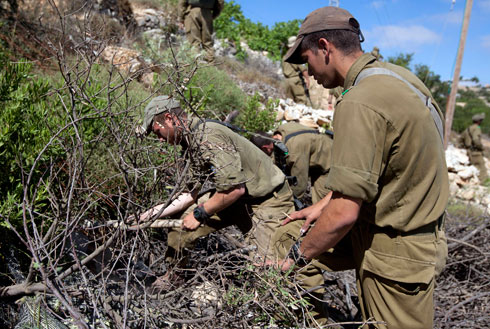 Forces also raided seven Hamas-affiliated institutions, as part of a larger attempt to dismantle Hamas' presence in the West Bank by targeting its charities and welfare organizations.

Meanwhile, Israel has stepped up its Hasbara efforts in the country where the eyes of the world are currently fixed – World Cup host Brazil. Dozens of Israelis who were enjoying themselves on a sunny beach in Rio de Janeiro were surprised to see an aircraft carrying the banner with the hashtag #BringBackOurBoys, used to rally support for the missing teens. 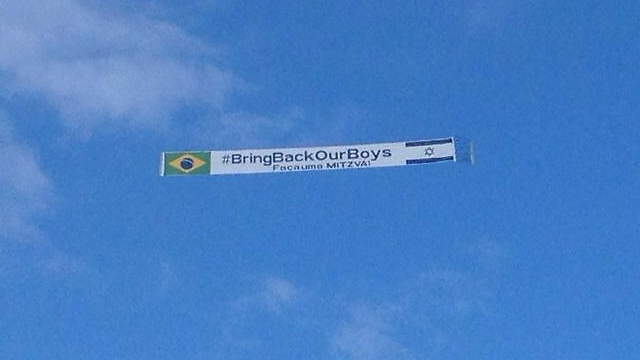 Banner flown in the skies of Brazil

"I rubbed my eyes in disbelief," said Vered from Hod HaSharon who was visiting the country with her husband to watch the World Cup. "Here in Rio, with thousands of tourists from around the world, we see a banner that is both so Israeli and so touching. I was with dozens of Israeli tourists from Israel, we jumped up in amazement and simply applauded."

Simultaneously, Brazil's Jewish community held a large demonstration with protestors carrying Brazilian and Israeli flags, calling on the culprits behind the kidnapping to immediately release the teens.

Many of the passersbys who arrived in Brazil for the World Cup – and have no connection to Israel – stopped, asked questions and expressed their support.

"We will turn the topic into an international subject of debate, in a time when the whole world's attention is focused towards Brazil," said one of the organizers of the rally who is also one of the heads of the Jewish community in Brazil.