For the first time since kidnapping, Hamas chief Khaled Mashal comments on incident, says movement has no information regarding the fate of the three Israelis, urges action to be taken to release Palestinian prisoners.

Hamas leader Khaled Mashal addressed the kidnapping of three Israeli teens for the first time on Monday, saying that the Gaza-based organization had no information regarding the fate of the abducted teens. 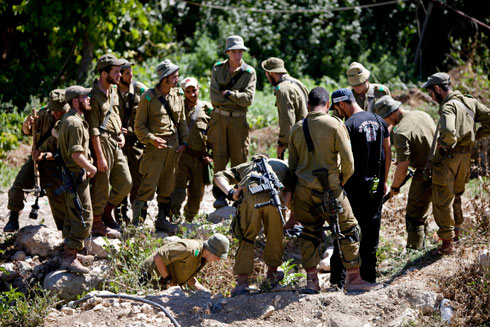 In an interview with Al-Jazeera, Mashal said that he "blesses the hands of those who kidnapped them, since the Palestinian prisoners should be released from the Israeli prisons." The Hamas leader rejected claims sounded among Palestinians that the attack was an Israeli invention.

"No senior official in Israel has an interest in playing with Israelis' nerves and strumming on the strings of Israeli security," he said.

Masha, who leads Hamas' Political Bureau referred to Israeli allegations that he is the one who gave the green light for the attack during a speech that was broadcast on television a month before the kidnapping.

He stated that Hamas' military wing knows its responsibility and does not wait for codes given by the movement through the television screen. "The Palestinian people live under occupation. All that we want, and our top priority, is that our lands be liberated," he said.

"Israel will pay the price for its occupation of Palestinian lands. Netanyahu's actions have caused fury and therefore he is responsible for the disappearance of the Israelis."

'Palestinians understand we're against Hamas, not them'

The Palestinians know that the IDF action currently underway in the West Bank targets Hamas and not them, a senior army officer told Ynet on Monday. The IDF launched Operation Brother's Keeper last week, following the abduction of three Israeli teens near Hebron on June 12.

Regarding the number of Palestinians wounded and the Palestinian resistance to Operation Brother's Keeper, the officer said that the casualty rate was low.

"I wish every army in the world could take 5,000 soldiers into villages with the resistance we encountered, and the result would be four Palestinian deaths, with three of them justified," he said.