Sunni militants in the city of Takrit
Photo: AFP

US: Syria may have launched airstrikes in Iraq

Iraqi officials report 120 more casualties in Syrian airstrikes that attempted to target ISIS forces. 'The solution to the threat confronting Iraq is not the intervention of the Assad regime, which allowed ISIS to thrive in the first place," American official says.

US officials say there are indications that Syria launched airstrikes into western Iraq Tuesday in an attempt to slow the al-Qaeda-inspired insurgency fighting both the Syrian and Iraqi governments.

Officials said the strikes appeared to be the work of Syrian President Bashar Assad's government, which is locked in a bloody civil war with opposition groups. The target of the attacks was the extremist group Islamic State of Iraq and al Shams, which has been fighting along with the rebels opposed to Assad and has since moved swiftly across the border into Iraq.

The White House said intervention by Syria was not the way to stem the insurgents, who have taken control of several cities in northern and western Iraq.

"The solution to the threat confronting Iraq is not the intervention of the Assad regime, which allowed ISIS to thrive in the first place," said Bernadette Meehan, a National Security Council spokeswoman. "The solution to Iraq's security challenge does not involve militias or the murderous Assad regime, but the strengthening of the Iraqi security forces to combat threats." 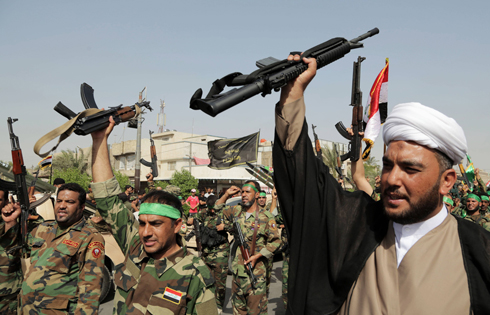 Another US official said Iran has been flying surveillance drones in Iraq. The officials spoke only on grounds of anonymity because they weren't authorized to discuss the issue publicly.

In an unusual twist for the long-time foes, the US and Iran find themselves with an overlapping interest in stabilizing Iraq's government. However, while Iran wants to preserve Shiite control of Iraq's government, the US is pressing leaders in Baghdad to create a more inclusive political system.

US and Iranian officials have had some direct discussions on the matter, though the Obama administration has ruled out the prospect of direct military involvement.

The official also said that Iran has been flying surveillance drones in Iraq. Meanwhile, the US is sending military advisers to assist Iraq. The official spoke only on grounds of anonymity because the person was not authorized to discuss the issue publicly.

At least 57 Iraqi civilians were killed and more than 120 were wounded in the airstrike carried out by Syrian warplanes, CNN reported earlier Thursday. The attack took place in the area of Anbar province on Tuesday.

Sabah Karkhout, the head of Iraq's Anbar provincial council, told CNN that markets and fuel stations were hit by the attack. "Unfortunately, (the) Syrian regime carried out barbarian attacks against civilians in Anbar province," he told CNN on Wednesday.

The Islamic State in Iraq and al Shams and Jabhat al-Nusra, both al-Qaeda branches, decided to join forces in the Syrian city of Abu Kamal, near the border with Iraq. ISIS has already taken over the northern Iraqi city of al-Qaim.

This isn't the first Syrian airstrike in Iraqi territory, according to Sunni tribal leaders from the border area between the two countries. In recent days, according to Arab media reports, Syrian aircrafts have carried out several attacks in the border area that killed and wounded dozens of people. The tribal leaders spoke with Al-Arabiya on Tuesday, claiming that Syrian fighter planes had carried out the raids, and not American aircrafts as was initially published. Earlier Wednesday, a Syrian official denied claims made by Arab media outlets, according to which Syrian warplanes struck the area of Al-Qaim, a town on the border between Syria and Iraq, as part of bring the Islamist militias to a halt. It was originally reported that unmanned US aircrafts had carried out the attacks, but the White House denied responsibility for the incident.

ISIS has recently seized broad areas in Iraq. With the assistance of Sunni tribes, it took over for a period of time the official border crossing between Iraq and Jordan. Forces also took over Iraq's main oil refinery at Baiji, in northern Iraq.

For ISIS, taking control of the western region of Iraq is a big step towards their goal – eliminating the modern borders between the countries and creating a new state that dominates the areas of Iraq, Jordan and Syria. According to the United Nations, more than 1,000 people from the area, most of them civilians, have been killed in the past three weeks.