The al Qaeda-linked Abdullah Azzam Brigades had urged Lebanese Sunni Muslims to attack the Iranian-backed Shiite militant group Hezbollah a day before Wednesday's suicide bombing in central Beirut. The suicide bomber who blew himself up at the Beirut hotel and his accomplice who survived the blast are citizens of Saudi Arabia, Lebanese officials said Thursday. No claims of responsibility have been made for the attack but the Abdullah Azzam Brigades says it has carried out recent bombings in Lebanon, including an attack on the Iranian embassy in November which killed 23 people, mostly civilians.

The group posted the message on Twitter on Tuesday, before a suicide bomber - said by Lebanese authorities to be a Saudi national - wounded three security officers in a hotel in the capital close to the Saudi Arabian embassy. 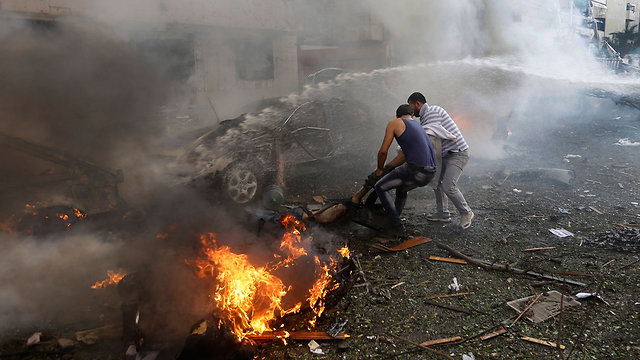 Attack on Iranian embassy (Photo: AP)
Escalating sectarian violence in the region has seen Hezbollah send hundreds of fighters to neighbouring Syria to boost the forces of its ally President Bashar Assad against mainly Sunni rebels seeking to topple him. Gulf states fear Sunnis in Lebanon, Syria and Iraq face oppression at the hands of Iran and its Shi'ite allies in the region. "The soldiers of the Party of Iran (Hezbollah) and its leaders are beneath you, so gain the approval of Allah by killing and assassinating them!" Sirajuddin Zurayqat, a cleric for the group, said in the audio message.

"You will not have the life of the secure ones until security returns to the people of Syria and Lebanon," he said, according to a translation by the US-based SITE intelligence group, which monitors militant websites.

The bomber detonated his explosives at Beirut's Duroy Hotel during a security raid on Wednesday evening, and died in the blast. Another man was wounded and was being questioned by security agents at a Beirut hospital.

A security and a judicial official told The Associated Press that a preliminary probe shows the two attackers entered Lebanon with Saudi passports on June 11. The two officials spoke on condition of anonymity because they were not allowed to talk to the media during an ongoing investigation.

The blast toward the end of Wednesday evening rush-hour took place inside the Duroy Hotel in Raouche district, a posh neighborhood of apartment towers and upscale hotels perched on cliffs of Beirut overlooking the Mediterranean Sea.

The Lebanese Red Cross said 11 other people were also wounded in the hotel explosion.

It was the third suicide bombing in Lebanon in less than a week and sparked fears of renewed violence in a country that has been deeply affected by the civil war in neighboring Syria.

On Monday, a suicide bomber blew himself up near a checkpoint outside a cafe just after midnight in a primarily Shiite neighborhood where the militant Hezbollah group has a strong presence. The bombing killed one person and wounded 20.

Syria's civil war has spilled into neighboring Lebanon on numerous occasions and inflamed sectarian tensions. A series of car bombs have struck Shiite areas across Lebanon, killing dozens of people. The operation also came amid mounting regional tensions over the events unfolding in Iraq.

A string of security incidents over the past week has rattled Lebanon, and Beirut in particular, after what had been a calm and stable stretch of several months.

Another bombing in eastern Lebanon last week killed a police officer and wounded several others.

The bombings, coupled with the detention last Friday in Beirut of people accused of being part of alleged Sunni extremist militant sleeper cells, has given rise to concerns that Lebanon could see a new wave of violence linked to the Syrian conflict.