Amar Abu-Eisha, 33, and Marwan Kawasmeh, 29, from Hebron, Palestinian terrorists who previously served time in Israeli prisons, are the two main suspects in the abduction of the three Israeli teens - Eyal Yifrach, Gil-Ad Shaer and Naftali Frenkel, it was cleared for publication on Thursday, two weeks after the teens had been taken.

The Shin Bet said in a statement both Hamas men, believed to have played a central role in the kidnapping, had been wanted and at large since the kidnappings, adding that several other Palestinians suspected of involvement in the abductions were being questioned.

Hamas officials in Hebron confirmed the two suspects were members, and said IDF troops have targeted the men's homes since the beginning of the operation.

The officials, speaking on condition of anonymity because of fears for their safety, said the brothers and wives of the two men had been taken into custody, though the women have since been released. They said troops had entered the homes several times, conducting intense searches and confiscating certain items as evidence. 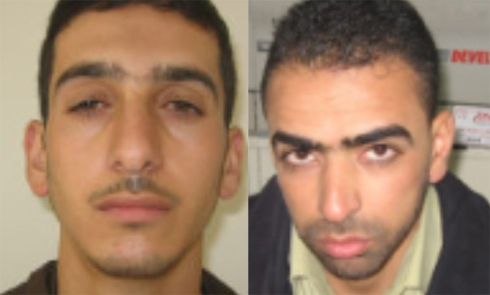 A senior Palestinian intelligence official said the two suspects are believed to be hiding and that Palestinian security forces were also searching for them. He said the fact that the two men have been missing since the kidnapping is "clear evidence they have links with the abduction."

Prime Minister Benjamin Netanyahu said the suspects were only part of the group behind the kidnappings and reiterated his call on Palestinian President Mahmoud Abbas to abrogate a unity pact with Hamas, a group that holds power in the Gaza Strip and calls for Israel's destruction.

Already at 18 years of age, Kawasmeh was arrested, tried and sentenced to ten months in Israeli jail, where he served his time until August 2004. He has since been arrested on four other occasions and has been held in administrative detention.

In his most recent investigation in 2010, he admitted to having been recruited to the Hamas military wing in the Hebron area in 2009. He was involved in military training in caves in the Hebron area, was active in obtaining raw materials for the production of explosives and assisted the organization in recruiting additional youths for Hamas activities. For these actions, he was imprisoned until March 2012.

Eisha was first arrested in November 2005,investigated and held in administrative detention until June 2006. He was arrested again in April 2007 and held for a short time.

Eisha's father, Omar, said he last saw his son at a wedding party on June 12 before he disappeared later that night. "I don't know where he is," he said, asking whether Israel might have arrested him.

He said Israeli forces have arrested seven family members, including two other sons, and that the family's homes have been raided eight times.

"They have searched every item of the house, every centimeter of the house," he said, including a sheep pen outside the home. "They have turned the whole house upside down, but they did not find anything."

He claimed Amar, who is married with three small boys, was not involved in politics, but acknowledged that his son had spent seven months in Israeli custody in 2005.

He also said he himself had been arrested by Israel in 1995 for hiding a Hamas fugitive - and said Israel had demolished his home as punishment. He said another son was killed by Israel in November 2005. The Israeli army confirmed the death, saying he had been throwing a bomb at Israeli troops at the time.

Hundreds of people arrived at the Nof Ayalon synagogue on Thursday evening for a rally of prayer and solidarity with the families of the kidnapped teens.

"We've known the identities (of the suspected kidnappers) for two weeks know," Rachel Frenkel, Naftali's mother, told Ynet. "What we need to know now is where they are."

Earlier, the families met at the Frenkel home to coordinate the next steps in the campaign to bring to the return of their sons.

"Intelligence knows exactly what they're doing when they publish the names, I hope this advances (the investigation)," Frenkel added.

Meanwhile, the IDF in the past 24 hours has expanded the search for three missing teens. Security forces have been using advanced methods and technological means for locating missing persons and for finding evidence that could help track down the abducted teens.

In tandem with that, security forces are searching wrecking facilities for stolen cars in one of the villages north of Hebron.

In addition to using both day and night observation means, including thermal cameras that can differentiate cold and heat, soldiers from the Engineering Corps are searching the woods west of the Gush Etzion Junction, several hundred meters from where the teens are believed to have been taken. The Engineering soldiers are using advanced detectors and sapper knives to search the ground.

The IDF added observation blimps to the search effort, mostly in the area north of Hebron. The blimps join tracking dogs, Air Force drones, artillery corps drones and radars, all utilized in the search.

Ten Palestinians suspected of terror activity were arrested overnight Wednesday, most of them at the Hebron area. A Palestinian was critically wounded while trying to escape IDF troops during a raid at the as-Samu village south of Hebron.