We trust the IDF but we are not naive, say abducted teens' mothers

Ahead of the support rally planned for Sunday night at Rabin Square in Tel Aviv, the mothers of the three abducted teenagers – Naftali Frenkel, Eyal Yifrach and Gil-Ad Shaer – met on Thursday with Yedioth Ahronot for their first joint interview.

"People tell us Naftali, Gil-Ad and Eyal are everyone's kids," Rachel Frenkel, Naftali's mother, said. "And everyone wants to do something to bring them home. So we want to see the entire Israeli society with us on Sunday, for everyone to be together." 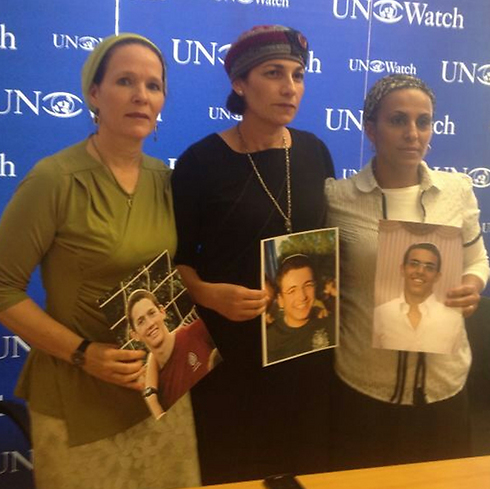 Three mothers at UN in Geneva
"We want to feel everyone's presence with us," Bat-Galim, Gil-Ad's mother, added.

"It's important that a lot of people come, to show unity and for the boys as well," Iris Yifrach, Eyal's mother, said. She's the quiet one among the three, standing there with a frozen expression, while Rachel and Bat-Galim allow themselves to smile sadly.

On Wednesday, Bat-Galim strayed a bit from the restrained stance the families have shown so far, and criticized the political echelon during a visit to the Knesset.

"You're confused, an agreement with the (Palestinian prisoners) hunger strikers is a grave mistake," she said. She later received a phone call from officials clarifying no agreement had been signed with the imprisoned terrorists.

"We completely trust the government and the IDF," she clarifies, and Rachel is quick to stress: "But we keep our eyes open to see that everything is going as it should."

"We support the IDF 100 percent, it's doing an incredible job," Bat-Galim says, as Frenkel interjects once more: "We completely support them, but we're not naive. If we one day feel like they're not doing everything, we'll know how to respond. We're not naive people."

While Yifrach adds, "We have one goal – to bring back the boys, and we will do everything to bring them back. Whatever it takes." 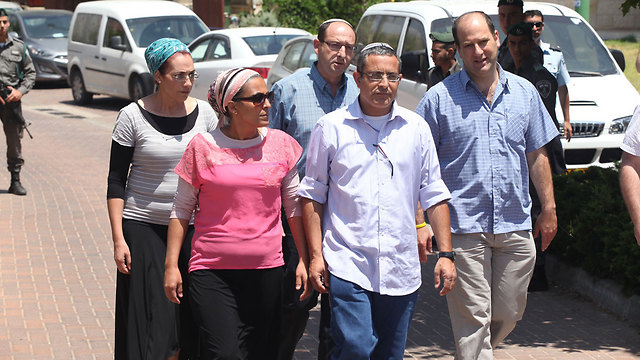 Parents of the kidnapped teens in Talmon (Photo: Motti Kimchi)

The only moment during the interview that the three smile is when we ask how if they're imagining what the boys' return from captivity would look like.

"Of course," Bat-Galim answers quickly. "It will be the greatest party in the world."

Iris laughs and tells the other two women that "people are already bringing us stuff and say that it is for the thanksgiving party."

Rachel updates the two that "we have everything ready already. From A to Z. We even have a rabbi to welcome them home – Rabbi Adin Steinsaltz (the president of the 'Makor Chaim' yeshiva where Frenkel and Shaer study)." But then she adds seriously, "truthfully, our biggest problem, I hope, would be to rehabilitate him after the horrible experience they've been through. We'll give them everything they need."

On Sunday, the three mothers will attend a mass rally at Rabin Square. This is the first event organized by the "Bring Back Our Boys" Campaign – that coordinates with the families, but is not sanctioned by them.

Well-known singers will perform at the rally, among them Miri Mesika, Rami Kleinstein, Svika Pick and Lior Narkis.

The Tel Aviv rabbi, Yisrael Meir Lau, will read a chapter from Psalms, which will be followed by a speech from president-elect Reuven Rivlin, who has been declining offers to attend official events until he is sworn in, but accepted the families' request to attend the rally.

On Thursday night, hundreds of members of the students union flooded the streets of Tel Aviv and handed out flyers, stickers and T-shirts to people attending White Night events, with the writing "We don't sleep without the boys."

On Friday morning, hundreds of cyclists were supposed to ride from Yifrach's house in Elad to the Shaer home in Talmoan and then to the Frenkel home in Nof Ayalon, but due to the heat wave, the ride was postponed till next week.