The Shadadi family in their home after it suffered a direct hit of a Kassam rocket
Photo: Avi Rokach

Yaron Shadadi was walking with his dog near the paint factory when it went up in flames after a rocket attack from Gaza; he and three others were wounded in the blaze.

Of the four people lightly wounded in Saturday night's Sderot factory fire, caused by a direct rocket strike, one of them is no stranger to destruction from Gaza terrorists.

Yaron Shadadi, whose home suffered a direct hit during Operation Pillar of Defense in November 2012, was walking his dog near the plant not long after the rocket struck Saturday night. He was evacuated to Barzilai Medical Center in Ashkelon. 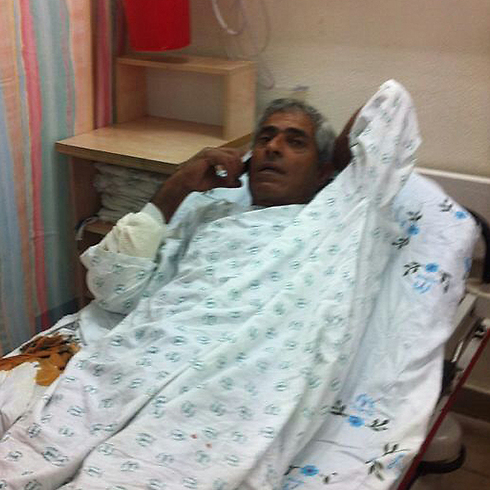 Yaron Shadadi in the hospital after being hit in Sderot.

"I live in the area," says Shadadi. "We were walking on the sidewalk a hundred yards from the factory, about half an hour after the rocket strike. Suddenly, there was an explosion in the factory and flames started rising. A fireball flew a distance of 200 meters from the plant into Sderot (and) there was a sudden heat wave, something terrible. The blast knocked me over and I was wounded on the hands and feet. I could feel I was burning in all the exposed parts of my body, and I have a terrible headache." 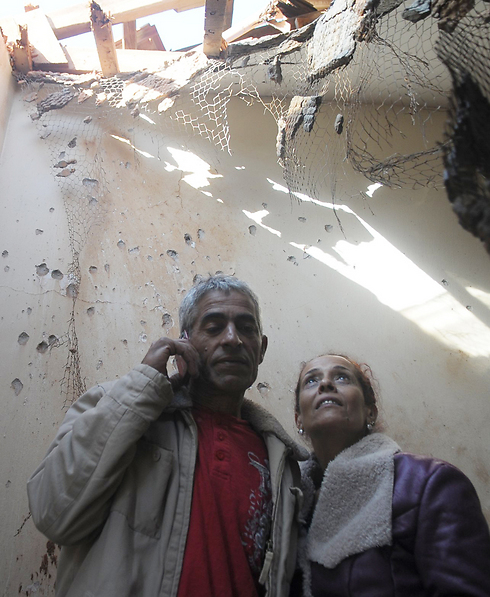 The Shadadi family after their home suffered a direct Kassam hit during Operation Pillar of Defense (Photo: Avi Rokach)

Yoni Avraham was in the area with a friend after visiting one of the IDF bases in the region. "I heard a crazy explosion, I thought there were wounded, and I ran inside to try to help," he said Saturday night from the hospital where he was being treated for his injuries. "I went in to see if there were any people, pushing away children who had climbed up to see in. There were several small explosions and suddenly there was a crazy explosion that flung a gas cylinder into the air, burning my hands and neck." 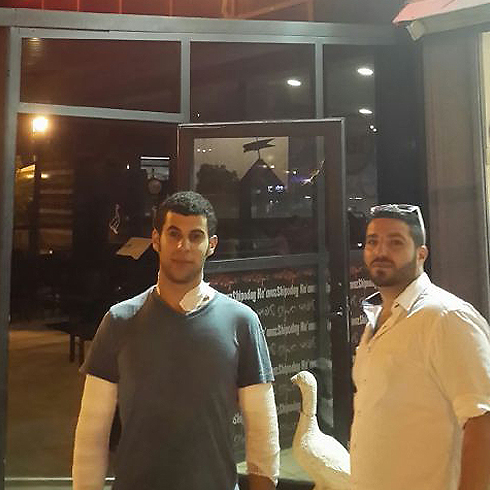 Yoni Avraham (left) who was wounded in Sderot.

His friend had stayed in the car, and recalled seeing a flying gas canister. "It flew like a rocket, flying over me. It was terrifying," he said. The four wounded were all treated at Barzilai and send home a few hours later.

The rocket strike totally destroyed the paint factory, said its manager, who arrived at the scene after the strike. "The factory has been burned to the ground," he said. "At the moment we are occupied with assessing the damage."

The fire set off secondary explosions as cans of paint combusted, as 10 firefighting and rescue teams successfully battled to prevent the fire from spreading to nearby factories. Meanwhile, the four factory workers inside were able to flee the flames.

Another rocket landed in an open area, both falling shortly after the "code red" rocket alert sounded in Sderot and the Hof Ashkelon region.

"We were outside when the siren sounded, but just as it started the rockets were already falling," said Noy, a Sderot resident. "It was not enough of a warning."

"We are working to restore calm to the south," said "Ya'alon. "We will not tolerate attempts by terrorist organizations in the Gaza Strip to disrupt the daily routine of the residents of the south, and, as in recent days, we will respond harshly to terrorists who fire at Israel, and we will deliver them a painful blow."